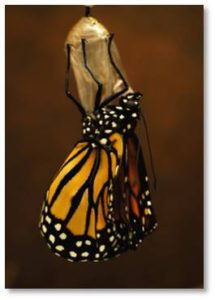 Following up on my previous post about job perks demanded by Generation Z workers, CareerCast has issued its list of the “10 Best Jobs for Generation Z.” This is the latest wave of young people emerging from their college graduations like butterflies from the cocoon. Career Cast defines them this way,

“Those born from 1995 through 2010 make up Generation Z. This demographic accounts for 25 percent of the total population, and the first wave of these young professionals is in the process of leaving school for the labor market.”

They are entering the work force with the ingrained belief that they are all special and the assurance that everything they want and need will be there for them, as their parental units have always ensured. Will these jobs support that belief? More importantly, will these jobs pay them the salaries that they need to start families and live well? Career Cast quotes a FasCo study that says 40 percent of the consumers of goods and services by 2020 will be Generation Z. “That translates to work done by young people, for young people.” Well, maybe. 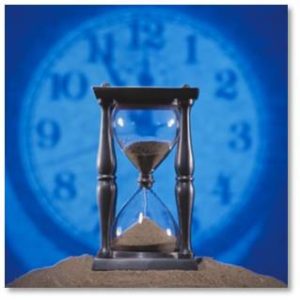 I have sorted the jobs by salary instead of growth opportunity for two simple reasons:

In short, Generation Z is going to have a very short period in which to prosper. Between the time when they finish paying off college debt and they day they’re laid off, they will probably have about two years to save some real dough.

The good news is that, unlike the Boomers, they plan to start saving early. Kyle Kenning, their Online Content Editor acknowledges that, “early planning and smart savings strategies are paramount for the new generation, starting from the outset of their careers.” These kids have been burned by outrageous college debt the way Baby Boomers have been scarred by the 50-and-over layoff trend and our parents were traumatized by the Great Depression. They want to start saving early. Good for them.

So here are the top 10 best jobs for Generation Z as defined by CareerCast: 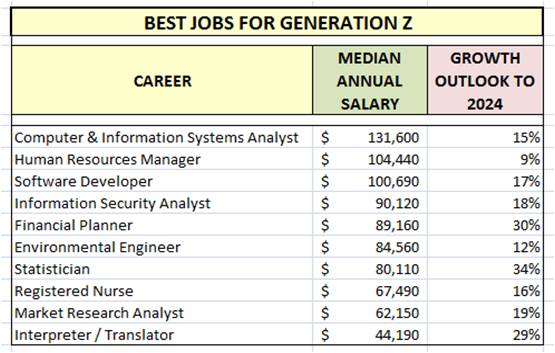 It makes sense to look at the right-hand column as well. When you do you’ll notice that the highest-paying jobs don’t also have the best growth outlook to 2024. Curious. You’ll see that the job with the lowest growth potential is Human Resource Manager. That’s only logical as companies rush to replace living, breathing human beings with robots and other mechanical devices. When a company’s workforce is made up of a highly paid executive team and mechanisms that unplug at night instead of going home, there aren’t any human resources to manage.

That leads me to wonder why Robot Maintenance Engineer isn’t on the list. Until we figure out how robots can repair other robots, some humans will have to effect the necessary changes and that will be a growth industry.

The Future Consumer Base

The highest growth potential is attributed to statisticians and financial planners. The first will be driven by technology and the analysis of Big Data for companies to market to the Gen Z consumer base. Growing mechanization will have an impact on this, however, because robots buy nothing and that will affect how much these young people will have to spend.

Financial planning is predicted to be a high-growth career because the younger demographic will need it to help them pay down debt. That will, in turn, help them to save some money for the long drought after they get laid off and can only tap the minimum wage jobs that haven’t been offshored, outsourced, or mechanized.

If I sound bleak about their prospects it’s because of the business trends I see playing out. Bank tellers, airline counter agents, and travel agents all thought they had good jobs with growth opportunities until they were replaced by ATMs, check-in kiosks and web sites.

Henry Ford once famously said that he paid his employees higher wages than the going rate because he wanted them to be able to buy his cars. A lot of executives today have lost track of that wisdom. I hope for the sake of Generation Z’s future happiness that new technologies will give them the same job opportunities the computer industry gave to the Baby Boomers. I also hope that they handle their money smarter and better.