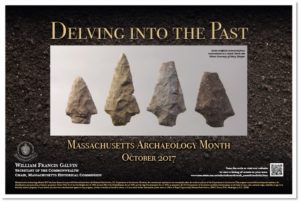 The Massachusetts Historical Commission has named October as Massachusetts Archeology Month with the theme, “Delving into the Past.” This post is going to delve into the past in a couple of ways: personal and historical.

One Sunday afternoon when our parents took us out for a Sunday drive, we stopped at an archaeology dig in southeastern Massachusetts, probably Attleboro. I don’t remember whether we got there by accident or that was our destination. Knowing my mother, who was interested in a lot of things and read widely, I think it probably was the latter.

I remember watching the dig, with squares marked off by string and people wielding trowels and brushes as they hunted for signs of New England’s indigenous tribes that and early settlers. Fascinated, I hope that they would find something big and exciting while we were there. (They didn’t.)

We began talking with one of the archaeologists, a man named F. J. Valente, who was also known as Professor Whizz, the Children’s Magician. (How do I remember this? I don’t. Keep reading.) 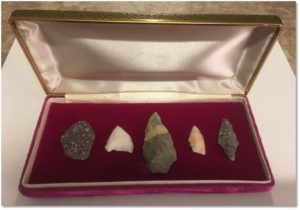 The Five Arrowheads in their case

I don’t recall how old I was at the time, but I think I was in elementary school. Like my mother, I read a lot as a kid and knew enough about the Native Americans to ask some intelligent questions. Mr. Valente liked that and we chatted for a while. He must have asked my parents for their address because some weeks later I received a surprise package in the mail.

Inside the box, I found a jeweler’s case with a gold top and red velvet bottom. When I opened it, I saw five Indian arrowheads beautifully mounted on red velvet, like jewels.

A letter came with the box, dated October 29th, but no year. (Drat) This is what it said:

“As promised I am sending a few “points.” The big one would be classed as a spear. From left to right, the materials they are made of are:

I am enclosing a folder of our Museum which is situated over Radio Station WARA in Attleboro. Maybe some Sunday afternoon this winter you would like to see it; and bring the gang. It is well worth seeing. I have no phone but if you write the first of the week, I can get an answer back before the following Sunday letting you know if I’m available.

I will be digging a few Sundays yet if sunny. I made the box the arrows are in; I hope you like it. Any questions you would like to ask at any time, I’ll try to answer for you.

PS: for many years known as “Prof. Whizz,” the Children’s Magician”

I must have written him a thank-you note and made an appointment to visit the museum because I also have a letter dated November 13th in which he gives me directions and says he can meet at the entrance. I have no memory of visiting, but it was a long time ago. 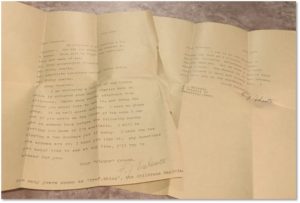 I have kept these letters, the jewel case with arrowheads and even the box for all these years. The letters have yellowed but the case and arrowheads shine as bright as the day I first saw them.

Mr. Valente must have been jeweler, in addition to amateur archaeologist and children’s magician, but my Google search has not turned up any information on him. The letters don’t give me enough information for even a Find A Grave search to uncover something. Perhaps someone who reads this will remember Mr. Valente and comment with more information.

Show Up, Speak Up

Every day is a new adventure, especially for kids, and you never know what’s going to happen. You never know who you will meet or when or even why. Some people will turn out to be important while others will slide away without leaving an impact.

The important thing is to “show up.” Engage with people, ask questions, and get involved. People respond to people who like them and who like the things they find interesting.

I’m lucky because I’m interested in a lot of things. Also, I’m incredibly curious. When we went on family vacations and visited natural wonders or historical sites where tour guides took you around, I always stayed close to the guide. That way I could ask any question I wanted without shouting and chat with the guide while we moved from place to place. I learned more that way.

Now that I lead tours of Boston for Boston By Foot, I like it when one of my tourees stays close and I love kids who ask questions. Kids often ask the best questions because they don’t accept what they’re told as a given—it’s just a place to start thinking.

Not everyone finds archaeology or the history of New England’s first inhabitants interesting. If you do, though, the Archaeology Month web site has a list of events, from Acton to Woburn. These include lectures, slide shows, readings, and exhibits, as well as hands-on opportunities to dig for yourself. And who loves digging in the dirt more than children?

Before October arrives and Archaeology Month begins, find one near you and dig into history.