More and more I hear Americans displaying their ignorance, during news interviews, in articles they write, and in things I hear others say. I find it dismaying. I’m an English major, a published author, and a fairly intelligent person who lives in the state that consistently ranks at the top of our country’s “most educated” states. If that makes me an elitist or a snob, so be it. I embrace it. 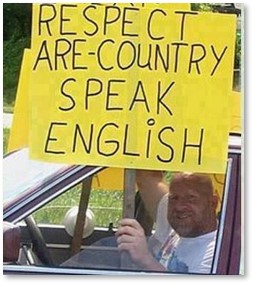 These days it seems I must suffer fools but I do not do so gladly. The ignorance to which I refer infects three main areas:

Alright, it probably occurs in many other areas but these three categories are the ones where I see and hear it the most. I was going to deal with all three in this post but, as usual, I found more than enough material for three posts. Today, I’m focusing on the language American speak every day—for better or worse. 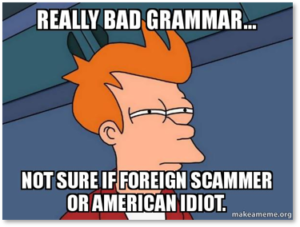 English is a pretty complex language but we start learning it in our mothers’ laps and by our fathers’ knees. If Mom and Dad don’t get it right, school is supposed to correct mistakes and teach you proper usage.

I attended parochial elementary school, where the nuns had rulers and knew how to use them. They didn’t call it “grammar school” for nothing.

From what I have observed, however, that educational correction frequently does not happen

How else does one explain the difficulty so many American have in speaking correct English? Some of the egregious errors that make the hair stand up on the back of my neck (and I’m far from alone) include:

We have the ever-present mis-use of to-too-two and your-you’re, Egregious mis-spellings. The confusion of “are” and “our.”  The inability to use apostrophes properly, particularly with plural nouns. The complete confusion about what constitutes the subject of a sentence and how to match it with the correct verb when there is an intervening prepositional phrase. It goes on and on. I did not make this up; just look at the pictures.

The great irony here is that the very people who demand all immigrants learn to speak English are often the same folks who mangle it themselves. I doubt if anyone in those pictures is an immigrant. Should I assume that all these Americans cut English class or didn’t even have an English class? 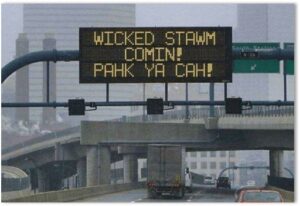 Or are they so surrounded by people who can’t speak with proper grammar that they adopt the vernacular of their region or neighborhood as protective coloration? This happens in Black cultures, for example, where they might reject using Standard English as “talking white.”

Here in Boston, we use “wicked” in ways that no one else in the country would understand. (It means “very” as in “wicked good movie” or “wicked strong coffee.”) We think it’s funny and aren’t afraid to laugh at ourselves. But no one teaches it as proper English.

While I hesitate to inject politics into this discussion, I’m aware that the Red and Blue camps account differently for the sad state of American English. Conservatives often blame teachers’ unions that protect bad teachers and keep them from being fired.  Progressives blame states that refuse to tax residents sufficiently to fund the school systems. The book “Dying of Whiteness” by Jonathan Metzel has an excellent discussion of this, using the Kansas Experiment as an example.

And then we have poor states and cities with sluggish economies that simply don’t have enough money to run good school systems. I think of the little boy in Barbara Kingsolver’s novel “Flight Behavior,” who learns English from the football coach because the school can’t afford both and who buys an outdated set of encyclopedia volumes for a buck just so he can learn something.

We have all read about inner city schools that lack enough textbooks for the whole class. Almost any teacher regardless of location can testify that he/she spends their own money on needed supplies and classroom materials.

Whatever the reason, I think that far too many Americans either never learned to speak proper English or prefer not to do so. For those of us who paid attention in class, who were English majors, who write for a living, who NOTICE when the people around us speak or write incorrectly, this is a sad and annoying state of affairs. 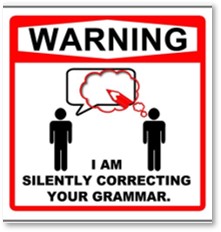 We are the people who whisper the correct word or phrase under our breath, who surreptitiously correct misspellings on signs and menus, who write letters to the editor or comment on articles that demonstrate bad usage. We are also the people who form mental judgments about you based on your English usage.

If you don’t care about the language of your own country, we are your worst nightmare.

You know that we know. And you don’t like it. It makes you uncomfortable. Good. Pay attention and perhaps you will learn to speak correct English, too.