On Thursday, Universal Hub announced that Tufts was closing its pediatric unit, the Floating Hospital, and would refer sick young patients to Children’s Hospital. My first comment was, “What about the bear? 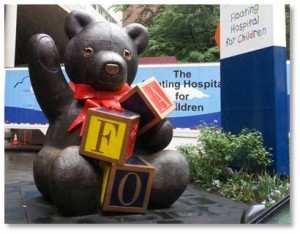 The Teddy Bear outside the Floating Hospital

The huge bronze Teddy Bear had sat outside the Floating Hospital since 2004 when FAO Schwartz declared bankruptcy and donated their 3-ton bear to the City of Boston. The city moved him from the former FAO Schwartz store on Boylston Street to outside the Floating Hospital for Children on Washington Street. He has been welcoming sick kids with his waving paw ever since.

Universal Hub’s Adam Gaffin immediately emailed Tufts and they responded that the Teddy Bear by Sculptor Robert Shure was staying put. Phew! I was afraid he was about to rejoin the ranks of Boston’s wandering statues.

Despite their significant weight and size, several of Boston’s peripatetic statues have moved locations, sometimes more than once. Also, this being Boston, folks gave some of them nicknames. Here are the details on the ones I know of and have written about: 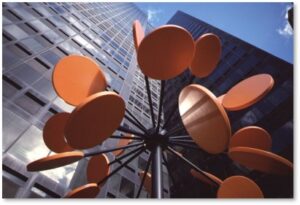 This dipping, spinning, whirling abstract sculpture, was a favorite of Financial District employees and commuters. They loved to watch it while they ate lunch or waited for the bus. New owners of 100 moved it because they clearly didn’t know they had a popular landmark.

“Helion” landed in Roxbury’s Madison Park Village. There, people presumably watch its hypnotic movement and wonder if it can survive a high wind. It can.

This line of five emaciated men holding lances and mounted on equally scrawny horses once plodded wearily along the Charles Street side of Boston Common toward Beacon Street. It was moved first into storage and then to its first location in the Seaport. The Partisans currently resides at the intersection of Congress and D Streets, which is a much better fit.

A tribute to the Scottish poet Robert Burns and his collie, Luath, this statue, like the partisans, has moved twice. It originally stood on a grassy slope in the Back Bay Fens overlooking the Muddy River. In the seventies, the poet and his dog were quietly moved to Winthrop Square in the Financial District. They remained there until 2019, when they returned to their original spot near the Westland Avenue Entrance to the Fens. 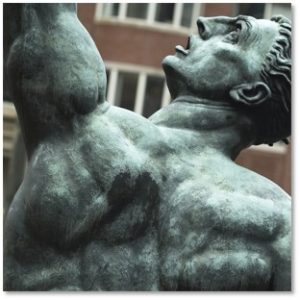 A giant male nude rising as if taking flight tends to catch the eye in Boston and this 27-foot statue was no exception. Mounted on a pillar at the Boylston Street side of the Prudential Center, he reached up to the stars, the heavens, or the Top of the Hub, depending on your perspective. The statue remained in place until 2014, when the plaza he occupied was filled in with more buildings. He now resides in Allston’s Smith Playground.

The scrap metal bird that once stood in the little garden along the Federal Reserve Bank’s Atlantic Avenue side. The poor ostrich, made from scrap metal, was damaged when someone sat on it. Sculptor Madeleine Lord repaired her work. Then it was moved to an inner courtyard to protect it. 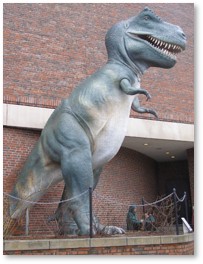 There. That’s a total of six wandering statues that, over time, have migrated from one Boston location to another. You would think that their size and weight would argue for keeping them in one place but, hey, if today’s equipment can drop a Tyrannosaurus Rex outside the Science Museum, they can do anything.

Will there be more? In a city that’s growing and changing as quickly and dynamically as Boston, I believe there will. New development almost ensures that statues deemed inconvenient, in the way, out of place, or irrelevant will disappear from one place and, with luck, pop up in another.

We can, at least for the moment, however, feel good that the Floating Hospital’s big bronze teddy bear is staying put. 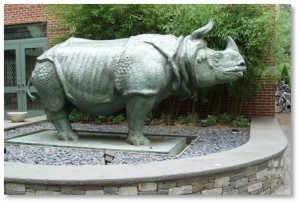 If you like animal statues, try these posts on Boston’s Bronze Menagerie of critters you’ll find around the city. They include animals large and small, wild and domestic, walking and swimming, fierce and friendly.  Bet you didn’t know there were so many.