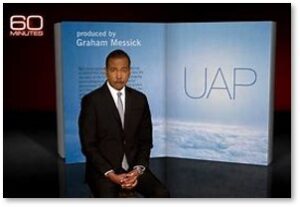 It appears that finally, after 74 years, the UFO cat is out of the bag. And the proof could arrive next month.

By that, I mean that the mainstream media are finally, finally paying attention to the issue of Unidentified Aerial Phenomena (the Pentagon term) or Unidentified Flying Objects (the popular term). That attention came to the fore on a segment of Sunday night’s 60 Minutes. After all, if 60 Minutes is talking about something, it gets attention.

In my opinion, this phenomenon has deserved more attention for a long time.

Reports of UFOs in the sky have come from Navy Air and Air Force Pilots, and commercial pilots. People of all kinds, including a Senate majority leader, a governor, and thousands of ordinary folks have reported seeing UFOs.

Those of us who have paid attention to the reports, have also read stories of the “men in black” who show up in cars or helicopters to confiscate cameras, tape recorders, home movies, and physical evidence from citizens.

The federal government has consistently denied that these phenomena exist. The official approach to UFO reports has been a long-running, orchestrated campaign to make them an untouchable subject. I wrote about that in my blog post on “The Power of Cell Phones to Change Minds.”

Coming Late to the UFO Party

Even now, you hear that carefully cultivated incredulity in the voices of interviewers who are coming late to the party. In the 60 Minutes segment, Bill Whitaker feels compelled to comment that, “it sounds nutty, wacky.” Other interviewers can barely wipe the smirks off their faces. Their cynical grins say, “I don’t really believe this sh*t but they made me do the interview.”

Why the UFO Coverup?

With all the attention the UAPs are getting these days, however, no one is asking the one question that really intrigues me:

Why has the US government put so much effort, time, and money into suppressing reports of UFOs, “explaining” them away, and turning the whole issue into a career-ending live wire?

Even the most credible of people reporting encounters say that their accounts have been ignored, downplayed, or ridiculed. (Watch the 60 Minutes segment) Funny thing, the government doesn’t bother to do that with Sasquatch or other cryptids and urban legends. If UFOs are really “wacky,” why discredit just this one?

I can think of several possible explanations:

You can probably think of more. Sarah Scoles wrote a tongue-in-cheek story in Slate about this subject called, “Why Would the Government Lie About Aliens?”

Is the Coverup Working?

This disinformation campaign hasn’t worked very well, though. A 2019 Gallup poll revealed 68 percent of people think the government has more information about UFOs than it’s admitting to. Among the respondents, 33 percent said that they believe UFOs were built by aliens from outer space. 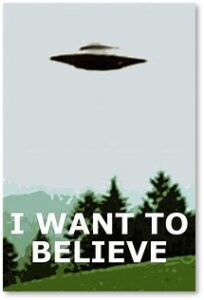 Note the word “believe.” Belief is the purview of religion, not of science. What difference does it make if I, or anyone, believes in UFOs? If they don’t exist, all belief is irrelevant; if they do exist, any denial is dangerous.

We need to get the facts and find out for sure.

By all accounts, the UFO phenomenon requires a non-holds-barred scientific inquiry. In fact, we should have been doing this for decades. Given the size of the Defense Department’s budget, why aren’t they interested in getting answers? After all, these flying objects have buzzed our military aircraft, invaded restricted air space, and even gotten in the way of planes landing at military bases.

One would think the Defense Department would be more eager than anyone to find out what’s going on, if only to protect their bases and personnel. Instead, they bury accounts from their own pilots and make them afraid to even report what they have seen. 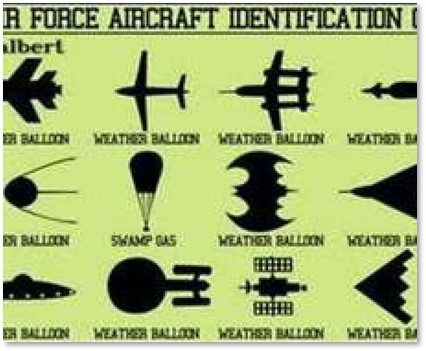 Over the years since the Roswell Incident—the beginning of the organized UFO coverup— the government has set up one task force after another, only to discredit the reports the groups analyzed. Often those task forces used ludicrous explanations: weather balloons, temperature inversions, swamp gas, etc. to sweep the reports under the carpet.

I hope to get some clarity when the Pentagon issues its report, demanded by the Senate, in June. The military can still throw a spanner into the works, though. The Senate mandate says they don’t have to report classified information. That means the Defense Department can classify significant portions, or even all of the report, and keep them secret. I don’t think that would fix their problem, though. We have gone beyond that point.

Suppressing accounts no longer works in a world where people walk around with video cameras in their pockets and an Internet that allows for instantaneous dissemination of images. Authorities can no longer silence people, confiscate cameras, and block what they have recorded.

The truth is out there but it’s also increasingly provable down here. We may find the truth about UFOs — or at least part of it — in June.

2 thoughts on “UFOs: The Truth is Coming”