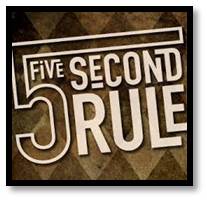 I have spoken these words.  Out loud.  In the presence of others.

For the few reading this that may not be in the know, this rule applies to food dropped on the floor that, if picked up within five seconds or less, can be safely eaten.  There are those who believe this to be true, but most people invoke the rule as justification for eating fallen food, especially if they happen to be in the presence of witnesses.  Like me.

Research data supports this. 87% of people surveyed said they would eat food that had fallen on the floor, and 81% invoked the five-second rule.  55% percent of these people are women.  Women are the higher percentage because we are genetically programmed to be thrifty and we have super powers; which means we have better immune systems.

How many of you picked up the pacifier, licked it and put it back in the baby’s mouth?  I know you’re out there.  Moms also eat the unfinished mac and cheese; the last bite of egg on the plate and claim the broken pieces of cookie.  It’s who we are.

Alas, the five second rule is a lie and I’m just kidding…sort of.  This particular piece of food lore has received a lot of scientific scrutiny and extensive research.  Bacteria can jump on your food in a nano- second.  Given a few nanos longer, it will move right in and do some serious damage.

The first person to disprove this idea was a high school student named Jillian Clarke during a 2003 internship at the University of Illinois.  She’s the one who outed that 55% up there.  Jillian discovered that bacteria could find dropped food in less than five seconds.  She also noted women were more likely to eat fallen food than men, and sweet things were the favorite rescue item.  In my case it was a bag of M&M’s that flew open after several failed attempts, scattering them at my feet.  Not my finest hour, but hey, they were peanut M&Ms.

Jillian’s research was the impetus for continued study by scientists who discovered salmonella could survive on a variety of surfaces for up to four weeks and thrived particularly well on carpet. This finding is a bit contradictory to another study that focused on bacteria stickiness, elevating carpet to a higher status because it’s harder for the bad guys to stick to the surface.  Once they do stick; the high risk rate applies.

Scientists also confirmed—wait for it—the longer the food had contact with the floor the higher the transfer of germs.  Food left on the floor for just five seconds can pick up between 150 and 8,000 bacteria. Left there for a full minute, bacteria increases as much as 10 times.  Combine this with the fact that it takes as little as 10 salmonella bacteria to cause an infection.  You can trust me on this; the end result is not a pretty one.   For the record, it wasn’t the M&M’s; it was a trip to Morocco that involved a hand railing.

Microbiologist Charles Gerba, the “germ guru” of the University of Arizona, has conducted all kinds of test on the five second rule.  Be afraid.

Dr. Gerba explored the pH of saliva and stomach acids and their ability to defend contaminated food once it enters your system.  Dr. Gerba says “Many viruses survive the low pH—in fact, they like it. Viruses like hepatitis A and norovirus survive well at low pH. So do bacteria like salmonella.  Bacteria that infect the intestine survive the low pH long enough to actually get to the intestine.”  Once it’s in there it’s a full-blown party where bad things happen. 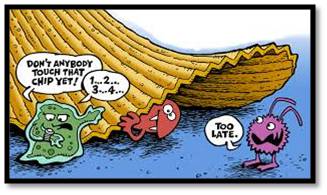 But wait—there’s more!  When you drop food, it’s important to consider where it lands.  Location, location, location.  It’s the determining factor in real estate and the five-second rule.  Location plays a key role in the transference of floor germs.  Researchers dropped food on three different types of floors—carpet, a laminated surface, and a tiled surface, then monitored the transfer of E. coli and Staphylococcus aureus.

Bacteria were least likely to stick to food dropped on carpet; and more likely to adhere to food hitting laminated and tiled surfaces.  That gives some boundaries to the five-second rule, but does it make it legit?  Yes and No.

The Discovery Channel series MythBusters  featured an episode that analyzed this theory. They experimented with plates left on a contaminated surface between two and six seconds and “busted” the five-second rule. There was no real difference in the number of bacteria collected from two-second exposure compared to six-second exposure. They determined that any item that spends a millisecond on the floor attracts bacteria. How much depends on the food’s moisture, surface geometry and floor condition, not the amount of time.  Since I believe everything MythBusters tell me, I’m going with this one.

In case this is confusing, here’s another fact to help put the five-second rule into perspective.  Your cell phone carries 25,000 germs per square inch, while toilet seats (the cleanest place in the house according to MythBusters) hold only 344 bacteria in the same space.  We all know how much time we spend with our mobiles near our mouths, so we can pause here to absorb the full weight of this information. My M&M’s got nothing compared to those phones. I feel better already.

I think most of this research, while valid, is also self-evident.  We live in a dirty world.  We have immune systems to combat the germs and bacteria that live among us. Some surfaces transfer more bacteria than others and increased exposure results in increased transfer and risk of infection.  Let’s all remember to wash our hands.

I did not need a scientific study to figure this out however a recent one from Aston University in England refutes this data and claims food doesn’t actually pick up that many bacteria in five seconds.  I offer this profound quote from their research:  “Our study showed that a surprisingly large majority of people are happy to consume dropped food.”  There you have it.

Here’s what I think you need to know about the five second rule:

Still confused?  Here’s a handy chart to help you figure it out. 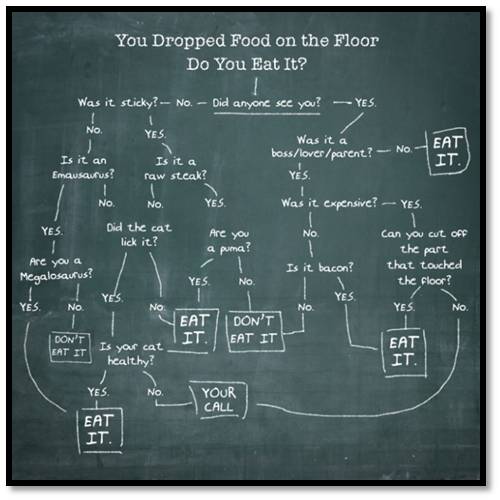 In case you’re wondering where I stand on all of this; I live in a house with two three-second dogs.  There is no five-second rule.

AK Note: Bacteria is plural, bacterium is singular. Didn’t know that?  Don’t feel bad; most people are unaware of this fact–even reporters, writers and editors who use language for a living. They probably eat dropped food, too.