Once again, a reader has come to me with a question about whether a Boston street name is connected to an ancestor. It feels odd to have become a resource for information on Boston streets, but Boston By Foot docents are up to a challenge!

Michael Bosworth found me via a reference from the New England Historic Genealogical Society / American Ancestors with a question about whether Bosworth Street is related to his family, who came to Massachusetts in 1634. 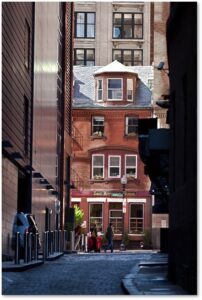 I started some research and discovered a circuitous route to the answer. That’s partly because Bosworth Street is a very short street. Also, of course, it was originally named something else. Or not. Reference sources conflict.

The first mention of a Bosworth comes from the “Book of Possessions,” which tells us that Zacchaeus Bosworth owned a house and garden at the south corner of Tremont and School Streets. He sold part of his land to William Pollard in 1663 and the house to William Clarke in 1704.

The 1722 Bonner map of Boston seems to show this as a fairly open tract of land, although my eyes, even with a magnifier, could not tell how much of it belonged to Mr. Bosworth. (If you have better eyes, or a better magnifier, than I please let me know.) 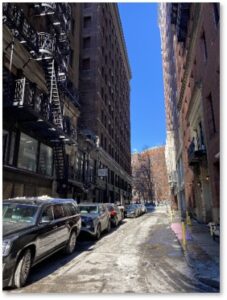 Zacchaeus Bosworth was also the first owner of the land on Beacon Hill that Thomas Hancock bought in 1737 on which to build the historic Hancock House.

NOTE: The photo above looks down Bosworth Street from Tremont Street. The Marliave Restaurant is at the end on the right. Opposite it on the left is the blank wall of 45 Province Street, a luxury residential building. The brick building facing us is located on Province Street.

The photo on the left looks up Bosworth Street toward Tremont Street. The Province House Steps below show the Marliave on the left. 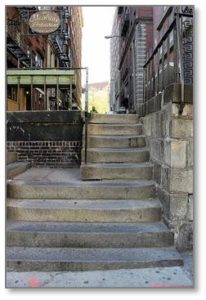 Bosworth Street traverses one short block from Tremont Street on the north to a dead end at the Province House steps that lead down to Province Street. Those steps give us a clue because they once led from the Province House—the former governor’s mansion on what is now Washington Street—up to its back garden. Province Street used to be a path through the gardens behind the mansion.

Some sources say that when the Province House was destroyed by fire in 1864, Rawson’s Lane was created. Later it became known as Bosworth Street. Others record that William Aspinwall owned a large estate next to Mr. Bosworth, which extended to Washington Street. 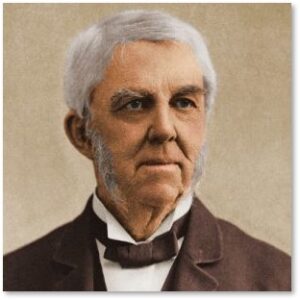 While I could not find a direct connection between Zacchaeus Bosworth, who lived one block away, to the street that bears his name, it seems likely. This was, after all, probably his land at a time when Boston was just a small town. Perhaps today’s Bosworth Street runs through what used to be his garden.

Bosworth Street had one notable resident. Dr. Oliver Wendell Holmes moved to a house at the northeast corner of Bosworth Street after his marriage in 1840 and lived there for 18 years. All his children were born here as he rose from Professor of Anatomy to Dean of the Harvard Medical School.

Currently, it houses the Marliave Restaurant at #10 Bosworth Street, and the Barracuda Tavern at #15.

When I give tours and people ask if one historical person was related to another person of the same surname, I tell them then answer is almost always yes. Boston was smaller and more compact back then. Men bought land from one another. Families intermarried. Last names became first names. While all this can be very confusing, it means that Occam’s Razor applies.

If you think that Bosworth Street was named after your ancestor, who owned land in proximity to that street, it probably was. Now all Michael has to do is trace his line back to Zacchaeus Bosworth to close the deal.