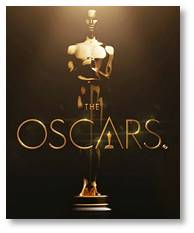 Yesterday the nominations were announced for this year’s Academy Awards. These honors combine with all the New Year’s lists of 10 Best Movies of 2014 to create a mini-flurry of interest in movies that will last until the 87th annual Academy Awards are broadcast on February 22. Articles will appear both pro and con certain movies, actors, directors, etc. Some independent movies will get distribution and actually show up at the multiplex for the first time. There will be analyses of many aspects of movie making from script to post-production and arguments pro and con. What there won’t be are surprises. The Oscars aren’t good at surprises: they are pretty predictable in every way–mostly not for the better.

Here’s what to know about the Academy Awards in general: 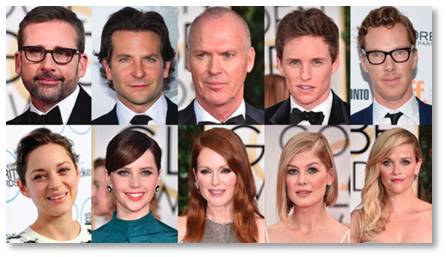 In the Oscar nominations 2015, the nominees for Best Picture in alphabetical order are:

What don’t we see on this list? Aside from people of color, we don’t see stories about women, of course. Here are three movies that would have qualified for Best Picture honors:

And it’s not like there wasn’t room. Ten nominations are allowed for Best Picture and only eight slots were used. Not a single female director, writer, composer, cinematographer was nominated and all Best Actor nominees are white.

Why is there so little diversity in the Academy Awards?  (And, one might add, in the movies themselves.) Why are women honored for portraying wives and prostitutes, drug addicts and alcoholics, sociopaths and mental patients but not real women who are trying to solve real problems—or make themselves better people? Why are “women’s stories” underrepresented in the multiplex as well as the Oscars? Because they are not considered important, significant, uplifting or even noteworthy by the men who run Hollywood.

If you need proof, just look at the Academy’s demographics. In “One Tweet Perfectly Sums Up Everything Wrong With the Oscar Nominations” for Identities.Mic, Marcie Bianco shows the demographic skew of the Old White Men who run Hollywood. The people who vote for the awards are 94 percent white, 77 percent male, and have a median age of 66. The statistics go back to a 2012 Los Angeles Times survey but I don’t think that much has changed in two years except that some of the old dudes have left the building for good. 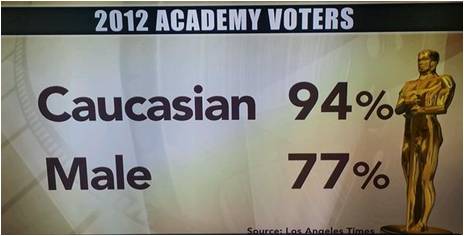 Social media has taken notice. On Twitter’s, #OscarsSoWhite hashtag @RichardHine points out that even the 1936 Berlin Olympics had more diversity, and that was the one held in Hitler’s Berlin. Ouch. @JimmyFallon notes that, “This year’s Oscar nominees are so white, they just became the frontrunner for the 2016 Republican nomination.” @TheDailyEdge says they’re so white “they might as well be broadcast on Fox News.” The tweets on #OscarsSoMale aren’t as good. I’ll have to think of something to add.

Things have to change, and not only because this lack of diversity is unfair, unjust, or unrealistic. It’s hurting Hollywood where it lives—in its wallet. Last year was not a good year for the movie industry with lower ticket sales and box office revenues down 5.3 percent, the worst results since 2011. Maybe this is how customers say we’re fed up with movies about men, men with guns, men at strip clubs, men in uniform, men who drink or take drugs, men in spandex suits, men who cheat on their wives, and men with identity crises. Let’s have some diversity in stories, perspectives, life experiences, and values. Let’s stretch people’s imaginations instead of pandering to the preferences of one demographic group.