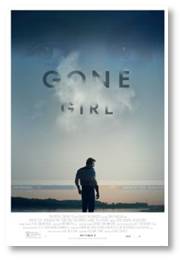 I have been struggling with the best way to write about Gone Girl that does not give away the plot for those who have not read the book. Going into the movie, I was also puzzled about how David Fincher would translate the book’s structure into a film format and still have the plot make sense. Suffice it to say that Mr. Fincher succeeds with the transition and comes out with a carefully paced, well-structured movie that pulls you into the plot and engages your attention throughout.

I must admit, though, that I enjoyed it more than my husband did—and he had not read the book.  He sort of endured the first half but liked the second half much better.  Whether that’s the case for other viewers who hadn’t read the book—or even other male viewers—I don’t know.  You tell me. 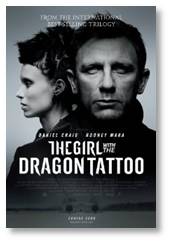 The problem with seeing the film version of a novel is, of course, that there are no surprises. You know exactly what’s going to happen and the pleasure lies in seeing how well the movie is cast and written and how well the director and the actors deliver on the book’s promise. Knowing how it will all end inevitably diminishes the experience. That’s one reason I did not read The Girl with the Dragon Tattoo before it came out and I think I liked the movie much better than did my husband, who had.  I was engrossed with the intricacies of plot and character for GwtDT in a way that was impossible for me in Gone Girl.

But @GoneGirlMovie is very well written by Gillian Flynn, the book’s author, and directed by David Fincher. Ben Affleck and Rosamund Pike give excellent performances as Nick and Amy Dunne, supported by a good solid cast. Tyler Perry is particularly good in his role as a defense attorney.

Gone Girl movie was hailed by many critics as the most-anticipated movie of the fall season for all those reasons. Also because it is a film made by and for adults—a rarity in an ocean of releases largely comprised of screwball comedies, animated fairy tales, young adult and teen angst dramas, special-effects blowouts, gory horror flicks, and superhero movies.  Or combinations of these. This puts it in the same category as Captain Phillips, Moneyball and The Social Network. Nick Dunne’s behavior is certainly screwball enough after his wife’s disappearance (I’m not giving anything away here. It happens five minutes into the movie.) And there is a pretty gory scene toward the end. But I guess we can’t have everything.

Delivering on that promise, Gone Girl brought in $38 million in revenue  for its opening week to take the top box-office spot, squeezing out Annabelle, the latest schlock horror film. With a production budget estimated at $61 to $65 million, it’s likely to be a very profitable investment for 20th Century Fox and New Regency Productions. In the adult drama category, though, it’s about to get some competition from The Judge with Robert Downey Jr. and Robert Duvall and even Fury, Brad Pitt’s WWII drama that is opening next week. The best thing that could happen would be for audiences to show that adult dramas can make money—and thus encourage the studios to make more than one of them a year.

In fact, if you look at the numbers and include a few earlier adult dramas, the numbers (and ratings) look pretty good:

It’s not enough to make a low-budget movie for grown ups, though. You also have to make it a good movie. The Rotten Tomatoes scores in the chart show that each of these films got very high ratings from the critics. Audience scores were at least as good and sometimes better. My father used to say that baseball players didn’t always need to swing for the fences. “You can get a run with two singles and a sacrifice fly,” was his rule. Hollywood might do well to take his advice to heart and hit more singles.  Sometimes, like Captain Phillips and, I hope, Gone Girl, they turn into home runs.