From my days at Northeastern University, I remember this building at 52 Hemenway Street as a tennis club. I would walk past it and think how it looked as if it had been picked up from a European city and dropped in Boston’s Fenway area. There was a good reason for this, although I didn’t know it at the time.

Also, I didn’t know that tennis was only its second incarnation, one that, along with its first purpose, has vanished into the city’s history. It started with horses. 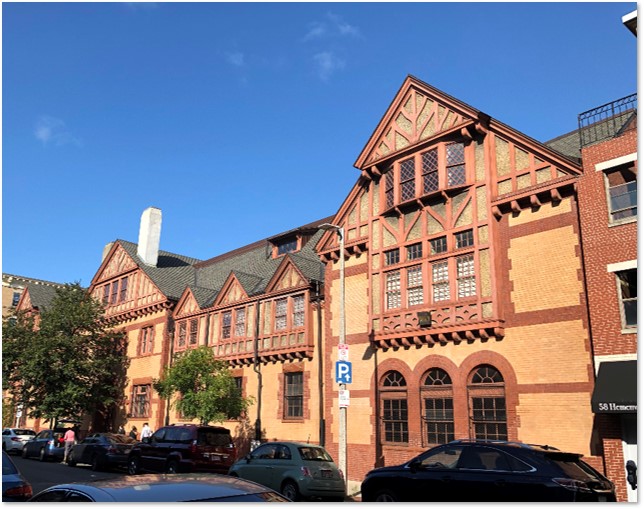 A group of prominent Bostonians founded the New Riding Club in 1891 as a private riding stable adjacent to the Back Bay Fens with its convenient riding paths. You have probably walked on these paths and carriage ways going to and from a game at Fenway Park without ever thinking of horses, much less seeing one.

The club provided for the needs of its socially prominent equestrian members and their mounts. It offered facilities for stabling, feeding, exercising, shoeing, and grooming the horses, along with veterinary care. Members could take advantage of a riding ring, club rooms and changing rooms. The stone-fronted Neverslip Horse Shoe Co. stood conveniently adjacent to The New Riding Club on Caledonia Street (now Norway Street) during the 1890s.

The New Riding Club was one of three stables located near the Fens but is the only one still extant. These clubs must have been a boon to the elite and prominent families living in the Back Bay’s new row houses and mansions. Deed restrictions in what was then called the New Land prevented owners, with a few exceptions, from stabling horses in the public alleys behind their homes. The Back Bay Fens, newly created by Frederick Law Olmsted as part of the Emerald Necklace, gave them a place to ride and the new clubs offered stable facilities for their fine riding horses. 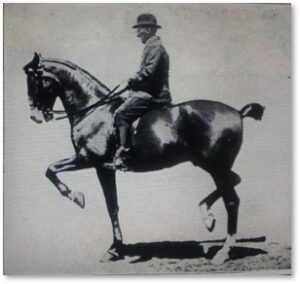 The club’s riding instructor, Henri Lucien de Bussigny was both famous and socially important. He came to the United States frin 1872.

A former French cavalry officer, M. de Bussigny trained at the École Spéciale Militaire de Saint-Cyr, the foremost French military academy. Napoleon Bonaparte founded the academy in Fontainebleau in 1802  and it is often referred to simply as Saint-Cyr. M.De bussigny also attended the even more rigorous military Cavalry School at Saumur with its elaborate exhibitions of dressage.

M. de Bussigny was a “first-rate horseman of the French classical style.” He authored several books on equitation. 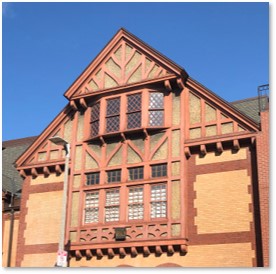 Boston Architect Willard T. Sears designed the building itself in the Tudor Revival Style after the commission was originally given to his firm of Cummings and Sears. It went up on a site previously occupied by a brick industrial building owned by the Boston Water Power Company. At that time, the area around Hemenway Street (then Parker Street) was part of the Gravelly Point cross dam/mill complex created by Uriah Cotting, an early entrepreneur.

Records say the building was completed in 1892 but it may still have been under construction three years later. Deed restrictions specified that no horse entrance be located on Parker Street (Hemenway Street). In 1895, the Riding Club’s members included Henry M. Whitney, a Robert Treat Paine (although not the signer of the Declaration of Independence), A. Lawrence Rotch, and Thomas Bailey Aldrich.

A Golden Building Among the Bricks

Mr. Sears created a structure unlike anything else in the city and It has been called one of his finest designs. The New Riding Club building incorporates many Tudor Revival characteristics, including:

The three-story New Riding Club is made of stucco with tan brick on the ground floor and red brick round arches. Faux half-timbering dominates the many upper-floor gables.

On a sunny day, the building has a golden light that stands out from the dark red brick of the row houses and other residential buildings around it. A very large structure, especially for that neighborhood, The New Riding Club wraps around the corner of Hemenway Street onto Norway Street all the way to Stoneholm Street. It occupies almost the entire block.. Members would have had a short ride into the Back Bay Fens.

From Tennis to Condos 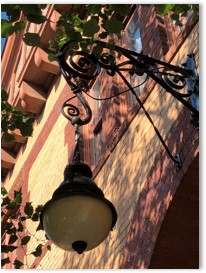 One of several lanterns with its wrought-iron bracket

In 1985, developers renovated the former stables and tennis club into residences, an adaptive re-use of an historic building.

You might think the New Riding Club building is unusual and wander around it, looking for some indication of what it used to be but you will be disappointed. No plaque marks its history as the New Riding Club and Mr. Sears did not incorporate the club’s name into the building’s façade, as was often done in the nineteenth century.

The New Riding Club was added to the National Register of Historic Places in 1987.