Last week I babysat for my two grand-daughters while Mom went to Book Group and Dad was traveling on business. I got there early so I planned on cooking dinner. I love cooking and I have been teaching my granddaughters to cook, a somewhat random process that involves whatever I’m making that day. Over time, however, I have learned that the kids’ enthusiasm for the process of cooking is completely decoupled from their willingness to eat the results. Making hard-boiled eggs for breakfast, for example, was a great cooking lesson and one they engaged in quite happily. Eating the eggs, however, (Yolks, Ewwww!), was not so successful.

So I thought carefully about what to make for dinner. They love my meatloaf but it’s summer and just too hot to turn an oven on for an hour. In fact, I wasn’t up for cooking anything too complicated. In the end, I reverted to my alter ego of the Leftover Queen. We would have rice pilaf with steak. 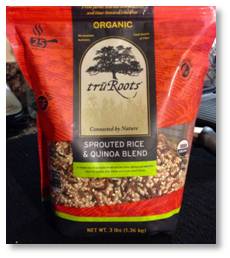 Before leaving home I packed several things In a cooler :

I would have packed more but Mom and Dad have joined a Community Supported Agriculture (CSA) farm share and I knew they were awash in fresh fruit and vegetables. Before we picked up the girls from camp I prepped the meal by washing a container of blueberries and dicing:

When we came home I heated oil in a wok and M, the older girl, dumped in the chopped veggies and stirred them together. I sliced the steak and then cut the slices into bite-sized pieces. When the veggies were ready, M added the containers of leftover rice and stirred the mixture together. Then we pumped up the rice pilaf with some salt and pepper and other spices, taking care not to overdo because both the steak and the rice mixture had already been seasoned.

M peeled and cut up a cucumber. She’s six and just learning to use a sharp knife, which she does carefully, so the pieces were a tad irregular but tasted good just the same. I cut an heirloom tomato into quarters.

At the last minute I added the cut-up steak to the wok and stirred it in so it would get warm but not well-done.

When the rice pilaf was done, it did not look pretty but it sure smelled good. I put a spoonful on M’s plate. Despite having cooked the whole meal she looked at it doubtfully and the chard earned her particular suspicion. “I don’t like the green things,” she said. I replied that she should just take a bite that didn’t include the green things and see if she liked it. M complied and her face lit up. “It’s good!” she said. Then she added to her sister, “T, it’s good.”

T, however, is a fairy child who lives on sunlight and fresh air so she looked askance at the tiny amount on her plate and disdained to take even one bite. M, meanwhile, cleaned up her portion, green things and all. When I was done eating, we made dessert by slicing the biscuits, piling on blueberries and topping them with a dollop of whipped cream. It wasn’t exactly blueberry shortcake but it had less sugar and that meant an easier bedtime. 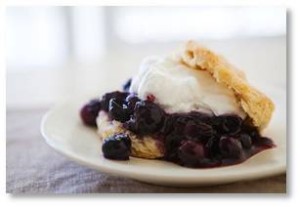 Blueberry shortcake — not mine

The whipped cream met T’s criteria for acceptable fairy food and she was interested in dessert but not eligible because she had not eaten any dinner. So M helped her, literally putting the food in her mouth until T had cleaned up her plate. Even then, she only ate the cream with the few blueberries mixed in but barely nibbled the biscuit. Sigh.

She’ll develop an appetite eventually but until then having a solar-powered grandchild can be a trial. Oh, and Mom had two plates of dinner before heading off to Book Group so I know the Leftover Queen’s rice pilaf with steak was a success.

Bedtime was easy. M was exhausted from a day at camp and she conked out halfway through the second book. T held out into the third book, but finally succumbed. Or so I thought. When she toddled downstairs 10 minutes later I put her back and told her that if she came down again she would encounter Mean Grandma—and no one wanted that to happen. I had the rest of the evening to myself.