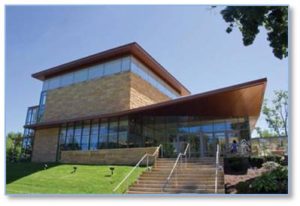 New England has lots of museums of all types.  You name it and there’s a museum for it: history, natural history, farming, art, science, children’s, medicine, house, curiosities. So I’m never surprised to find one that I had never heard of before. In this case

Willard Spiegelman, author of “In Connecticut, Discovering American Art’s First Home,” tells us that this small museum in a hard-to-find town was the first institution to dedicate itself to collecting American art. Who knew?

A Weekend Trip to the New Britain Museum

Not us. But once we knew we scheduled a weekend trip to central Connecticut to take in the collection. Wow, what a surprise! First, the New Britain Museum of American Art is beautiful—a contemporary building in glass and stone designed by Ann Beha Artichtects and located alongside sunny Walnut Hill Park, which was designed by Frederick Law Olmsted. Contemporary sculpture is scattered on the slope of the park as if it escaped from the museum to enjoy the outdoors. 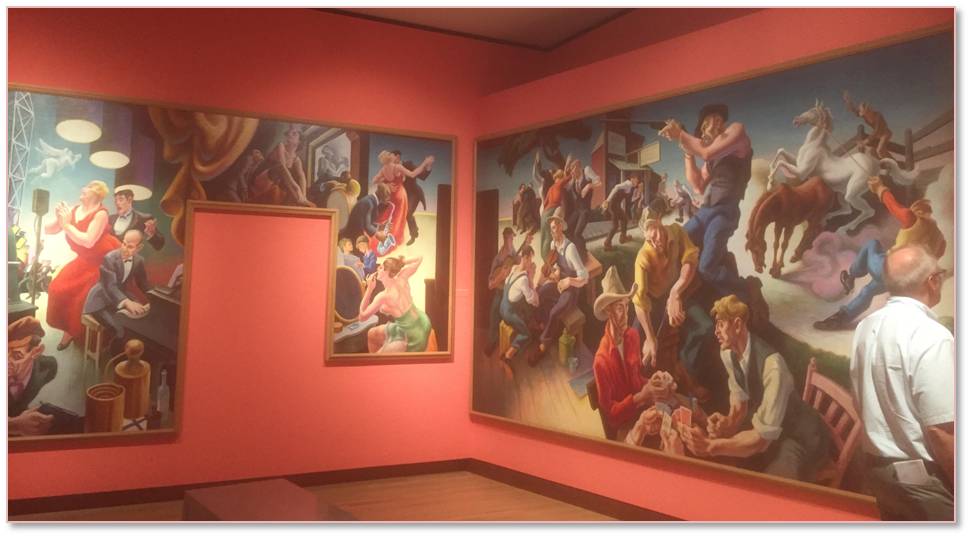 Half of Thomas Hart Benton’s murals

Full disclosure: I love American art because the subject matter is so much more diverse than European art. It’s not that I don’t appreciate religious paintings—two of them got me through a lot of dull sermons at St. Louis de France—but one can get burned out after 10 or more crucifixions, madonnas, and ascensions. Enough, already.

American art focuses more on ordinary people, the countryside, street scenes, natural wonders, and other “ordinary” subjects.  These works tend to be more fluid in composition, brighter in color and expressive in emotion. Most of the commissioned work involves portraits, while the rest seem done for the love of painting and the subject matter. One feels that love when standing in front of works from the Hudson River School to the Ashcan School.

Once inside this bright, sunny structure, you walk right past a security guard who, oddly, doesn’t move or talk and into the galleries. These are arranged in chronological order starting with the eighteenth century so you move seamlessly from the Colonial period to great works of the twentieth century and beyond. 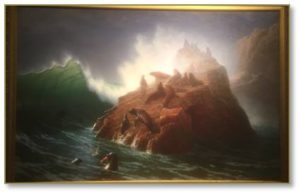 And what works they are! The names of artists alone will give you some idea of the scope. I can’t print them all here because there are simply too many but this list on the museum’s website encompasses the range. Even then, however the collection holds surprises in nearly every room. Familiar with Albert Bierstadt’s enormous landscapes, I had never seen anything like Seal Rock, with its luminous wave and frolicking pinnipeds.

The room full of Thomas Hart Benton’s murals on the “Arts of Life in America” that the NBMAA rescued when the Whitney Museum in Manhattan sold them for $500 are astonishing in their color, movement, and historical scope. (Not to mention that I never knew Jackson Pollock was his assistant and that his image is depicted in the “Arts of the West” panel.)

A Collection of Illustrations

Once we had completed the first floor, I thought we were done. But no. Up the stairs we found “Masterpieces of the Sanford B.D. Low Illustration Collection,” an exhibit that runs only until October 2. We were lucky to catch it. These works are part of the museum’s original collection but are not always on display. Also, no photography was allowed in this exhibit.

I love illustration. I have never understood why the art world disdains it because of its commercial roots. Yes, one must work hard to produce a painting that will be accepted by the Academy and decorate a home, church, or public building. Illustration must work harder than that, however. Illustration draws you into a story, lures you into buying a book, adds emotion to a dry magazine article, and puts magic between the lines of a novel. 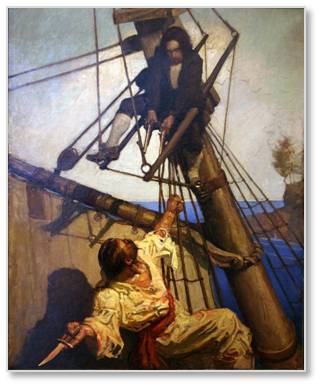 Illustration shows you places you have never visited—and that may not even exist. It brings fictional characters to life and shows you what that life was like in different times and places. Whether the story takes place in ancient Egypt or the craters of Mars, illustration will take you there. Given my choice, I’ll take a Howard Pyle illustration over a Picasso any day.

So, I really enjoyed this exhibit of works in different media that were produced for commercial purposes by some of the great names of illustration: Howard Pyle, N.C. Wyeth, Norman Rockwell, Stephan Dohanos, and Maxfield Parrish among many others.

If you remember the fifties and sixties, you have seen some of these works. Many in the collection are framed so that the magazine, book cover, or complete book appears below the illustration. These include great works of literature like “Treasure Island” and “Tarzan of the Apes” to pulp magazines like The Shadow, Weird Tales and the Saturday Evening Post. What a treat to see the original juxtaposed with the commercial reproduction. (The original is always better.)

The New Britain Museum of American Art’s collection is so large—over 10,000 pieces—that, like much bigger museums, not everything is exhibited at once. That movable feast of art work makes for multiple visits with new surprises every time. If you like American art and/or illustration, put this museum on your list of places to visit. I have added it to my life list of art museums.