Yesterday’s post on clam cakes along the South Coast and Macray’s clam shack on Route 6 proved to be more popular than I could have imagined. I posted it on the Grew Up in Somerset Facebook group and well over 125 people have viewed it. Readers also Shared, Liked, and Commented on it. I asked for pictures: both Ken Mello and Steven Gorenbergh provided photos from different time periods. Steve also sent  me a link to an article by David Leite in the New York Times’s Dining & Wine section called “In a ’64 T-Bird, Chasing a Date with a Clam” that mentions Macray’s prominently. Thanks, guys!

The New York Times—who’d a thunk it?  Just FYI, here’s what @NYT has to say about everyone’s favorite clam shack:

“The memory: lightly fried clams with big, juicy bellies, like the kind I munched on nearly every summer weekend growing up in Swansea, Mass. The car, owned by my friend Bob Pidkameny: a nod to my godfather, a local celebrity and stock car driver, who would pile my two cousins and me into whatever sleek beauty he was tinkering with and take us to Macray’s in Westport, Mass. There we sat — three lard slicks — digging into red-and-white cardboard boxes, while screams from the riders on the Comet, the wooden roller coaster at a nearby amusement park, floated across the highway.”

Fried clams are to New England what barbecue is to the South. Like barbecue, the best clams come from small roadside shacks run in pragmatic mom-and-pop style. Flinty Northerners, like their porcine-loving counterparts, can be fanatically loyal to their favorite spots. To eat at any place but Macray’s was considered familial treason when I was growing up — it was Macray’s or nothing, until it was shuttered and we were set adrift.”

That roller coaster was The Comet in the late, lamented Lincoln Park, which I wrote about in a previous post: The Lessons I Learned at Lincoln Park.  The park closed its gate in 1997 and Macray’s followed five years later. I told my family on Mother’s Day that I wanted to celebrate it next year riding roller coasters at Six Flags New England.  My two granddaughters, who are five and three, thought that was a great idea!

The @Facebook conversation is ongoing as folks debate the merits of seafood places that might be worthy replacements for Macray’s.  And don’t forget, there’s Macray’s Seafood II ion Stafford Road n Tiverton RI.  Bruce Burdett in the East Bay Newspapers wrote, “Macray’s Seafood II aims to rekindle clam shack memories.” They don’t have a Twitter handle but their Facebook page is here. Most of the reviews give Macray’s Seafood II four stars. It looks like they just participated in the Great Chowder Cookoff in Newport.  The 2014 winners are here for folks who want to check out a new place to get “chowdah”—except for the West Coast winner from Seattle. 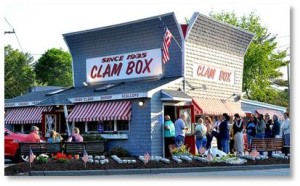 By the way, the grease-stained box is so integral to this brand of road food that The Clam Box of Ipswitch MA was built to look like one. Notice the line stretching out the door. They have great fried clams but no clam cakes. Why?  Why?  Why?

Writing about clam cake culture has been a lot of fun. I may have to revise the post I wrote last year on “Restaurant Impossible: Finding Good Food in Somerset.” Maybe I missed something noteworthy in my long-distance search. If I did, I’m sure the Grew Up in Somerset readers will tell me.

Writing these posts has also made me hungry. I’m well past the age when I can consume large quantities of grease and cholesterol without thinking, however, so I’m trying to resist the pull. The weekend is coming up, though, and Sunday is Father’s Day. Who can resist fried clams on Father’s Day?