I haven’t been writing about movies, mostly because we’re in the spring doldrums when so few movies come out that are worth seeing. Films I thought I really wanted to see, like Jupiter Ascending, got such bad reviews that we passed on it. And some things that we saw, like Kingsman: The Secret Service, were fun but didn’t generate any food for thought.

Two movies about art changed that, however, because they generated discussion and provided lots to think about. They gave us stories about painting from the perspective of an artist on one side of the easel and the family of a subject from the other. I have added a third which was inspired by the real-life tale of a woman whose portrait is something of a mystery. 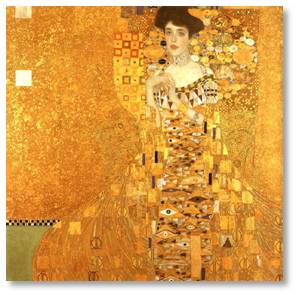 This marvelous movie tells how an octogenarian widow, Maria Altmann (Helen Mirren), took on the Austrian government in an attempt to reclaim a famous work of art that had belonged to her family before it was stolen by the Nazis. Even more personal, the subject of the painting was Mrs. Altmann’s aunt, Adele Bloch-Bauer.

This world-famous picture by Gustav Klimt had been hanging in Vienna’s Belvedere Gallery since the war and was adopted by Austria as an icon of their national identity. You have seen it on everything from address books to refrigerator magnets.

The injustice of the portrait’s theft is matched only by the hypocrisy of a nation that glorified the painting after cooperating with the Third Reich to destroy the subject’s family, friends, and hundreds of thousands of others because they were Jewish. The Austrian nation loved the painting—Adele Bloch-Bauer’s family, not so much.  It would not have done to acknowledge publicly that the subject of their cultural icon was a Jew so they also stripped away Mrs. Bloch-Bauer’s name and called the portrait simply, “Woman in Gold.”

An additional irony is that Mrs. Altmann’s lawyer, Randol Schoenberg (Ryan Reynolds), is the grandson of famed Viennese composer Arnold Schönberg, who went to Berlin but was forced to leave in 1933 because the Nazis treated him as a Jew despite his Catholic upbringing and later conversion to Lutheranism.

The story is told with flashbacks so we see exactly how belongings were stolen from Mrs. Altmann’s family as well as how she escaped from the Nazis across closed borders. The young Maria Altmann is played by the talented Tatiana Maslany of Orphan Black. These scenes are as dramatic and exciting as anything in Argo and remind us of the Von Trapp family escaping across the Alps in The Sound of Music.

The legal battle to reclaim the painting is equally engrossing because of the Austrian government’s continuous opposition to returning it in spite of growing evidence that the painting was never legally theirs.

Klimt actually painted two portraits of Adele (a-DAY-leh) Bloch-Bauer (1881 – 1925) and she may also have been the subject of his painting called “Judith.”  She was a beautiful woman who died before Austrians began collaborating with the Nazis but her portrait lives on among art lovers around the world. This movie does it justice as it does to the efforts of Mrs. Altmann and Mr. Schoenberg to recover it. I recommend Woman in Gold highly to anyone who enjoys a good story told well.

This biopic about Joseph Mallord William Turner (1775 – 1851), arguably England’s most famous artist, not only depicts the last 25 years of his life but paints an amazingly detailed picture of the world in which he lived.

Turner seems an odd choice for the subject of a movie because he was not a nice man or even a pleasant one. There was nothing noble, heroic, or revolutionary about him as a man—all that emerges in his work. Timothy Spall plays J.M.W. Turner brilliantly as a Dickensian toad, a short squat man of no good looks whatsoever and limited social skills. It’s not that he doesn’t know how to get along with others, including his own family, he just doesn’t see the point of doing it.

Frequently inarticulate, Turner communicates with looks, gestures and grunts, deploying his precious words only when absolutely necessary. He does not suffer fools gladly—or anyone else for that matter. Despite such misanthropic ways, Turner succeeds in marrying two women and gaining the love of a third despite his casual use of her sexually. This seemed a stretch to me but there’s no accounting for taste and history is what it is. I wish the movie had spent more time exploring his painting instead of his relationships but perhaps less documentation existed for such a depiction.

Turner’s work foreshadowed the impressionist school with its broad sweeps of color and light. Very little is realistically painted and solid objects often appear fuzzy.  Like the Impressionists, he sometimes painted en pleine air, which is to say outdoors instead of in the studio. An exhibition at the Royal Academy of Arts shows how wild and different his work was from anything else that was being painted at the time. 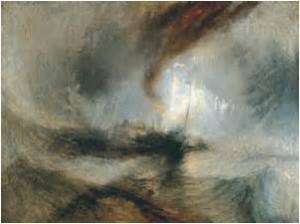 Snowstorm: Steamboat Off a Harbor’s Mouth by J.M.W. Turner

We do get to see the famous scene in which he has himself lashed to the mast of a ship so that he can experience a storm first-hand. This gives him the visuals he needs  to paint wind, waves, spray and snow. The result, “Snow Storm: Steamboat Off a Harbor’s Mouth,” is one of his greatest works.

I learned a lot about Turner in this film and found it fascinating. I can’t say that I really enjoyed it, however, because I spent two hours in the company of such a totally repulsive human being. Nothing stirring or dramatic occurs in the course of Mr. Turner—we just see a man going about the day-to-day activities of his life. The fact that it is a famous life is almost beside the point.

Mr. Turner is highly visual, as befits a film about an artist, but any student of English literature from the period should watch it just for the atmosphere. It received many awards and was nominated for four Oscars: cinematography, costume design, original score, and production design. It should have won at least the first two.

I caught this movie on demand while my husband was watching the Final Four. Although painting is only tangential to the film, the portrait is real and perhaps more famous than its subject.

Belle gives us a real-life story inspired by an illegitimate mixed-race woman who was the daughter of a Royal Navy Admiral in 17th century England. Raised by her grandparents while her father is at sea, Dido Belle Lindsay (1761 – 1804) views from the inside a case being decided by her grandfather, Lord Mansfield, the Lord Chief Justice. The case concerned a slave ship whose captain decides he prefers an insurance claim for the value of its “cargo” over the profit of selling the slaves.

A Period Piece of Great Import

Belle is beautifully done from the cinematography to the costumes to the production values. The acting is superb, given to us by a cast familiar from other British films and TV shows from the Best Exotic Marigold Hotel to Downton Abbey. The film offers a wonderful period piece that also addresses two topics of great import: the role of a woman of color in society at that the time and the ongoing legality of slavery in England.

Oh, yes, the portrait. Dido Belle is painted with her half sister Lady Elizabeth Murray, with whom she has grown up. The double portrait by an unknown artist hangs in Scone Palace in Scotland. The pose given to Dido Belle is something of a mystery, with the young woman moving away from her sister and putting a finger to her cheek.

I recommend this movie to lovers of period drama and plain old good films, but it will appeal more to women than men. Fans of Jane Austen and @DowntonAbbey, this one’s for us!