Not many cities can boast both a luxury hotel in an old jail and another in Police Headquarters. Visitors to Boston can take their pick in this cops-and-robbers approach to overnight accommodations. 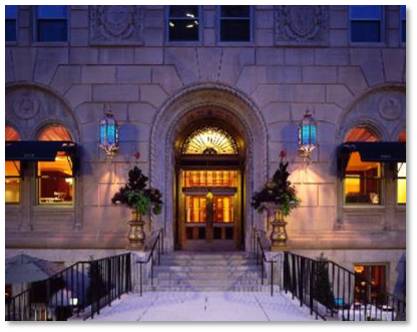 In a comparison, though, one can’t help thinking the cons got a better deal than the cops. Inmates at the old Charles Street Jail had a soaring rotunda and a bright cupola while the officers at Boston Police Headquarters worked amid a smaller and more restrained elegance.

The old Boston Police Headquarters building at 154 Berkeley Street on the south edge of the Back Bay was built in 1924. The last major Italian Renaissance Revival building erected in the city, it was designed by the Boston architectural firm of Ritchie Parsons & Taylor. 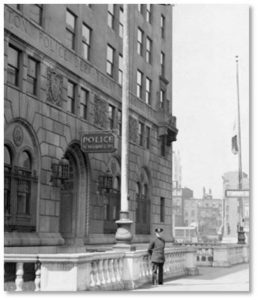 Boston Police Headquarters back in the day

Many of us remember when the building was operational with police cars double parked and slowing traffic on Berkeley Street. In 1997 the Police Department moved to its brand-new, state-of-the-art building downtown and the city boarded up the classical building on Berkeley Street.

It remained unused until an Irish hotel chain purchased it, then renovated and expanded the structure to open what was then Jurys Boston Hotel in 2004. Re-branded the Back Bay Hotel in 2009, It’s now the Loews Boston Hotel, a 225-room luxury establishment.

Unlike the Liberty Hotel in the old Charles Street Jail, little remains here of the original building. The marble and limestone exterior was restored to a like-new state when workers repaired 79 years of wear and tear and buffed away the city grime. You can see the rusticated stone base, high arched main door and double-arched windows with voussoirs. Four carved municipal seals decorate the second floor along with ornate box balconies atop scrolled brackets on the corners. Carved stone eagles guard each balcony. 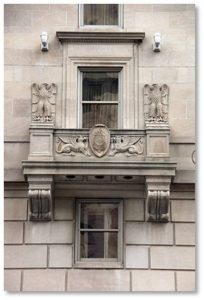 The large lanterns on either side of the main entrance on Berkeley Street still glow police blue. The 13-foot, polished brass, exterior doors greet you with their original Italianate elegance. The foyer and interior doors are is also original to the building, as is the lobby, although the tile floor and woodwork are polished to a gleam higher than any the police probably saw.

The rest of the seven-story building was gutted and renovated while two extra floors were added on the top. A a new main entrance on the Stuart Street side opens beneath a flared, double-tiered aluminum canopy.

The remodeling left little of the original interior — the new space is sleekly contemporary yet warm and inviting — but links remain to the crime-and-punishment past of the original structure. You’ll find nods to the old Boston Police Headquarters in the framed historical photos of Boston officers on duty in all kinds of situations and weather conditions.

Downstairs, you’ll find the old safe and the Precinct Kitchen + Bar in the space formerly occupied by the holding cells. Prisoners were detained here while they were processed and then taken across Boston to the Old Charles Street Jail. No offenders actually stayed overnight in the building that is now dedicated to overnight accommodations.

Room 638 on the sixth floor was fashioned from the police commissioner’s old office. You can check out a display of nightsticks and handcuffs in a glass case in the pub. 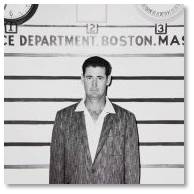 Famous visitors included the Albert DeSalvo (The Boston Strangler) and “Specs” O’Keefe, the man who ratted out the Brinks Job gang. Red Sox Left-fielder Ted Williams once stopped by to get his mug shot taken, just for fun. William Friedkin used the building as a location for his 1978 movie, “The Brinks Job.”

Some Saturday night you can do your own cops-and-robbers tour, following the path of Boston’s more notorious residents. Start with dinner at The Precinct restaurant in the Loews Boston Hotel and then cab over to the Liberty Hotel for drinks at the Alibi Bar. 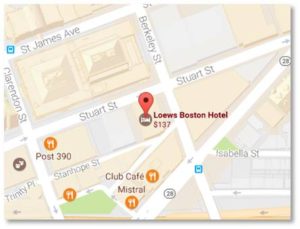 The hotel is a short walk from both the Back Bay train station and the Arlington Street MBTA stop. Parking is, as always, most affordable at the Boston Common Garage, which is also just a pleasant stroll through the Public Garden.