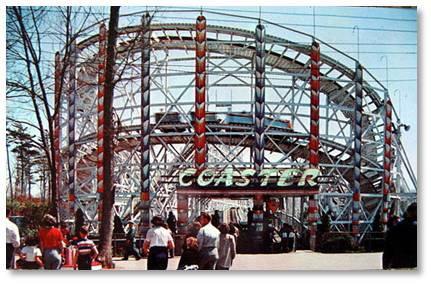 While writing yesterday’s post “An Astounding Question,” I thought about the three lessons I had learned from having the prize taken away:

The Big and Scary Coaster

While looking at the picture of The Comet roller coaster, I remembered a fourth lesson. When I was a kid growing up in Somerset MA, The Comet was big and scary. Like all wooden roller coasters, it made a lot of noise: the click-click-click of the train climbing the lift hill, the thunder of the cars as they dropped, the roar of the train going into a turn, the screams of passengers, the clack-clack-clack as it pulled into the station at the end of each run.

I was afraid to go on it.

In addition, we had all heard stories of people being injured on the ride, which only added to the fear. (Several fatalities occurred on The Comet and Shadowlands lists Lincoln Park among its haunted places in Massachusetts, particularly the roller coaster.) But I didn’t like being afraid of an amusement park ride. I also wondered why so many people seemed to be enjoying the experience. They didn’t look terrified getting on and they were laughing and joking when they got off. Surely there was something going on here and I was missing it because I was scared.

Fear is the Mind-Killer

So one year I decided to get over my fear. The only way I could think to do that was to get on The Comet and ride it over and over until it stopped being scary and I could enjoy it as much as others did. That first ride, especially that first climb up the lift hill, was truly terrifying. I survived the drop and the rest of the ride, screaming like everyone else. When the train clack-clacked back into the station, I got back in line and rode it again. And again. And again. It took eight consecutive trips around the track before I stopped being afraid and enjoyed the ride. 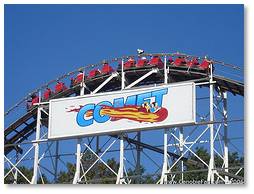 On the lift hill

The lesson learned was that you can conquer fear and I have loved roller coasters ever since.

Looking at pictures of The Comet in its heyday, it seems small and not terribly intimidating. Since then I have since been on much bigger, taller, faster, and meaner roller coasters.

White wooden coasters are in a category of their own. Since Lincoln Park, I have ridden loop coasters that ride on a metal track, inverted coasters where the cars hang from the track, and dive coasters where the train drops straight down at 90 degrees. (I have not yet ridden the new flying coasters where the passengers hang down from the cars and fly like Superman or the huge vertical coasters that blast cars out of the station with steam cannons and drive them straight up, over the top, and down again. But I will when I can.)

Coasters I Have Loved

But nothing matches a wooden coaster for the complete experience, including the distinctive sounds they make and the fact that they seem more rickety than they really are. (Well, The Comet actually was pretty shaky.) Some of the best I have ridden are:

Coasters I Have Missed 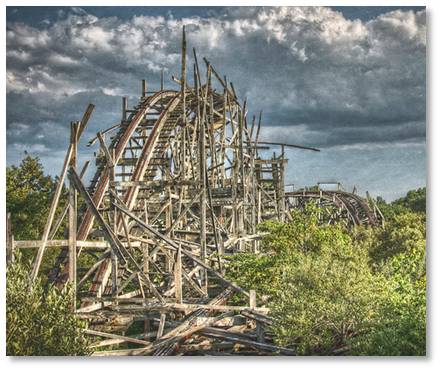 The Comet in its final days

Oddly enough, I never rode the famous Cyclone at Coney Island even though we lived in Brooklyn for nearly four years. We went out there every summer to get the Nathan’s hot dogs and to walk along the boardwalk but the closest I ever came to riding it was on YouTube. Neither have I been on the Cyclone at Six Flags Over New England.

The Comet is gone now, as is all of Lincoln Park. It’s been replaced by The Homes at Lincoln Park Place. I’m sure they’re lovely but they can never replace the amusement park that I and many others loved as a kid. I wonder if residents of the new homes will hear the roar of the coaster and the screams of the riders on warm summer nights.

I haven’t ridden a roller coaster since 2007 when I went on the Manhattan Express in Las Vegas — the last of many trips. It’s time. I’m overdue. I need to get out there and scream. Maybe we can take the granddaughters to Six Flags this summer. They can do the kiddy park with mommy and grandpa while my son-in-law and I go for the big rides. Grandpa and I showed the girls coaster videos on YouTube last week and they loved them.

I’m looking forward to it and I’ll let you know what I learn.