Every day astonishes me anew at the things we have lost in the country in such a short time. Among them:

We have been down this road before (except for the spelling). In the fifties, a real “witch hunt” divided America, led by Wisconsin Senator Joseph McCarthy. In his shameless and soulless harassment of private citizens, Joe McCarthy destroyed careers and even lives by accusing people of being Communists without either proof or evidence.

The “McCarthy Era” transferred the World War II fear of Germans and Japanese to the new post-war target of Russia and Communists. Once our ally, Russia now demonstrated expansionist ambitions and held a nuclear weapon. Sen. McCarthy and the House Un-American Activities Committee set as their goal to root out secret Communists in this country.

Appalled by their no-holds-barred tactics, Maine Senator Margaret Chase Smith on June 1, 1950, issued her “Declaration of Conscience.” In it, she said that she did not want to see her party, the Republican party, “ride to political victory on the Four Horsemen of Calumny—Fear, Ignorance, Bigotry, and Smear.”

Yet, here we are again.

The Four Horsemen of Calumny

The current administration deploys the Four Horsemen of Calumny regularly and indiscriminately.

The Soul of the Country

I wonder what Senator Chase-Smith would make of her party now. I wonder if she disagreed with it in 1968 when Richard Nixon’s “Southern Strategy” essentially flipped the party of Lincoln and the party of Jim Crow. She lost her seat in 1972 after serving four terms.

This is not about politics, people. It’s about the soul of this country, which is being dragged through the mud daily. Internationally, our government is a laughing stock. People respond to the Four Horsemen of Calumny by going into denial. “This is not us,” they say, or “This is now who I am.” But if you voted for this and you support this degradation of our national spirit, well, you own it.

Bailing Out of the Party

Notable and distinguished Conservatives have begun leaving the party they have belonged to all their lives. George Will, Bill Kristol, Steve Schmidt, John Kasich, and Robert Duvall have all bugged out, along with a crowd of state senators, representatives and mayors. They have stepped back in an attempt to distance themselves from the Four Horsemen of Calumny and their impact on America. A record number of Republican Members of Congress have chosen not to seek re-election, including the Speaker of the House. 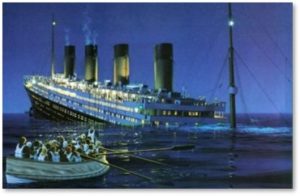 What comes next? Who knows? It’s up to the American people. We can begin turning things around in the November mid-term elections. Will that happen? We’ll see. Until then, anything goes. We need another Margaret Chase-Smith to declare her conscience and rein in the Four Horsemen of Calumny.

PS: I know I used a lot of big words in this post. It’s just my education talking.