By now anyone with television and Internet is familiar with the story of the gorilla and the boy at the zoo. Emotions on this topic run high and wide. There are those standing with the gorilla and those defending the humans. Many of them are parents and grandparents; none of them has ever been a gorilla. 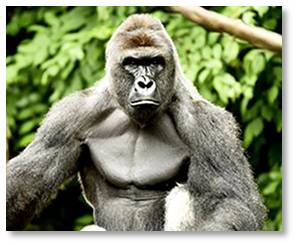 It comes down to this:  how valuable is a human life?  For me, there is only one answer. I close my eyes and replace this unknown child with my own and I am paralyzed with fear. I feel my heart stop.

Zookeepers at the Cincinnati Zoo had to make this choice when a three-year-old boy fell 15 feet into the habitat of Harambe, a beautiful 450-pound silverback gorilla. Nobody could predict what would happen, although hundreds of thousands of people would beg to differ. After ten gut-wrenching minutes of horror, panic and fear, the zoo crisis team shot and killed Harambe in a decision that valued the life of the child over the life of the gorilla.

Public outcry against this action has been weighted with more concern for the animal than the child. The Internet has consumed itself with petitions and tributes. The boy’s family has been accused of negligence, with calls for criminal charges and open death threats. Who is right?

On Behalf of the Child 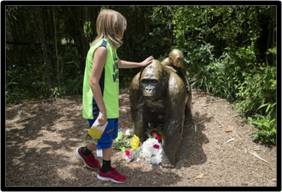 Nothing rivals the curiosity of a determined three-year-old. I know this because I had one. I was a good parent but often thwarted by the persistence of a child going after what he wanted. We can’t blame a three-year-old for acting like a three-year-old, so we have to blame the parents.

We need to believe we are better parents than the mother whose child fell into the gorilla pit the same way we know our own child would never lie, swear, take drugs, steal, cheat, get drunk or skip school. Why?  Because we would never let that happen. That would make us negligent. Yet the world is full of good parents who have experienced the tragedy of an accident caused by distraction.

This little boy wanted a closer look at that gorilla. The barrier, never breached in the zoo’s 38 year history, was outsmarted by a 3 year old. Maybe the gorilla wouldn’t have intentionally killed him, but think of the damage he could do just playing with the child.

My heart is filled with compassion for that mother. I can’t imagine what she was feeling and I don’t ever want to be her. But the truth is; I have been her. It is easy to be blind to our own negligence, yet see it so clearly in others.

There are those who say Harambe should have been tranquilized but the weight of professional opinion is against it. There was too much risk, including increased agitation, delayed effectiveness, and the gorilla potentially falling on top of the child with both of them drowning. The zoo’s risk crisis team stands by their decision and they understand gorilla behavior better than we do.

On Behalf of Harambe

My heart aches for Harambe; raised in captivity in a place not his home—not even his native country—and put on display. Western lowland silverback gorillas are critically endangered with fewer than 100,000 in existence. They do not belong in zoos, but are at risk in the wild. Harambe’s protection was the zoo enclosure he was locked in; violated when a human entered it and placed both of them at risk. 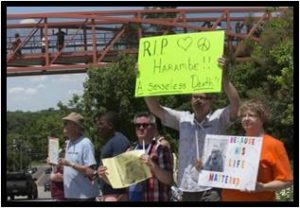 Gorillas in captivity have been known to suffer both physiological and behavioral issues including heightened aggression caused by sounds, light conditions, odors, habitat constraints, lack of proper hiding areas and forced closeness to humans. There is dispute about what Harambe’s intentions were, but none of us will ever know what went through his mind when a child suddenly dropped in front of him.

What we do know is that an adult male silverback gorilla’s primary job is the protection of his group. He does this by bluffing and intimidating anything that threatens him. Males engage in very elaborate displays when agitated, slamming and dragging objects to generate as much noise as possible. He saw an object, not a child.

A male silverback has the strength of ten adult males. Even experienced zoo workers keep a safe distance when working with gorillas. These animals are not the fictionalized King Kong of the movies, but their incredible strength and aggression are real. Gorillas can be kind, curious, and even playful but that never negates the fact that they are very large, very strong wild animals.

Harambe and the boy at the zoo can teach us something. Both found themselves in the wrong place at the wrong time and became a split-second decision between two untenable options.

Apart from the tragedy itself, this calls attention to human responsibility for animal welfare.  Because so many animals are threatened we have placed them in captivity to protect the species. Zoo animals are horrifically compromised when forced to live in captivity for human entertainment. Zoos must re-evaluate the safety of their enclosures and work to become sanctuaries for the animals. Parents visiting zoos must remember how quickly a child can move.

It’s time to become conservators of endangered species, elevating their risk of extinction so we can keep them from vanishing. For gorillas, and all the wild creatures on this planet, the greatest gift we can give them is to protect them and let them live freely in their own habitat.

We can honor Harambe, whose name is a Swahili rallying cry that means pull together, by working for the protection and safety of all animals; in captivity and the wild.