The City of Boston has finally realized that building an entire new neighborhood with limited access is creating traffic problems. Yay! I predicted this back in 2014 and, frankly, anyone with a brain could have seen a major-league traffic jam in the works. 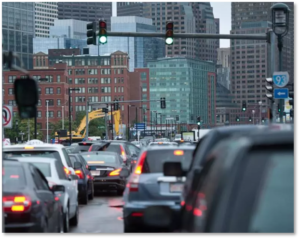 Now city planners and developers have put their little gray cells to work on finding a solution. Going down presents real problems given predictions of sea level rise, and new Seaport structures have been putting their HVAC and other critical equipment on the third floor.

That means going up. Now, I have long wanted a monorail on a loop that goes through the Seaport and Fort Point Channel neighborhoods. That makes a lot of sense to me when you need to move a lot of people in a limited area. Millennium Partners has now proposed another solution:: a Seaport cable car or gondola.

Here’s why. Not only would it take commuters from South Station to their office buildings at rush hour, it would create a profitable tourist attraction during the rest of the day. See the Seaport from the air! View Old Ironsides, the Bunker Hill Monument, the Tea Party Ships, the Custom House and the city from high above street level! Watch the boats in the harbor!

Skeptical? Listen to this.

On our Grand European Viking River Cruise in June we stopped in Koblenz, Germany. That night, the Viking Modi kitchen served a buffet of German delicacies and beers with musical entertainment (think accordion) to make the event more festive. I enjoyed the food and the party but after a while the noise and commotion got to me. I suggested going for a walk to get some fresh air and work off the schnitzel. Everyone at the table agreed.

Going out into the warm night air offered a welcome relief. Having no idea where to go, our little group started strolling along the river. Then we looked up.

A cable car, the Seilbahn, runs from Koblenz across the river and up to the Ehrenbreitstein Fortress on the other side. It looked like fun. Plus, it would give us the chance to see an historic structure that was not on our tour schedule.

We purchased tickets and got on. The cable car swung out over the river and up to the other bank. It gave us a beautiful view of the city and the river, along with the Deutsches Eck, (German Corner) or confluence of the Moselle and Rhine rivers. 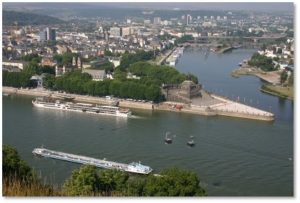 On the other side we began by strolling through the fortress grounds, where paths go through a park planted with wild flowers. We ended up at a very modern structure, a viewing station with ramps that wound up to three levels and offered wonderful views across the Rhine.

The combination of a lovely evening, with the sun bright until after 10 p.m., and summer warmth meant that we enjoyed just being outside, exploring a new city and chatting..

On the other side of the park rose the fortress itself and we made our way there. That night it hosted an event of some kind and people dressed for a party were walking from the Seilbahn in  groups.

The Ehrenbreitstein Fortress, constructed between 1918 and 1828, is the second-largest preserved fortress in Europe. Ehrenbert Conradine began the structure in 1000 AD and a series of different owners expanded and strengthened it over the years before it was blown up in 1801. 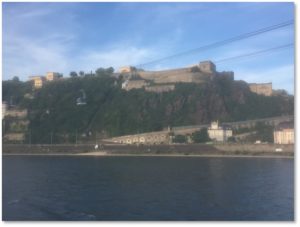 In 1815 King Friedrich Wilhelm III ordered it expanded into a fortified city—one of the largest in Europe—as the backbone of a regional system of fortifications. It guarded the Middle Rhine from further invasion by French troops.

We only walked into the fortress a little way because it is so large (and because there was no map to show us where to go). With the fortress all lit up for the event and party-goers strolling past us, we felt like we had stepped into living history.

Despite the lingering sunlight, time passed and we made our way over the moat and back to the Seilbahn. Our car lifted up just as the sun was setting on the horizon and we slid back down the cable to Koblenz as dusk fell on the city. 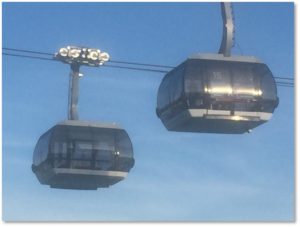 Cable Cars Above the Rhine River

A spontaneous trip, an evening of surprises, strolling through a garden, visiting an historic site: a cable car made all this possible. And it was so easy to do. After purchasing our ticket, we walked in and waited for a car to slow down with its doors open. We got in, the doors closed and off we went. No conductor, no fuss, no wait.

Boston could do the same thing, although the city lacks the 387-foot promontory that gave us such great views in Koblenz. Still, if Millennium Partners is serious about this proposal, they could do worse than look to Koblenz for good ideas on how to make a cable car work in an urban area.