Last week I was in an old building that had never been air conditioned. A fan, one of the black oscillating fans, was running in the corner, swiveling back and forth as it moved the hot air around. The drone of its motor brought back memories because, when I was a kid, that was one of the sounds that meant summer had arrived. Some of those sounds are still with us while others have disappeared, pushed out by the forces of progress and technology. From my childhood back in the day here are seven sounds of summer.

There the cooling method of choice was the oscillating electric fan and they could be found everywhere. Big fans on stands stirred the air in large areas while small fans perched on desks, filing cabinets, shelves, and countertops to dry sweaty necks and arms. The drone of fans could be heard in homes, shops and offices. 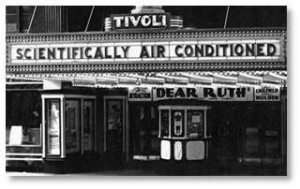 There were no malls or fast-food restaurants.If you wanted air conditioning—the real deal—you went to the bank or the movies. Theaters advertised that they were “healthfully” or “scientifically” cooled by refrigeration and the price of a ticket would also buy you two hours of relief from the summer heat. The whir of oscillating electric fans has largely disappeared in many places but it was oddly soothing and conducive to an afternoon nap. 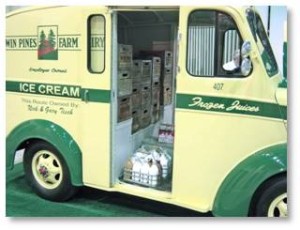 That distinctive clinking-rattling sound meant that the milkman had arrived. His milk truck was not refrigerated. Instead, the crates were packed in big chunks of ice. We knew the milkman by name—at one point it was my Uncle Gene—and we would beg him for a piece of ice. We always got one and would walk away with a chunk the size of an apple or bigger to rub on our necks or suck on for instant ice water. Summer and a chunk of clear ice, mmm-mm.

Many other summer sounds are still with us: the jingle of ice cream trucks, the shouts of kids at the beach or the pool, kids playing at daycare centers or summer camps, the clink of ice in a glass of lemonade, but these seven sounds from my childhood bring back sultry days when there was little relief from the summer’s heat and humidity and when free-range kids were allowed to play by themselves without adult supervision. Sometimes we were drafted to push those mowers and then we did so because our fathers told us to or it was one of our chores. It was exercise and sometimes we even enjoyed it although we would never admit that, especially to the parental units.

Life was quieter and slower but that doesn’t mean it was better. I wouldn’t trade my central air conditioning for an oscillating electric fan and I have no desire to push a manual lawnmower. Still, it’s fun to remember some of the summer sounds that made up the hot and happy months of pure freedom before school started again. Although, come to think of it, I would cheer to have milk delivered to my home.