A planned business trip to Jacksonville, located at the top of the state of Florida, led me on an unexpected and educational journey through a rural food desert. I live at the bottom of the state and the only way to get to the top is by car. 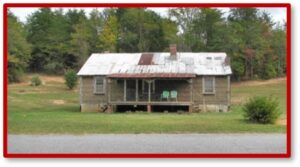 My GPS indicated a six-hour drive ahead of me, so I set out early, avoiding heavy traffic through the Orlando interchanges. I hit the half-way mark before the GPS map turned red, indicating trouble ahead. The directions rerouted me, taking me around the congestion by cutting diagonally across the state onto a rural detour.

Turning off the interstate onto a two-lane road, I found myself in a landscape bearing no resemblance to the Florida I know. One hundred and twenty-four single-lane miles lay ahead of me, beckoning me into an unfamiliar and rural part of Florida.

It’s amazing how quickly the character of the landscape changes on a rural thoroughfare. The concrete disappears, replaced by green fields and fences. There isn’t much else. I see an occasional farm stand or Dollar Store breaking up the scenery, highlighting the absence of retail infrastructure.

In fact, I see a Dollar Store every few miles throughout my journey, a harsh reminder that I am passing through a food desert—an area without fresh meat and produce. I see one two-pump gas station and a few roadside stops offering BBQ. There isn’t a single recognizable name or familiar brand.

The buildings are mostly single story, many in need of repair and most reflecting the below-the-poverty-line income of the residents. On this stretch of highway, there is one way in and one way out.

A notable difference in the landscape is the absence of palm trees. There are over 2600 species of palm trees in the world, and just about all of them can be grown in Florida, but only twelve are native. Fun fact: Most are imports from South America, Asia and India. Continuing development and construction endanger the native palms, forcing state and federal government protection orders.

The fields on either side of me host grazing cattle, outdated farm equipment, and tired outbuildings. A dilapidated school bus sitting in the middle of an open field is an out-of-place visual. The original paint is gone, along with the windows. I think it’s odd, but then again, maybe it’s not, all things considered. Then I see another one about five miles down the road in the same condition. 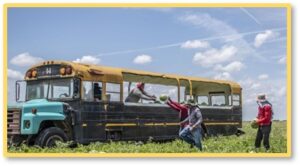 All told, I see half a dozen of them during my drive, with no clue as to their purpose.  Several days later I learn they are watermelon buses; all the seats and windows removed, interiors carpeted and ready to receive the melon harvest.

Throughout North Central Florida watermelon farmers, harvesters and packers purchase the old busses for use during the watermelon harvest. While it is generally known as a summer fruit, Florida is the only state that produces watermelon from December to April.

The busses are only in service for three to four weeks each year, but without them it is impossible to haul the melons from the field quickly and efficiently. The farmers do sell them locally but most are transported to distribution centers for auction.

In the world of hacks, this one rises to the top.

Living in a Food Desert

The term food desert is a familiar descriptor in rural areas, but until last week I had no idea what one looked like. Seeing one is very different than reading about it. I feel the isolation and poverty in this unplanned detour, one long mile at a time.

The concept of a food desert requires two key components:  low income and low access to healthy, fresh foods.  The single most important economic factor for food deserts is the poverty level. The United States Department of Agriculture’s definition is,

In other words, in economically underserved communities, grocery store locations are few and far between, creating a greater reliance on convenience stores. 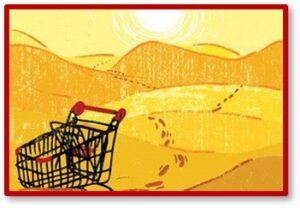 It’s hard for me to describe or even comprehend a food desert because I live in a food paradise. Supermarkets, specialty stores and farmer’s markets abound in my neighborhood. Imagining my life without them is impossible, but it’s real life in this rural part of the state.

On this hundred-mile stretch the only retail stores are Dollar General, Family Dollar, and Dollar Tree. These stores thrive in low-income areas but do not offer residents healthy food options, including fresh produce or meat. There are no chain supermarkets in impoverished areas and most residents lack the resources and transportation to locations offering heathy food options.

A teachable moment rarely follows a linear path. Sometimes it involves sitting with uncomfortable emotions and complex explanations. I did not plan this moment and therein lies the gift of lessons that may otherwise be missed.

Despite the harsh realities of living in this rural area, there is beauty and peacefulness in the landscape. The drive turned into a visual respite and I was almost sorry to see it end. 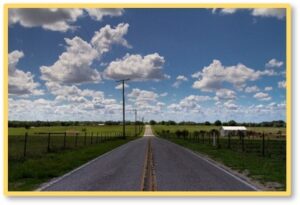 An hour and a half into my detour I begin seeing signs indicating a return to the main interstate. I think of Robert Frost’s The Road Less Traveled and realize the serendipity of my opportunity is the gift of a congested main highway.