Every once in a while, I see a clickbait theme pop up on Facebook that focuses on what weird foods people ate in the fifties. These articles feature garish photos of ingredients and dishes unknown to diners today.

I grew up in the fifties, so none of these photos shock me, but I have something most of today’s readers do not—perspective. In that post-World War II decade, America began coming back from rationing while at the same time entering a new era of prosperity fueled by the GI Bill. 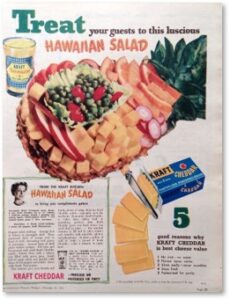 Returning veterans could afford houses, courtesy of the U.S. Government. They got jobs that paid well thanks to unions and women being forced out of the factory jobs they had held during the war. Not much of that money was spent on restaurants, though. Eating out was a rare treat and fast food didn’t exist.

Some of that new prosperity was spent on processed foods—a whole new category of comestibles that had never before existed. Remember, our grocery selections were much more limited back then. No one had ever heard of harissa or za’atar, wasabi or Wagyu, pesto or even pasta.

Even words we use to describe food today didn’t exist in the fifties. Not a few arose later in reaction to the processed foods invented in that heady time. We had never heard the terms:

Supermarket items we now take for granted appeared for the first time as innovations on supermarket shelves, in TV commercials, and in magazines published for women who found themselves housewives almost overnight. Those women wanted to feed their families nourishing, tasty, and healthy meals. They didn’t want to spend the long hours in a hot kitchen their mothers and grandmothers had endured.

Experts hailed anything that made cooking quicker and easier as paving the road to a bright new future. Plus—and this is important—processing improved the shelf life of a product, along with speeding up its preparation. That made them both cheaper and more convenient. Food scientists considered processed food as good, new and improved. 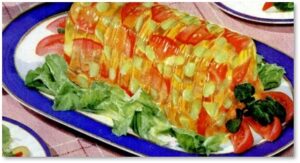 Here’s a list of some food products born in the post-war baby-boom decade. Keep in mind that the brand name generally indicates the first appearance of this food on the market:

Now, once you have all these new foods, you have to sell them if you want to make money. Manufacturers became very savvy about pushing their products into the American market. They deployed broadcast advertising, including on radios and the brand-new TV sets, as well as print ads in magazines, and newspapers. Editors of women’s magazines vied to entice housewives with creative recipes. Supermarkets ran coloring contests for the kiddies. 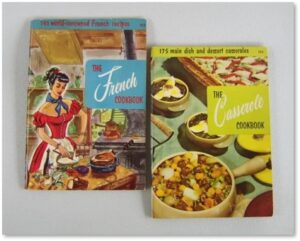 Companies hired chefs to create new recipes. They produced cookbooks that disseminated recipes featuring specific products.  And last, but by far not least, they employed food stylists to make the final product look more colorful, richer, sweeter, thicker, juicier, and more appetizing than it really was.

Thus, was born the foods featured in the online click-bait articles we see today. Some of those newly created foods actually made sense, tasted good, and caught on. Meatloaf, for example, and shrimp cocktail or tuna-noodle casserole. Those casseroles, in fact, became the food emblem of the fifties. In many parts of the country they are still dietary staples. 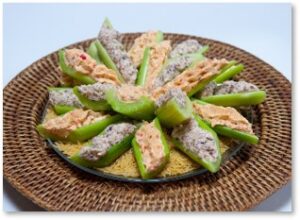 That’s how we arrived at the more dubious concoctions featured in today’s clickbait slide shows. If you don’t believe some of these recipes actually existed, just take the bait and click the link.

Not every housewife made these recipes, of course—or made them more than once, at least.

My mother preferred to cook from scratch and she was a great cook. We never suffered through Hamburger Helper, Rice-a-Roni, or Mock-Apple Pie. She read recipes, clipped out the good ones and tried them. She watched Julia Child on TV and took notes. I think we tried frozen dinners once, and that was enough. 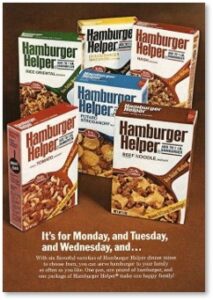 We learned that creativity does not always equal toothsomeness. Also, that because you can do something doesn’t mean you should do it. Fluffy Mackerel Pudding, for example. Or the Sunny Citrus Steak I once saw in a cookbook and tried.

Over time, recipes improved, our culinary tastes broadened, ingredients became available, and we discovered that processed is not necessarily a good thing. Just remember when you see one of those clickbait horror shows, that the fifties were a moment in time and there was a reason behind all those weird recipes.