This weekend Seth and I participated in the Bitnorth Conference, an invitation-only event produced by the peripatetic Alistair Croll and run by his hard-working sister, Actress Rebecca Croll.  Located “a bit north” of Montreal—which is to say a two-hour drive into the backwoods—Bitnorth is a conference unlike any other I have attended.  I would have expected nothing less of Alistair. He’s an entrepreneur, author, and event organizer focused on emerging technologies and how they’ll affect society. 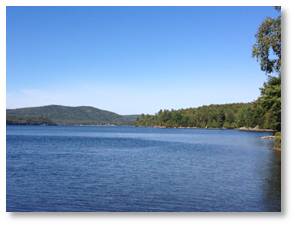 As I wrote in a previous post, Bitnorth is an eclectic gathering that takes place at CAMMAC, a “band camp” on the shore of beautiful Lake MacDonald.

I can honestly say that never before have I engaged in such deep and continuous debate about such a wide variety of subjects with such an eclectic and intelligent group of people for so much time.  Aside from the agenda, which was packed with fascinating presentations, we talked about subjects ranging from social trends to scientific innovation, from politics and economics to religion and civil affairs, from the important to the trivial, and from the professional to the very personal.

Alistair Croll (BitCurrent, Year One Labs, GigaOM, Human 2.0, Solve For Interesting) and  the author of four books (Complete Web Monitoring, Managing Bandwidth: Deploying QOS in Enterprise Networks and Lean Analytics), knows a lot of interesting people from the U.S. and Canada as well as other countries.  They flock to Bitnorth every year and now I know why.

Anywhere that people gathered, a conversation arose.  Folks talked in the meeting room, the hallways, the porch overlooking the lake, at meals, around the campfire, and where smokers inhaled (I avoided those). Talk often turned to debate and sometimes into argument—but always in a friendly and respectful way.  With people of such ferocious intelligence and considerable education, that respect is essential.  These people knew their stuff and had all their ducks (or loons) in a row.

Bitnorth is different from many conferences in that everyone who participates is on the agenda.  Each person gets from five to 10 minutes to present on a subject of his or her choice and this year’s theme was about learning new things. 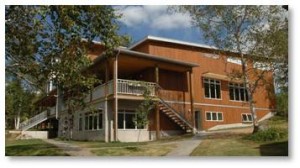 I spent a large part of this summer learning a new tour for @BostonByFoot—the Dark Side of Boston—so I did my presentation on the Great Molasses Flood of 1919. Some people had heard of it but knew few details while most knew nothing of this disaster in Boston’s history.  I got a lot of questions afterward and many people said how much they enjoyed learning about this tragedy.

(If you want to hear more about it, join me on the Dark Side of Boston tour on October 4 at 6:00 p.m. We meet at the corner of Hanover and Cross streets by the statue of the boxer.)

I didn’t take many pictures at Bitnorth—just a few of Lake MacDonald when I went for a walk. Fortunately we had Eva Blue, a professional photographer, who took many pictures. I’ll post some of those when they’re available.

From the porch we could hear the loons on the lake and, presumably, they could hear us on the land.  I doubt if we sound as nice to them as they do to us but one can never tell.  On Sunday’s drive back a young white-tailed deer, a yearling buck, ran out in front of our car and dashed into the woods on the other side.  I hoped to see a moose but had no luck with that.

Then we headed to Montreal for a few days in the city. More on that later.