Remember the Choose Your Own Adventure books of the ’80’s?

Those books have been reincarnated, here in the digital age, as text-based adventure games. And they’re so much better. Today’s games, designed for adult readers, keep track of your choices and how they reflect your character’s personality. So, what you choose determines much more that just “what happens.” Your actions, your capabilities, your relationships with other characters, and your possible futures are all under your control. Reading a story of this kind is a truly immersive experience; you feel you are inside the world of the novel. 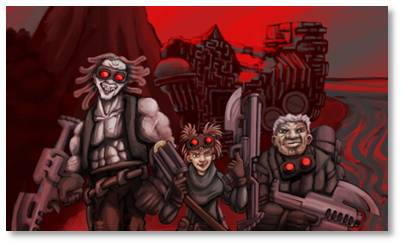 I recently had the privilege of writing one of these games, entitled Reckless Space Pirates. In my game, you have been kidnapped by space pirates on their way to a forbidden planet. Will you join them and plunder an alien colony? Or will you resist, and save the aliens from the rampaging pirates?

(You can download Reckless Space Pirates for very little money at the App Store, Google Play, or Amazon).

An Adventure in Writing

Writing the game was an exercise in freeing my imagination, because the central question became not “What should happen next?” but “What could happen next?” Instead of searching for a right answer, I was compiling as many interesting answers as possible. Every simple exchange of dialogue was fraught with possibilities, as I imagined how the secondary character would respond if the reader’s character was loved, respected, distrusted, or dismissed.

Alternatively, I sometimes felt as though I were writing with my hands tied, as I struggled not to say anything that would be inconsistent with any of the myriad choices the reader might have made. When I write regular fiction, the point of view character’s mood usually colors the scene, shading even the description of the physical setting. In Reckless Space Pirates, the reader’s character might show up to a scene in literally any mood. The scene must work whether the reader’s character is a sensitive hacker who has just achieved a small victory, a hardened space veteran who has just lost a fistfight, or anything in between. 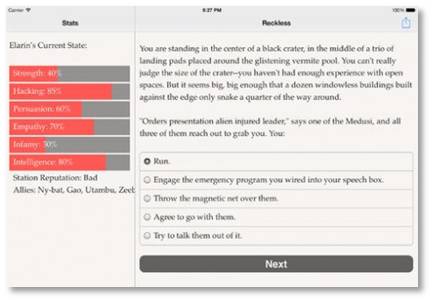 Check your stats as you play

The plot of an interactive novel must branch and converge, branch and converge – or else the author would need to write millions of words. (As it is, each reader only reads about a quarter of the possible text each time through, so while I wrote enough words for a novel, the game is only as long as a novella from a reader’s point of view.) The need for convergence creates a series of fixed points in the story, events that happen no matter what the reader’s character does.

In a regular novel, this inevitability would create a problem with the main character’s agency. With the help and advice of the wonderful people at Choice of Games, I learned to solve this problem with careful programming. As the reader’s character responds to these fixed situations, succeeding or failing to overcome obstacles, building or destroying relationships, data is collected. When this data is used to determine the final branch that the character will travel – the only branch that is free to continue outwards from the story with no limitations – it seems to the reader that the character’s actions did determine the outcome of the story.

Of course, good old-fashioned craftsmanship has a role to play, too. I had to sell the inevitability of the fixed points, both by crafting difficult situations that could not be avoided, and by transferring some of the agency to the secondary characters. The genre demands a cast of rich, intriguing secondary characters, since the main character is fluid. I enjoyed meeting that challenge, peopling the starship Reckless with a mismatched crew and creating an alien culture. Once I thoroughly convince the readers that second-in-command Krantic is a dangerous maniac teetering on the brink of sanity, for example, then they can accept that he will plunge the story into chaos at a certain point, despite the best (or worst) efforts of the reader’s character.

I wrote Reckless Space Pirates in choicescript, a simple and free programming language designed by the Choice of Games creators. I had no programming experience at all, and I definitely experienced a learning curve, returning to the beginning scenes to add more sophisticated code. But it was easy to learn ChoiceScript, so much easier than I feared, and I definitely recommend it to anyone who is interested in writing interactive fiction. Also, as a teacher, I immediately recognized how easy it would be to use ChoiceScript to create self-grading quizzes and homework, though I’m not in the classroom right now and haven’t tried it out. So, I encourage educators as well as writers to go to choiceofgames.com, select the “Make Your Own Games” tag, and download the free program.

To learn more about me and my writing, you can visit my website at rachelzakuta.com. Thanks, Aline, for lending me your microphone. It was fun!

NOTE: Rachel and I are members of the SpaceCrafts science fiction writers’ group and I played this game multiple times as she developed it and put it through the group’s critiquing process.  Here are the questions you will find yourself dealing with in the course of the game:

The first time I played it, I acted like I try to behave like my real self. My character was honest, helpful, kind — a good guy. The game was fun.  The next two times I read it, however, I made my character totally different.  In various iterations, he was mean, nasty, selfish, stupid, unkind, etc. It was a lot more fun that way.  Who knew?

You can play the first part of Reckless Space Pirates for free.  Beware: it ends on a cliffhanger.