I was too sick to take part in the Women’s Marches in Boston, much less Washington D.C., but I was present in spirit with my many friends who did participate in both. Here is Alane’s report on what it was like to be at the Women’s March on Washington. — Aline

It all began with one woman’s good idea and it has turned into a movement. I took part in the Women’s March on Washington on Saturday and it was positively energizing. From the cleverly worded signs to the sea of pink hats, it was clear that the message had gone out far and wide to meet at Independence and Third. 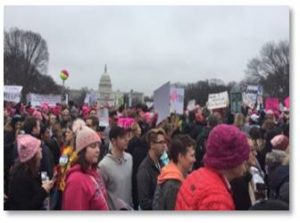 The crowd gathers at the Women’s March on Washington

That’s where the rally would begin at 10 a.m., with speakers and celebrities and musicians and poets. Women of all creeds and colors appeared on the dais and on jumbo screens to give us our “marching” orders—and tell us when to begin our orderly slow-paced walk down Independence Avenue to the Ellipse.

There, the 45th president of the United States could look out a White House window and see the crowd of women—and men, and children, and teens, and seniors, and disabled—confronting him with a plea to hear our voices.

Planning to Get to the Women’s March on Washington

I had jumped at the chance to go to the march when my friend invited me to join her and her sister from Delaware. My college roommate and “bestie” joined us and our foursome began our plan. The Three Bostonians would go to Philadelphia on Friday, stay at sis’ house in Wilmington, then get up at the crack of dawn on Saturday morning. From there we would drive the 100+ miles to a Maryland train station parking lot to find a spot for the car, and take the train into Union Station, and then the DC Metro to the march.

Our attempt to jump on one of the organized buses from the Delaware delegation had already been thwarted; by early December, every one of their buses was sold out. Other states were reporting the same thing. Was this a sign that those who otherwise would have attended wouldn’t be able to, or did it mean that more women like us would independently find their way to DC?

With our plan in place, we wondered, would we find a place to park? Should we prepay for our train tickets? Who could pick up our Metro cards? What was the nearest Metro station? The early reports had the estimates at 100,000 attendees, derived from those who had checked “interested” on the Women’s March Facebook page. Would there be more?

The Plan Gets Better

Two weeks before the march, my son called me late on Sunday night. The Patriots had just won their game; I thought he was calling so that we could boast like the “homers” we are about Tom Brady, clinching home field advantage, and the team’s chances at a record 5th Super Bowl win. Instead, he had a proposal; he had just watched the game with a friend who lives four blocks away in DC who would be out of town for the inauguration. Did we want to stay there? 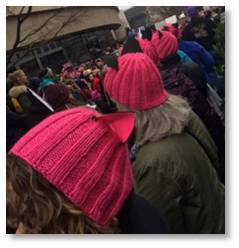 Now our plan was even better. We arrived in DC on Friday and got the chance to put together our march plans over dinner with my son, his girlfriend and her mother. That night, we made our sign: “Hey Mr. President, you work for us now. And guess what? YOU’RE FIRED!!!”

On Saturday, our group was ready: the powered Seven, six women with pink hats knitted by my neighbor and one man (my son) with a pink shirt worn in solidarity. And that’s when we felt it. Because everyone around us had pink hats, pink shirts, pink clothing. The streets were filling with people carrying signs, smiling, eager, and ready to engage. People posed for this moment, in selfies, on cameras, on iPhones –aware that something historic was taking place.

Signs of the Times

We were entertained along the way by signs like:

As we tried to move along with the crowd to find a place where we could hear the speeches, we came to a standstill—bottlenecked. So, we zigged and we zagged our way across several streets to a place where we could hear the speeches and get a peek at the giant screen. We stood and listened, and cheered, and chanted until, cold and hoarse, we were finally told it was time to march. That’s when we realized how big this thing really was. The original route of the march up Independence had to be changed to accommodate the crowds.

How Could We Have Done This?

As we moved up the new route on Constitution Avenue, we merged with other streets, filled with thousands of marchers, hundreds of signs, and more chants. The crowds got bigger and the chants got louder:

And then it hit me. I have protested against and demonstrated for many things in my lifetime, but I have never directly targeted my voice against one person. And this time, at this particular moment, I was directing my ire at the President of the United States of America. My country’s president. How could he be the one in office? How could we have done this?

And, amidst the cheers, and the smiles, and the laughter, and the uplifting messages, I was deeply saddened. I respect the presidency, I respect our democracy, I respect the Constitution, I have the deepest love for our country. To think that I had no respect for our newly inaugurated President cut to the depths of my soul.

And then I woke up. I realize that I respect our freedoms more than any office or figurehead. Our ability to speak, and shout, and chant, and march is what makes America great. And, what started with one woman using her freedom of speech and posting an invitation to join her on a march turned into this woman, me, standing in the streets of Washington remembering what I told myself I came here to do: To no longer accept the things I cannot change but to change the things I cannot accept. And I held up my sign, adjusted my pink hat, and kept walking.

Coming next: What happens when the marching is over.