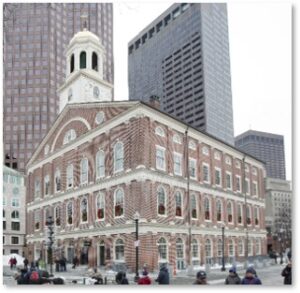 Faneuil Hall is one of those historical places that the locals visit once, usually on a school field trip, and never go to again. Maybe. My husband grew up in Brooklyn and never went to the Statue of Liberty. For those of us who last set foot in Faneuil Hall somewhere in middle school, consider making another trip.

In addition to significant history, the building also offers another stop on my tour of art hidden in plain sight outside of Boston’s museums.

Built in 1742 Faneuil Hall is a stop on Boston’s much-traveled Freedom Trail and it is known as the “Cradle of Liberty.” The irony of that sobriquet requires an understanding of the man who built it and what went on inside his gift to the city.

Peter Faneuil was a French Huguenot, or Protestant, who is uniformly described as coming to Boston to flee religious persecution in his native country. In 1685 King Louis XIV, the “Sun King” was persuaded by his mistress, Madame de Maintenon, to revoke the Edict of Nantes and thus outlaw the Protestant religion in France.

Irony #1: The Huguenots came to Boston, then a Puritan theocracy where the ruling Protestants had outlawed the Catholic faith.

Peter Faneuil built his fortune on one inherited from his uncle Andrew Faneuil, whose ships traded at ports around the Atlantic Ocean. He prospered in Boston, buying and selling a variety of goods. These, unfortunately, included Atlantic ports in West Africa. There he bought enslaved Africans. These people, forced into chattel slavery, were later sold to work in the Caribbean sugar cane fields. They also became laborers in the city’s businesses and servants in the homes of wealthy Bostonians. 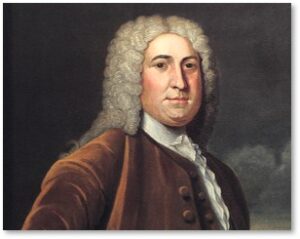 On his own initiative, and “at his Own proper Cost and Charge,” Peter Faneuil used part of his wealth in 1740 to build a market for the citizens of Boston. The painter John Smibert designed the structure. Oddly enough, Bostonians found this proposed gift controversial, so Mr. Faneuil added a town meeting hall on the second floor, above the market stalls.

Thus, both the building and the hall were paid for by a slave trader.

The Cause of Liberty

Fire gutted the structure in 1761 but it was rebuilt bigger and better. When it re-opened in 1763, James Otis dedicated the meeting hall to the “Cause of Liberty.” In the next decade it the Great Hall housed rallies, protests, meetings, funerals, and fiery speeches.

Irony #2: A building paid for by the profits from denying liberty, became a center of ferment for the cause of liberty.

When more people met to plan rebellion than the Great Hall could hold, the meetings moved to the Old South Meeting House. But the hall continued, as Peter Faneuil had decreed, to always be open for public use.

Most visitors stay in the market areas (and restrooms) underneath the Great Hall. But even locals will find a visit upstairs enlightening because of the enormous painting that dominates the west end.

“Webster’s Second Reply to Hayne” by G.P.A. Healy is a massive work that depicts a moment in the second Webster-Hayne Debate of January, 1830. This took place not in Faneuil Hall but on the floor of the Old Senate Chamber in Washington, DC. 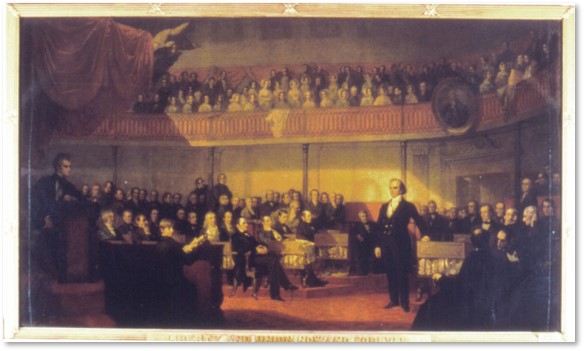 Senator Robert Hayne of South Carolina argued that states could nullify federal laws, which would protect the slave states from any future federal law prohibiting slavery. So, once again, the issue of slavery touched Faneuil Hall.

As the sign beneath the painting explains: “The debate initially began over federal land policy and tariffs on imported goods. As both sides argued, the debate transformed into a larger forum on the role of the United States government.”

Amid all this, Faneuil Hall became a hotbed of abolitionist oratory, although Jefferson Davis also spoke there, delivering a “truly eloquent” defense of slavery.

Irony #3: A structure built with the profits from slave trading became a 19th century center for abolitionist rhetoric. 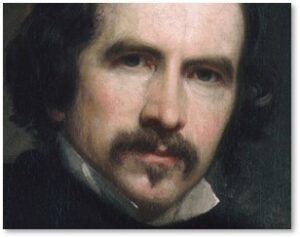 “Portrait of the Artist” by G.P.A. Healy

For the former Corcoran Gallery in Washington, D.C. Mr. Healy painted portraits of all the presidents of the United States from John Quincy Adams to Ulysses Grant. Those works now hang in the National Portrait Gallery’s Hall of Presidential Portraits.

The enormous (16 feet high by 30 feet wide) painting is not a great work of art as it is more concerned with historical accuracy than artistic merit. It memorializes a moment in history with great fidelity to those in attendance. Daniel Webster holds center stage in a beam of sunlight surrounded by attentive senators. The faces of 130 men look on as Senator Webster utters the famous words, “Liberty and Union now and forever, one and inseparable.”

“Webster’s Second Reply to Hayne” is the largest painting in the Great Hall but not the only one. Other portraits of famous men like George Washington and lawyer Rufus Choate line the walls. It is one of the many places in Boston where art, from the modest to the ginormous, hides in plain sight. 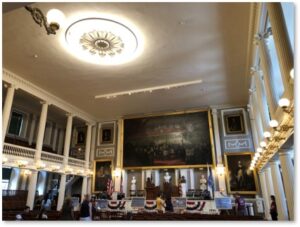 Admission is free and the Great Hall makes an excellent place to rest in an air-conditioned coolness the men who debated here in wool coats could not even imagine. You can take in the numerous works of art and the carved, gilded clock and towering eagle in a peace and quiet not to be found at next-door Quincy Market.

The signage is all very low-key. Faneuil Hall’s Great Hall contains no screens, videos, kiosks, metaverse re-enactments, or sound-and-light exhibits. You read. You look, Then, you read some more. Use your imagination. It works.

Directions to the Painting

Any tour book, pamphlet or web site can tell you how to get to Faneuil Hall. To find “Webster’s Second Reply to Hayne,” walk around to the east side. (That’s the side facing Quincy Market. Go through the center doors and walk up the large staircase. That takes you into the Great Hall and the painting is at the far end. You can’t miss it.

Admission is free. BONUS: There are clean restrooms.