It seems like we recently spent some time in Japan. Not literally, of course, although I would love to visit Japan some day. We saw two movies: Pacific Rim and The Wolverine and in between we caught the Samurai armor exhibit at the Museum of Fine Arts. It turns out that the kaiju (monsters) jaegers (monster machines) of Pacific Rim and the samurai warriors in the @MFA exhibit had design concepts in common. The antique armor is also replicated faithfully in The Wolverine’s Silver Samurai—which is a jaeger of sorts.

First, the movie. Pacific Rim is a big, loud, expensive, over-sized and overpowering monster of a movie that has a simple concept. “As a war between humankind and monstrous sea creatures wages on, a former pilot and a trainee are paired up to drive a seemingly obsolete special weapon in a desperate effort to save the world from the apocalypse.” Well, okay, we’ve seen this before in a variety of settings and with different technologies. So what’s different, unique, unusual, or innovative? In a word: nothing.To say that Pacific Rim is derivative is like saying that Hurricane Katrina was a windstorm. It seems to draw on every movie that’s ever been made about monsters, fighting, oceans, machines, and partnerships. Here’s a partial list: Godzilla, Big O, Transformers, Gundam Wing, Real Steel, The Abyss, The Last Starfighter, and probably a lot of other movies, animé, and manga that I don’t know. 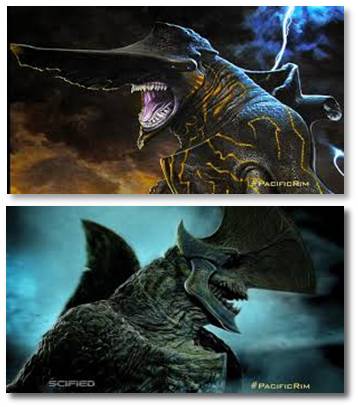 Having built these enormous machines to save the world from equally gigantic threats, one would hope to see more sophisticated weaponry than the jaegers appear to have.

Essentially, they are dropped into the ocean where they duke it out, mano-a-mano so to speak, with the kaiju to save major cities along the Pacific coastline.

The opponents punch and wrestle and occasionally, use a sword, which is a European broadsword, not even a Japanese katana. There was no strategy, just head-on tactical fighting. It was like watching eight-year-old boys smashing action figures together and yelling, “Bam! Pow!”

One-Trick Robots and a Wall

Given that the kaiju evolve continually and present ever-changing—and ever-more-dangerous—threats, it boggles the mind that the only defenses human beings can come up with are one-trick robots and a great big wall. The film’s introduction dismisses the efforts of fighter planes and navy vessels in one sentence but I thought satellite-based weaponry would have been a good idea, along with mine fields, big gun emplacements along the shore, bunker-buster bombs and even suitcase nukes.It says something about how compelling the movie was that I was figuring out better weaponry and listing the movies they borrowed from while I was watching it. Still, the kaiju were big and scary—made of genetic code taken from a variety of sea creatures, mixed together and blown up to skyscraper size.

Then we saw the exhibit of Samurai armor @MFA, from the Ann and Gabriel Barbier-Mueller collection. It includes more than 140 objects including elaborate equipment for men, tack for horses, clothing, and some weaponry. The armor is made from a variety of materials, and was crafted by teams of artisans including metal workers, stencil dyers, cord makers and lacquer artists. I saw some of the kaiju forms in the exhibit’s helmets and face masks. It was an odd juxtaposition but it’s nice to know that the movie’s monster makers did their historical research. The exhibit is excellent and was crowded on a Sunday afternoon as folks like us got in before it closes. 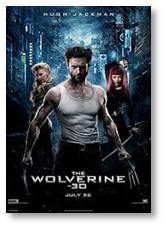 Next we saw The Wolverine with Hugh Jackman reprising his role as the mutant with a metallic skeleton, retractable claws, and a set of unbelievable abs. Most of the movie takes place in Japan, beginning with Logan in a WWII prison camp just as the B-29 Superfortress Bockscar flies in to drop Fat Man on Nagasaki.

This provided another interesting connection–to the book Unbroken by Laura Hillenbrand, which we just listened to on audio book for my book group. Unbroken deals with the WWII capture and imprisonment of Olympic miler Louis Zamperini in Japan and describes the impact of the B-29 on the war–as well as the psychological impact on the POWs.

Back to the Future for Logan

That scene sets up the movie’s plot for its 21st-century action, which re-unites Logan with the prison guard whose life he saves from the A-bomb. @Wolverinemovie is a much better film than Pacific Rim, and an improvement over Mr. Jackman’s last outing in that role. I’m not sure if you can call Logan a superhero, exactly, as he’s more like an anti-hero. He wears grunge and lives in a cave while one villain sports spandex outfits, when she isn’t shedding her skin. The other villain, a billionaire, wears the Silver Samurai armor, which is a bigger, badder and shinier version of the equipment we saw at the MFA.We enjoyed The Wolverine and I recommend it for people who like that genre of movies. See it in 3-D and stay for credits to see the preview of the next X-Men film, Days of Future Past. As for the samurai armor, it’s part of the Ann and Gabriel Barbier-Muller collection that is housed in a museum of its own in Dallas.