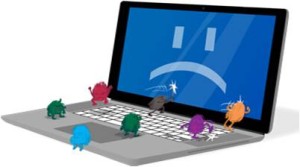 Over the past few weeks, my computer has been slowing down and showing symptoms of infection by viruses and other malware. Although I usually maintain good computer hygiene and don’t click on unknown URLs or respond to emails from Nigerian princes I must have opened an online Pandora’s Box somehow. My laptop clearly needed some expert attention.

As I’m very busy—and use my computer for almost everything—I was reluctant to bring it in. When was I going to find the time to live without my everyday lifeline to online everything so that I could get it fixed?

But Friday morning proved to be the final insult. Pop-ups appeared and continually re-appeared despite my efforts to get rid of them. I could no longer deny that my laptop had e-Bola and needed serious help. We were going to be running errands in the vicinity of the PC Exchange in Framingham so I unplugged my laptop, stuffed it into a computer bag and hauled it off.

When we left the store, I felt like I had abandoned a pet at a shelter that puts unwanted cats and dogs to sleep. I knew that it would come back to me in much better health than I left it but without my trusty laptop I felt untethered and disconnected. My portal to the internet of everything was gone.

I thought cleaning the machine would take a couple of days, while secretly hoping the work would be done by the end of the day. No such luck. The security programs didn’t stop running until Tuesday afternoon—at which point I was babysitting far away from the store. I didn’t get to pick up my computer until Wednesday morning.

What was it like having to rely on my phone for email and other online activity? Not great but my new iPhone 6 was up to that task. What proved to be really difficult was not being able to write for nearly a week because I had a bad case of online writer’s block.

I write every day. Three to five times a week I write a post for this blog. When I’m done with those I write short stories and chapters of the novel I’ve been trying to finish for far too long. I put thumbnail book reviews up on a Facebook group called Book I’ve Read or Books You Have Read. I write critiques of works by other members of the Spacecrafts Writers Group in advance of our monthly meetings. Ideas come into my head and I write them down. All the time. 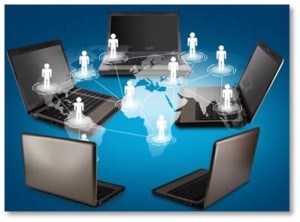 In addition, I have a mental relationship with the folks who read what I write. I like to think that people look for my next post to appear on The Next Phase blog as well as for the Facebook, LinkedIn and Twitter feeds that I use to drive traffic to the site.

This relationship might only exist in my head but I know that other members of the Facebook group “Books I’ve Read or Books You Have Read” enjoy my thumbnail reviews and use them as guidance on books to read or avoid. People comment both on my blog posts and on Facebook. They Friend me. People re-tweet my tweets and follow me on Twitter. I’m LinkedIn to nearly 800 people–all of whom I have met or worked with.I enjoy that social media interaction and look forward to it.

When I didn’t have access to those online sources and my online audience, I had a panic attack. I was out of touch if not offline. I found myself short-tempered and bristling with unspent energy. I didn’t have writer’s block, I was blocked from writing. It felt like a free-flowing stream had been dammed up and was putting a lot of pressure on a dam not meant to hold that much volume. It felt like drinking five cups of espresso and then trying to meditate. Couldn’t do it.

Plus, I had a lot of time on my hands. Time that I usually spend writing stretched ahead of me. With only so much housework to do I found myself tackling jobs I had been postponing, like re-packing the Christmas decorations and cleaning off the ping-pong table in the basement. This work gave me an outlet for my nervous energy and my frustration. Anything to keep moving and keep busy. Anything to keep my brain occupied when it could be engaged in writing.

Couldn’t I have just done it the old-fashioned way, with pen and paper?  Sure I could. When I was in Alaska I last summer I wrote a whole psychological horror story called “Sylvia and Silverbell.” scribbling in one of those black-and-white speckled composition books with a ballpoint pen whenever I had a few moments to spare. The finished story came in at 5,700 words and it’s currently out for review by a magazine. With luck someone will like it and the story will join my fiction that has actually been published. 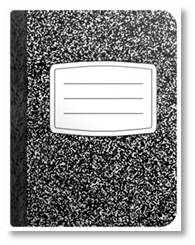 This method is certainly not ideal, though, and it’s much slower than typing on a keyboard. Not to mention related processes such as editing in Word, researching subjects on the internet, and using Duotrope to find publications that would be a good match for the unpublished stories in my collection.

I had no idea that I would feel this strongly about being separated from my best writing tool and from the internet of everything that connects me to the broader outside world. Logically it seemed that I could see it as a vacation, as I do on Sundays when I stay away from my desk so we can take off and go to a museum, a craft show, or other activity. As lots of people can attest, however, taking a vacation is a lot different from being out of work. Free time is precious when there’s not much of it but too much free time is a burden. Too much nervous energy combined with too much free time is a difficult combination to handle.

Now that my laptop is once again in its place on my desk in the loft of our condominium, I’m back in business. I can write again. (Phew!) I can go online again. (Yes!) I can communicate with the people in my ecosphere (Hi!) And I can do the other things I enjoy doing on my computer, such as working on the web site of my Spacecrafts writing group, working on the internal website of the First Parish of Sudbury, publishing some of my past blog posts on LinkedIn, and commenting on articles in The Wall Street Journal and the Boston Globe.

The dam has been breached and I can breathe again. It feels great!