Visitors entering the Fairmont Copley Plaza Hotel’s main entrance on St. James Avenue pass by two large, gilded lions guarding the door. These distinctive lions were adopted by the former Copley Plaza hotel as their logo. But they did not start their hotel career here, nor were they always golden. Also, there used to be three of them.

The “Kensington Lions” originally lived nearby on Boylston Street, west of the Old South Church and directly across from the Boston Public Library’s McKim Building. Here, on the corner of Exeter Street, stood the Hotel Kensington, an apartment hotel built by Henry Bigelow Williams at a cost of about $200,000.

The Kensington opened in 1884, over a decade earlier than the library. It stood seven stories high and held two suites of apartments on every floor. The apartments, which were designed for families, had 10 rooms, each with a fireplace. This grand structure claimed to be one of the best private residences in the city. 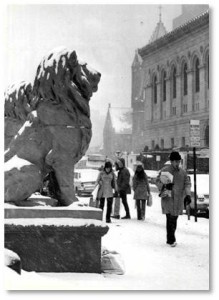 The Kings of the Jungle on a cold winter day

The lions, created by Boston sculptor and painter Alexander Pope Jr., came to flank the front door in 1899 and remained in place for nearly 70 years. A third lion prowled the roof above the front door. The two seated beasts stood six and a half feet high.

Mr. Pope modeled them on a pair of African lions, using a real lion named Wallace who resided in the old Boston Zoo. The sculptor cast them in cement, which was then colored to match the brownstone of the building.

Born in Dorchester, MA, Alexander Pope Jr. (1849-1924) sketched and modeled animals before going to work in his family’s lumber business. He later studied with William Rimmer before specializing in paintings, sculptures (two of which were purchased by Czar Alexander III), and lithographs of animals as well as animal portraits. He painted many works in the trompe l’oeil, or fool-the-eye, style which makes the subjects look like real objects.

Moving to the Copley Plaza 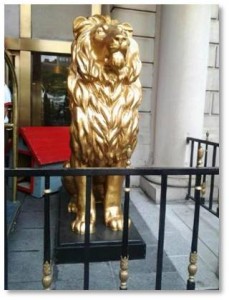 The lions remained in place until the Kensington Hotel was demolished in 1967 to make way for a parking lot. Later, One Exeter Plaza, filled the space. Wags nicknamed this modern office building the “Darth Vader Building” for its height, dark glass façade and Mansard roof.

The two street-level lions moved to their current position outside what was then the Copley Plaza hotel on St. James Avenue. The rooftop lion had been removed at an early date. He disappeared and his whereabouts are still unknown.

The Copley Plaza was designed in 1910 by Blackall & Hardenbergh and opened in 1912. Its Renaissance Revival style and rusticated granite façade match that of the Boston Public Library’s original McKim Building. Ironically, this hotel replaced the old Museum of Fine Arts, which was designed by Sturgis and Brigham in an elaborate style purportedly inspired by London’s South Kensington Museum (now the Victoria and Albert Museum). So, in a sense, the lions went from one Kensington design to another, doubly earning their name. 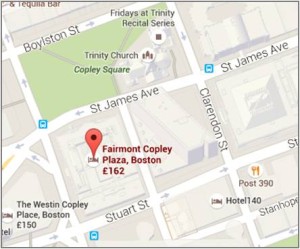