Skip to primary content
Skip to secondary content
I thought I would follow up on yesterday’s post on carry-ons that kill with this additional information about traveling safely on the airlines.  Although it’s common to feel helpless in a plane because we depend on the pilot and crew to get the equipment from starting point to destination in one piece, there are actually many things we can do to tip the odds in our favor when flying.  Airplanes are one of the safest ways to travel but it never hurts to take charge of the things you can control.  The world is not Disneyland.  Accidents happen and the unexpected may get thrown in your face.  There’s a physiological tendency to freeze in a catastrophe and the human brain performs sluggishly under stress.  Here’s a compendium of advice from a variety of sources with a little of my own experience from years of air travel thrown in.

Where You Sit Matters 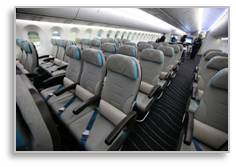 Sit as close to an exit as possible.  Professor Ed Galea of the University of Greenwich has spent more than 25 years analyzing how humans react in emergencies.  He notes that survivors move an average of five rows before exiting a burning plane safely. Seats in the rear of the plane and aisle seats are also safer.  This makes sense because you can move faster if no one is blocking your way.  The airlines are not making this easier, though.  @WSJ reports that airlines routinely block coach seats, reducing the pool of available seats to reserve free of charge.  They do this to pressure you to pay for a reserved seat or to provide them to elite travelers.  Advice:  Book an aisle seat as close to an exit as you can.  If you aren’t an Elite passenger, you can either pay the fee or wait until 24 hours before the flight, when more seats become available.

How You Dress Matters 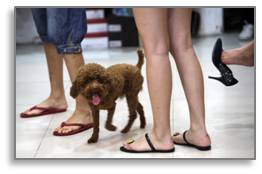 When I see people traveling in shorts and flip-flops, stiletto heels and tight skirts, I just shake my head.  Yes, those clothes are comfy or fashionable but they won’t help you if you’re in danger.  The NTSB reports that 68% of passengers killed in plane accidents died as a result of injuries sustained during post-crash fires. Flip-flops and Manolo Blahniks won’t get you through burning jet fuel very well.

Advice: Wear long pants, long sleeves, and tie-on shoes.  Yes, the shoes are a pain during the security screen and George Clooney wore loafers in Up in the Air, but you won’t run out of them if you have to move fast.

Pay Attention to the Safety Guidelines

Most people, especially frequent travelers, ignore this instruction because (A) they have heard the drill so many times before, (B) they think they won’t survive a crash anyway and (C) the airlines make the briefing as boring and uninformative as possible.  They don’t want to alarm passengers by pointing out the possibility of a crash, which is why they are issuing the instructions in the first place.  That’s like showing you where the brake is in your car without mentioning that you might need it to stop the automobile. 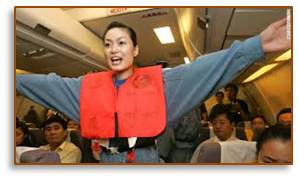 Advice:Watch the attendant or the video and notice where the nearest exit is to your seat and whether it’s on your side of the plane.  Then count the number of seats between you and the exit.  In a fire, smoke will close your eyes reflexively and you won’t be able to open them.  If you can count the seats, you can make it to the exit with your eyes closed.

Stay Awake at Takeoff and Landing

ABC President Ben Sherwood, author of The Survivors Club — The Secrets and Science That Could Save Your Life says that 80% of all plane crashes happen within the first three minutes of takeoff or in the eight minutes before landing.  Yet those are exactly the times when many people are tuned into their headsets or sleeping.  The Plus Three, Minus Eight Rule means you should stay awake and alert at those times. 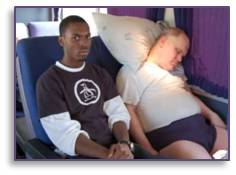 Keep all your senses open because what you see or smell may be as important as what you hear. My father once smelled the distinctive scent of burning wires during flight.  He called the flight attendant over and told her in a low voice that he was an electrical engineer and he knew what that meant.  She went (quietly) into the cockpit and some people moved (quietly) to and fro for a while.  When the passengers got off the plane, the attendant thanked him and gave him a bottle of wine.  He never knew what had happened but everyone got to their destination safely.

Advice:  When the pilot says the plane is preparing to land, put your shoes on and make sure your seatbelt is on and pulled tight.  Take out your earbuds and put away your computer, iPad or any other distractions.  Look around you.  Remember where the nearest exit is located.  Listen for the bump of the landing gear coming down and any instructions on the intercom.  Stay alert.

Get Ready to Move

As Brad Pitt says in World War Z, “Movement is life.” In a crash, don’t wait for the flight attendant to tell you what to do.  Don’t collect your things.  Don’t release your seatbelt until the plane is stopped.  Then move!  Head for the nearest exit.  You may see people who are sitting normally and appear to not notice the plane has crashed.  If they are in your way, slap them and order them to move.  (Flight attendants are trained to do this.)  If they are not in your way, keep going.  You have 90 seconds to get out so don’t dawdle or play the hero. 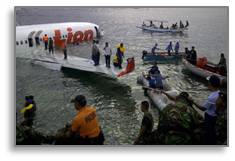 Do I do these things when I fly?  You betcha.  Every time.  As any Boy Scout can tell you, Be Prepared.  People who accept the possibility that a problem may occur and people who are prepared to deal with a problem are far more likely to survive it.  Veterans and people in the military are good responders because they have been trained to handle an emergency.  Passengers who think their flight is as safe as Space Mountain are unprepared for anything out of the ordinary and will freeze in their seats or panic.  We all watch disaster movies and think we would be one of the survivors.  We would be among the few smart people who would run away from the tsunami, stay ahead of the zombies, make it to the life raft, find the exit, stay out of the elevator, do whatever it takes.  Reality is a different story: most people aren’t prepared for even minor accidents.  Be prepared and you’ll increase your chance of survival considerably.BTW:  I do one more thing after noting the nearest exit, counting the seats, and fastening my seat belt.  I close my eyes and envision a bright white light enclosing the plane.  It starts at the nose, covers the fuselage and the wings, envelops the landing gear and then extends to the tail.  When I’m done, the whole plane is held in a bubble of white light.  Some people might call it praying; some might call it setting expectations; some might call it wishful thinking.  Does it work?  All I know is that I have been in conversations where colleagues talked about locked landing gear, coming in on a foamed runway, watching the fire trucks roar out to meet them, etc.  I have nothing to say because I have never had that kind of experience.  And that’s the way I like it.