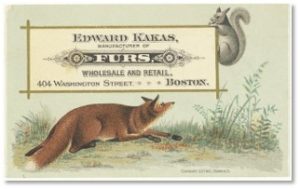 Anyone who lived in or around the Back Bay prior to 1997 could tell you where to find a polar bear. All you had to do was walk past 93 Newbury Street and look in the front door. Rearing up at the back of the Edward Kakas Fur Company store was a full-size, stuffed, (taxidermy, not Steiff) polar bear. With one paw raised, he appeared to wave at customers and passers-by alike.

I said a mental hello to the impressive creature whenever I passed. As a co-op student at Northeastern University, however, I never entered the store. Besides having no money for a fur coat I held (and still do) a believe that killing animals for fashion is immoral. So, I never got closer to him than the sidewalk.

The building that housed the Edward Kakas & Son Fur Company was designed by Frederic Pope (an architect with a somewhat shady reputation) but is not listed among his other work. It was built for Boston businessman and philanthropist Eben Jordan in 1872. 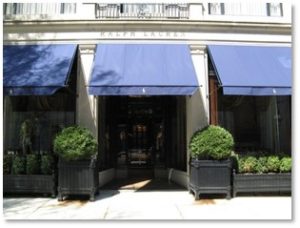 The Edward F. Kakas & Sons fur company, a family-owned business, was founded in 1852. The company, which formerly did business at 179 Tremont Street across from Boston Common, and on Boylston Street, occupied the building for many years.

The company added the store front in 1925 and chiseled the its name over the door. George Kakas ran the company along with his two sons, Edward F. and George.

In 1997 the Kakas Fur Company left its swanky location among other luxury shops on Newbury Street and moved to the Crosstown Section of Roxbury—a decidedly down-scale setting. It no longer appears to do business as a retail store but sells through Saks Fifth Avenue. Kakas inventory items appears on sites like Etsy and eBay.

What Happened to the Bear?

But I was less interested in the company than in that polar bear. Did he have a name? Was he sold with the building? Where is he now?

My online research went into a rat hole because of a famous murder. The store’s former manager, who I will not name, stole a gun from the safe and used it to kill his wife. If you want more information on any of that, use Google. The stories and images will come up thick and fast and I do not wish to deal with them here. Those stories overwhelmed other results. Some mention the polar bear but but provide no information. 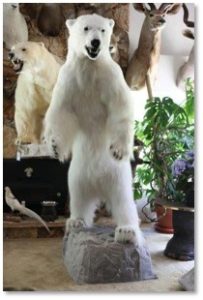 A mounted polar bear (not the Kakas bear)

I went through my library of books on Boston history but found nothing. Reaching out to other sources, I called places that seemed like logical destinations for a seven-foot polar bear. Unfortunately, the bear’s new residence—if any—remains a mystery.

I did not take any pictures of the polar bear with my little Kodak camera all those years ago and I have not been able to find a single photo on the internet. In fact, it amazes me that so few photos of the Kakas Fur Company, not related to the crime, exist anywhere.

The Back Bay Bear is Missing

I would love to hear from anyone who has information on the Kakas bear, or who has a photo of him somewhere. Was he sold? Auctioned off? Donated? Please let me know in the Comments sections. If any of my sources provide more information, I’ll write a follow-up post.