This is the second post in my series on hidden gems of Boston: places that are hidden or largely unknown that ordinary folks can visit. 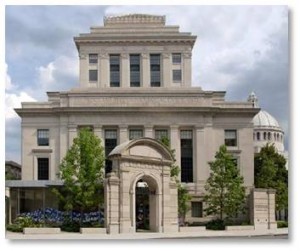 The Mary Baker Eddy Library at the Christian Science Headquarters

Today we’re moving from @MFABoston’s Japanese garden to an extraordinary room that’s not far away.

If you have ever wanted see the whole world at once, the place to go is the Mapparium. This unique and brilliant jewel of a room is located in the Mary Baker Eddy Library at the Christian Science Publishing Society’s headquarters on Massachusetts Avenue.

The World From Inside

The Mapparium is an enormous stained glass globe that’s 30 feet wide and three stories tall. You walk through it on a glass bridge that gives you at 360° view from the center of the earth looking outwards. It was built 80 years ago by Boston Architect Chester Lindsay Churchill for the Christian Science Monitor, inspired by the gigantic spinning globe inside the New York Daily News building in Manhattan. It was designed to symbolize “the international character and world-consciousness of the Publishing Society’s activities.” 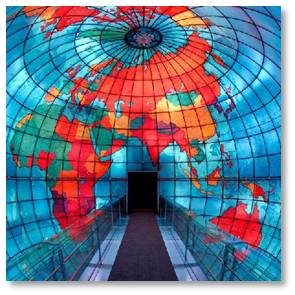 The world from inside

This extraordinary room took three years to create and was built by Old World craftsmen who were refugees from Nazi Germany. #Mapparium opened on May 31, 1935. It cost $35,000—about $613,315 in today’s money.The Mapparium’s bronze framework holds over 600 concave stained glass panels in brilliant colors. Electric clocks ring the equator, providing times around the world. You cross the hollow sphere on the glass bridge, coming in from the Indian Ocean and exiting through the South Pacific.

Because the viewer is looking at the world from the inside out, we can see the earth’s surface “from pole to pole” without distortion, as our eye is the same distance from every point. Accustomed as we are to viewing the world on maps and globes we can be surprised by how different it all looks when we see the whole surface at one time.

Don’t look for up-to-date country borders, though. The Mapparium hasn’t changed since 1935 so the enormous continent of Africa is still broken up into numerous European colonies. There’s no Indonesia, Israel, Vietnam, or Burkina Faso and the USSR is intact in its orange enormity. Although Mr. Churchill designed the glass panels so they could be replaced as political boundaries changed, it has been preserved in its original state as a work of art and history. 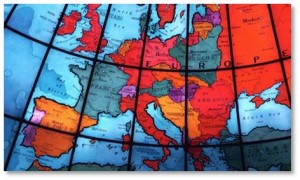 Europe from the glass bridge

The Mapparium’s stained glass walls in vivid colors is backlit by 206 LED light fixtures that can be programmed to produce up to 16 million colors during a seven-minute, computer-controlled, sound-and-light presentation that illustrates how ideas and geography have changed over time. The lights can be used to shift the viewer’s attention from landforms and geopolitics to the world’s oceans, for example.

Like the rotunda of the United States Capitol, the Mapparium is a “whispering gallery.”  Its shape makes for an acoustical anomaly. If you whisper at one end, someone on the other end of the bridge can hear you just as if you were speaking in a normal voice. That means a whisper near Greenland can be heard distinctly in Australia. Voices in the center of the bridge, however, are much louder than normal. This occurs because the Mapparium’s curved glass walls do not absorb the sound waves, instead reflecting them back to the speaker.

As the room is almost completely spherical, sound that originates near the center of the sphere returns to the source while sound waves that start off-center travel around the sphere and arrive at the opposite end simultaneously.

An associated exhibit uses letters, documents, and artifacts to demonstrate the construction, history, and significance of the Mapparium, which is truly a three-dimensional, walk-through artistic achievement that’s hidden inside a library.

Directions to the Mapparium

You can find the Mapparium quite easily. It’s near the intersection of Huntington and Massachusetts Avenues and there’s plenty of parking, particularly in the Prudential Center Garage.

It’s open from Tuesday through Sunday from 10:00 a.m. to 4:00 p.m. There is a small admission fee for the Mapparium and the associate Quest Gallery although all other space in @MBELibrary are free.