I went out into the backyard this morning to hang a bird feeder in the trees near the stone wall and chuckled at the flag still flying over the first hole at Charter Oak Golf Course. This fall was so long and so beautiful, so filled with warm sunny days, that folks were playing golf until December. I expected the maintenance crew to pull down the flag after Thanksgiving but that didn’t happen. Were they gambling that we’d have a long, green winter with lots of winter golf? 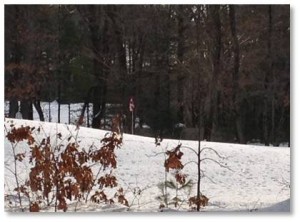 They lost that bet as a frigid air mass and two big storms set in right after the holiday. With about 18 inches of snow on the ground before yesterday’s thaw began, the likelihood of winter golf seemed pretty slim. Still, the flag flies on.

How exactly does one hit the ball out of a snow bunker? That’s assuming you can even find the ball once it’s off the tee.

Tracks in the Snow

On my way to the tree where the bird feeder hangs, I checked out the animal tracks in the snow. It was clear that something had been up there, breaking through the crust and leaving a wake that was visible from my bedroom window. 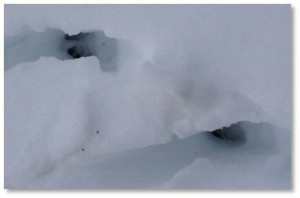 The deer tracks were clear enough, wandering through the snow and speeding up into a run at one point.

What puzzled me, though, was a set of tracks I couldn’t identify. It’s not that I’m an expert tracker by any means, but I know deer, squirrel, rabbit, and wild turkey when I see them. 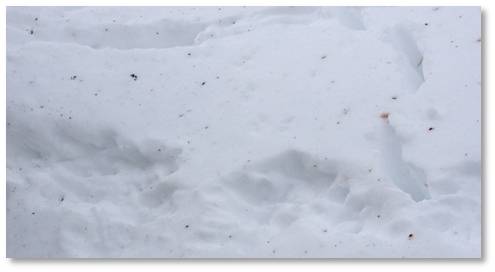 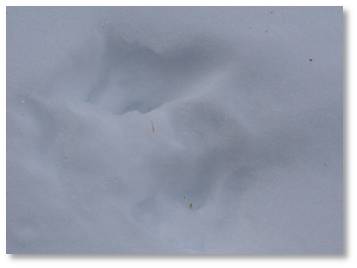 What the heck is this? These tracks were grouped under my neighbor’s bird feeder and then went up the snow that had drifted on a tree trunk. They’re about as big as my hand.

Yankee magazine’s animal track identification chart didn’t help: none of the tracks it showed looked anything like these. Neither did the New Hampshire Fish & Game Department’s track chart. I did send these pictures to the staff at NH Fish & Game and I’m hoping they can help. L.L. Bean’s track chart indicated that the snowshoe hare would be a possibility but the tracks went up to a tree and seemed to stop there. Hares don’t climb trees so I’m still puzzled. If you have any ideas, please let me know.

The weather forecasters say the thaw will continue over the weekend and there might not be any snow left for a white Christmas. I’m hoping that doesn’t happen. But if it does, the golfers could be back.