Throughout history, the bending of the knee has symbolized honor, respect and humility. People have been genuflecting before kings, queens, and religious leaders for centuries and in the Christian faith, kneeling is associated with praying or supplication.   Even loyal Game of Thrones followers know that to “bend the knee” is the ultimate gesture of allegiance. 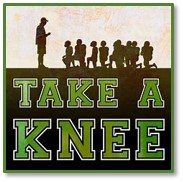 It has also been used as a passive gesture of protest, as Martin Luther King demonstrated in 1965 when he took a knee to lead a prayer during a protest in Selma Alabama. He was joined by civil rights marchers protesting for the right to vote, and they knelt in unison before being arrested for parading without a permit. Take a Knee has a backstory that predates its athletic ties.

The New Significance of an Old Tradition

By the early 1980s, the request to “take a knee” was a common one in sports teams.  Players would kneel for group prayer, to hear directives from the coach, or to show team solidarity. 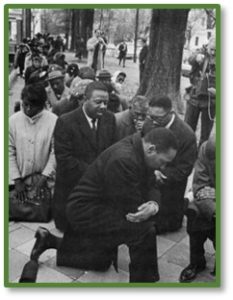 The expression reflected the coach’s request to take a break and listen. It also referred to actions on the playing field. Quarterbacks would kneel if their team had a slim lead at the end of the game. By dropping to one knee they would end the play, run down the clock and avoid a fumble or interception.

So, when did taking a knee become a moral offense and an act of disrespect?

It began in early 2016 when football player Colin Kaepernick chose to sit on the bench during the playing of the National Anthem to protest police brutality. No one commented until several games later, when he was joined by team mate Eric Reid and together they took a knee.

Take a Knee: Tell Me More

Reid and Kaepernick wanted to use their platform as athletes to make an impact on the social justice movement. After lengthy debate and a meeting with a former player and Viet Nam veteran, they chose to kneel rather than sit, deeming it a more respectful gesture of protest.

The veteran in question, Nate Boyer, wrote to Kaepernick expressing his frustration at the form of protest Colin chose. Boyer suggested that they take a knee as an alternative, indicating it was also a military tradition honoring fallen soldiers. Kaepernick and Reid liked the idea because it recognized men and women who died fighting for injustices and Americans’ rights to dissent.

At the next game they took a knee to peacefully protest prejudices that fell short of the symbolism of the flag and the national anthem.

During the past year, the gesture has become a radical expression used by football players signifying solidarity against racial inequality and police brutality. It has gained additional momentum in response to Donald Trump’s attacks on the protesting players and his demands that they be fired.

The gesture’s passive origins have been replaced by the perception that it is an act of defiance and disrespect. It has been hashtagged on social media as #TakeAKnee, #TakeTheKnee and #StandForOurAnthem.

Kaepernick’s knee triggered a chain of events that started a nationwide movement. He was called unpatriotic, ungrateful, and disrespectful by some. Others call him a hero.   He was voted the most disliked player in the NFL.

A Tale of Two Athletes

Then there’s Heisman trophy winner Tim Tebow. Home-schooled by Christian parents, he spent summers supporting his father’s missionary work and is outspoken about his pro-life stance and no sex before marriage. He is also a card-carrying member of the Fellowship of Christian Athletes. 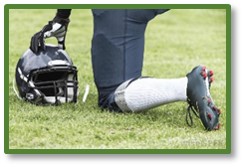 But he is most well-known for his signature move on the football field, known as Tebowing, the practice of dropping to one knee on the field, with his head bowed in prayer. He was never protesting anything; he was simply acknowledging his faith. The media—especially ESPN—skewered him, and even the NFL failed to support him.

Both Tebow and Kaepernick were football players known for kneeling on the field, although for very different reasons. Neither escaped media criticism for their beliefs and neither plays football today.

One Man’s Ceiling is Another Man’s Floor

Their gestures created a lasting impression and, whether you are offended or not, the media momentum is a reminder of our Constitution and the laws that our flag and national anthem embody. They are the same laws that grant you and me permission to have opinions that are different and to express them in non-violent ways.

You do not have to wear a uniform to be a patriot or to protest. Free speech and the right to dissent are central to Americans’ freedoms. Your salary—as a football player or anyone else—does not regulate that freedom. 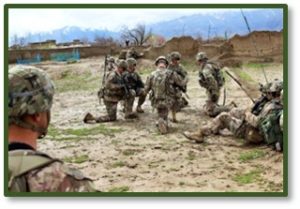 And that brings me to the men and women who fight to protect our freedom. Protests like the ones in the NFL have become veterans’ issues that were never veterans’ issues to begin with. Kneeling has never been disrespectful in the U.S. Armed Forces and it doesn’t make sense to make it so now.

I respect the military. I am the child of two veterans whose professional duty was to fight for and defend the Constitution of the United States. Members of the military are as diverse in their ideas, beliefs and political affiliations as the country we live in. They are not of one mind and it is unfair to say taking a knee disrespects them or dishonors their service.

A Chance to (Re) Consider

Veteran military journalist Thomas E. Ricks said the tradition of “taking a knee” is something to admire and emulate. It provides an opportunity to pause, step back, gather one’s thoughts and reconsider a given situation.

Change happens, but it doesn’t happen silently or by itself. However you chose to view it, taking a knee suggests a time for contemplation and offers a visible reminder that you and I enjoy freedoms still denied to many.