Growing up I did not like my name and swore I’d change it as soon as I could. To me it felt plain and ordinary; but it was actually uncommon for the year I was born. Even the Social Security Administration agrees it wasn’t a popular name. Mary, Linda, Patricia, and of course Elizabeth and Debbie (for their actress counterparts) were trending back then. 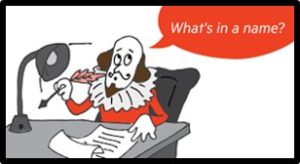 Other people didn’t appreciate it either, calling me Susan, Sue, Susannah and of course Susie, Suzy, and Suzie. Additionally, my name is not spelled with the more common ‘z’ but the softer ‘s.’ Totally uncool when you want uber-coolness in your angst-ridden pre-teen life.

By the time I was in third grade I decided to call myself Michelle. I even asked my teacher, Mrs. Aronsberger, to call me by my newly conferred and so much cooler new name. She declined; failing to understand my identity crisis. I embroidered my new name on a sweatshirt and wore it for a few years, but everyone still called me Susanne.

Years passed, maturity came, and eventually I forgot all this nonsense and learned to love my name.

What’s in A Name?

Our names affect how people perceive us and how we perceive ourselves. It might seem cool to give your kid a unique name, but that uniqueness comes with many more disadvantages than advantages.

Your name is the biggest representation of who you are.  People associate names with personality traits, ethnic backgrounds, intelligence and the ability to succeed. If you doubt the impact of this statement, look up Barack Hussein Obama.

Having a name that is easy to pronounce and remember makes you easier to find. This becomes important when you enter the job market.

In a Marquette University study researchers found evidence to suggest that names viewed as the least unique were more likable and people with common names were more likely to be hired. According to The Atlantic, in male-dominated fields such as engineering and law, women with gender-neutral names had a bit of an edge for success.

But the impact of your name begins long before you enter the workforce. It begins at birth.  Someone else chooses our names; indicators that speak to the ethnic origin, social standing and education of our parents. From privilege and entitlement, to how we are treated and ultimately judged, your name is a major influencer and may in turn influence your own life choices. 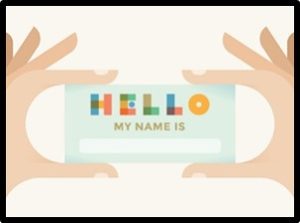 The Romans had the expression nomen est omen, or name is destiny.

A trendy name was not going to fix my perceived lack of elegance, though at the time I believed it was all I needed to become popular. I was not born with confidence—I was smart but socially awkward. I wanted to be a cheerleader; I ended up on the student council. Athleticism and I never learned to like each other and in high school I gave it up for the library club and a love of books that has never left me.

When I was in junior high I confronted my mom with her unfortunate naming choice and asked why in the world they chose Susanne. Her answer surprised me. My name is French and means Lily. It is actually a truncated form of the Biblical name Susannah (Σουσαννα). Susanna occurs only once in the Bible, in Luke 8:3, where she is mentioned among the women who minister to Jesus.

Even more importantly, a Catholic Saints Name is a hard and fast rule of child naming when you are born to Catholic parents who did not disagree with any of the church’s edicts. My parents drew their inspiration from the Church of St. Susanna in Rome and the French town of Sainte-Suzanne-et-Chammes with a church of the same name.  They kept the ‘s’ in my name and dropped the ‘a’ in favor of an ‘e.’ And there you have it. Suddenly my name meant something; it was unique to me. 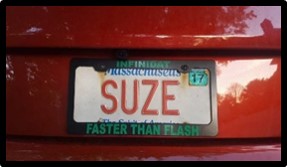 Eventually I grew into my name and realized we were a good match. I am definitely not a Michelle! When I read that your name and personality can be related I did an online search. The characteristics of someone with my name yielded the following mostly accurate observation:

You are spiritually intense and can sting or charm. Your name brings love and new starts into life and attracts money. In business, you are the creator and promoter of original ideas and usually enjoy considerable financial success.

Emergencies raise your intuitive abilities in order to resolve a conflict or situation. You become very creative under pressure and have original ideas.  You are always looking for a chance to do your own thing, to be your own person, and to have things done your own way.

I took a few liberties with my given name, as you can see from my license plate. Back then, a vanity plate request was a paper application to the RMV, listing five choices. I knew the more mainstream diminutives of my name would be taken; Suze is the one they assigned me, and for over 30 years its stuck. Once a year I pay $80 to keep it. That’s how much I love my name.

The popularity of names will come and go, often trending with current book and movie characters or quirky parents like Frank Zappa, who named his kids Moon Unit, Dweezil, Ahmet Emuukha Rodan and Diva Thin Muffin. I count my blessings.

Parents today can give their children whatever names they want but would be wise to remember that names have consequences. A name does not guarantee happiness or success, but it can make life a little easier.