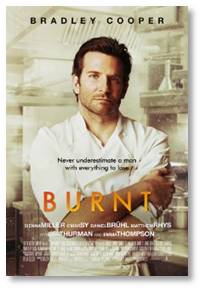 I knew Burnt had gotten only tepid reviews—29% Rotten on Rotten Tomatoes. But 61% of the fan reviews Liked it. Hmmm. The sun was setting early and I was really tired from the previous day. It was grounds cleanup at our church and I had worked for four hours on a variety of tasks. The First Parish of Sudbury is built on a hill so almost anything we do involves going up and down—a lot.

A movie sounded like a good way to relax and forget about the sun setting before 5:00 p.m. for the first time since last winter. And I like movies about food so I was willing to take a chance on this one despite the critics turning up their respective noses at it.

I’m glad we did. Like many films in this genre, @BurntMovie is less about food than it is about the life journey of a chef who works with food every day. Food is his life, his passion, and his expertise. But the film is about him.

All Food, All the Time 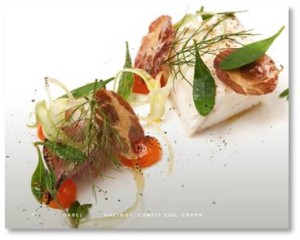 Halibut, confit egg, coppa from Adam Jones at the Langham

That said, we get plenty of shots of fish being filleted, oysters being shucked, sides of meat being broken down, and eggs being scrambled, among other things.

We see beautiful meals presented with the kind of precious plating that has been so in fashion—a piece of fish the size of a domino, a single mushroom here, an edible flower there and five pointillist dots of sauce. Whether in prep or presentation, there’s plenty of food on view for lovers of both cooking and eating.

The chef’s journey in Burnt is one the audience is familiar with: a rising star, he overdid drugs, alcohol and sex until he finally ruined his own life along with the lives of people he respected. To atone, he shucks a million oysters and then sets out to redeem himself by pursuing a third Michelin star. Adam Jones, played by Bradley Cooper, is not a likeable guy. Having banished the demons of addiction, he turns out to be what those of us who don’t work in the kitchens of high-end restaurants would consider a bully.

Chef Marcus Wareing of Marcus, a London restaurant with two Michelin stars, consulted on the culinary aspects of Burnt and was interviewed by Christina Chaey of Bon Appétit. He commented, “I had to show him how to ‘give them a good bollocking,’ as they say, and really go to town on the team. That was a really difficult thing to do because I had to do it my way, and it’s not pleasant, but you have to go and get in everyone’s face, pick fault, and just go for it.” 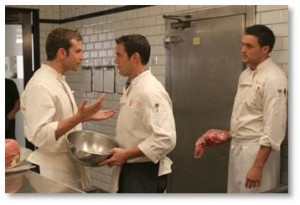 Okay, I know from watching Gordon Ramsay that top kitchens are based on a military model with the executive chef as drill sergeant. I understand that absorbing this kind of abuse is de rigeur in a kitchen that aspires to even one Michelin star. But I used to work for a man who threw his anger around like plates of “imperfect” food and I know first hand that fear and intimidation are not the best motivators of excellence. I also doubt that a human dynamic this fundamental changes from the technology industry to the culinary world.

I also don’t confuse tantrums with good management technique. When Adam Jones’s protégé picks up his bad habits and takes her own frustration out on other members of the kitchen staff, it illustrates what happens when the man at the top—whether it’s Steve Jobs, Gordon Ramsay or Adam Jones—demonstrates immature behavior and anger management issues. It rolls downhill.

Still those emotional upheavals are part of the haute cuisine world and thus are involved in the protagonist’s journey. I liked seeing the kitchen staff of a place like “Adam Jones at the Langham” working as a team. Far too often, movies about food show a nearly empty kitchen, as in Waitress, or a clueless cook poking ineffectually at the food he’s clearly never before seen in a raw state.

Burnt did not fall into this trap.

As a result Burnt delivers that level of authenticity often missing from movies about food. As Mr. Cooper says, “There was no stunt double. There was no insert of another person’s hands.” What you see the chefs do in Burnt is pretty much the real deal.

We both enjoyed Burnt and thought it deserved better than the warm dishwater reviews given to it by the critics. If you like interesting movies that show you the inside scoop on an unfamiliar industry or talent, you’ll enjoy it, too. Forget the critics and ignore that ugly green squish on Rotten Tomatoes. Go see Burnt and you’ll have a good time.