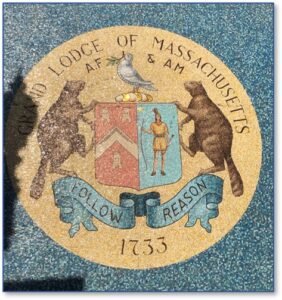 Animals of all kinds decorate Boston’s buildings, whether they are carved, painted, or sculpted. Eagles and lions predominate, although the city likes horses and dogs as well. I have found only two beavers, though. (No, not the one on MIT’s class ring. The Brass Rat, as it is known, is a Cambridge resident.)

These large beavers live in a mosaic seal on the Grand Masonic Lodge that occupies the corner of Tremont and Boylston Streets. I have walked past it many times without being curious as to its origins. It presents a blank, if colorful, face to Tremont Street and a restaurant, currently defunct, occupies most of the Boylston Street side. Only the door on Tremont Street offers a glimpse inside.

The Grand Lodge at 186 Tremont Street is the third structure erected specifically by and for the Masons and its fourth home in the city. Built in 1898, it replaces the 1830 – 1832 Masonic Temple at the corner of Tremont Street and Temple Place. That temple gave its name to the street.

The erection of the Temple Place building incited a battle with the Commonwealth over the Grand Lodge’s Acts of Incorporation. To resolve the issue, the Grand Lodge sold this building to Brother Robert Gould Shaw, who sold it back in 1835 after Boston’s anti-Masonic emotions had calmed down.

A Gothic Structure on Tremont Street 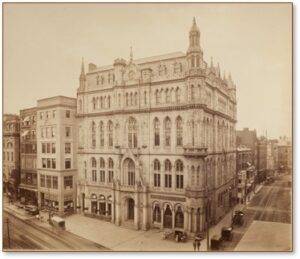 This fanciful seven-story temple had lancet-shaped pinnacles, lancet windows and elaborate Gothic ornamentation. These included pointed arches, window traceries, and ornate stonework. Tourelles of different sizes and shapes marked the roofline. The large octagonal tower, on the northwest corner, rose to a height of 120 feet.

In addition to the Masonic Temple, the building housed classrooms for Bronson Alcott’s Temple School for Children in 1834. The ground floor housed the Ivers & Pond Piano Company on one corner and the Home Savings Bank on the other. These businesses provided the Grand Lodge with revenue for operational expenses.

The Masons Build Up from the Ashes

When the burgeoning Masonic fraternity outgrew this building, the Grand Lodge sold it to the U.S. government in 1857 for $105,000 for use as a federal courthouse.

The search for a new site ended with the 1858 purchase of the Winthrop House hotel at the corner of Tremont and Boylston Streets. The Grand Lodge converted the upper floors for their use. When a fire destroyed this building in 1864, the Grand Lodge erected a new building on the same site that was dedicated in 1867.

Fire struck again in 1895, forcing a new discussion about selling the land and moving. Instead, the Grand Lodge razed the entire building and rebuilt a more substantial structure on the site. 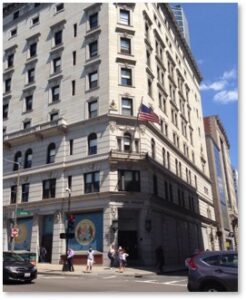 This current Masonic Hall was designed by the firm of Loring and Phipps, the preeminent architectural firm in Somerville at the turn of the century, notable for designing large school buildings throughout the northeast. The cornerstone was laid in June 1898 and the Concord granite building was dedicated on December 27, 1899. It has nine floors above street level and two below.

Granite string courses separate the first three floors from one another and from the six floors above. A shallow granite balcony runs above the third floor on the Boylston Street side.

The interior includes six meeting halls and a research library dedicated to Freemasonry, as well as the administrative offices for the Grand Lodge and other Masonic bodies and programs. 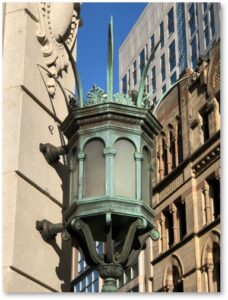 For many years storefronts occupied the street level to generate revenue, as with the earlier building. At that time, the entrance was located on Boylston Street. In 1966, the stores were vacated and replaced by mosaics. The entrance moved to the corner. Twin copper lanterns bracket this door. Above it rises a small balcony surmounted by a Palladian window with carved stone garlands above.

In 2017, the Grand Lodge removed the mosaics except for the seal and converted much of the street level to a revenue-generating restaurant. The entrance moved back to Boylston Street.

A Collection of Historical Objects

You can see the original headstone of Henry Price, founder of freemasonry in the United States. (His body resides in Hillside Cemetery, Townsend, MA, under a newer granite obelisk.) A lock of George Washington’s hair is stored in an urn made by Paul Revere. 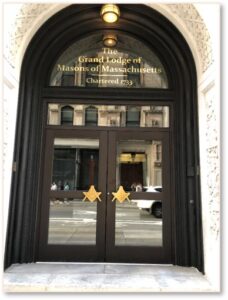 NOTE: The Grand Lodge of Massachusetts will hold an open house on Saturday, October 16 from 9:00 am to 3:00 pm. Stroll down Tremont Street and take a look inside.

The building and library are open to the public; tours are available on Monday, Wednesday, Friday between 10:30 am and 2:00 pm. I lacked the time for either a tour or the open house this week but hope to remedy that in the near future. Then I can write another post about the interior.