This is the 25th in a series of posts on largely unknown spaces
in Boston that are open to the public.

In a city as old as Boston, buildings often find new functions to perform. If we’re lucky, as with this Marriott hotel, the new owners renovate them with respect for the structure, its history and its purpose. (If we’re not lucky, the buildings are gutted and rebuilt from the studs-in with inferior materials.) One successful renovation in the Fort Point Channel District looks virtually the same from the outside but hides an historical gem on the inside.

Marriott’s Boston Downtown/Seaport Hotel on Congress Street occupies a structure that was once a warehouse for molasses and sugar. The Stillings Building itself went up on the site of a baseball field, which was in turn existed on land created from the South Boston Flats—a tidal mudflat. The Stillings Building belongs to a group of visually cohesive commercial buildings, almost all warehouses, constructed by the Boston Wharf Company from the 1880s to the 1920s. The Boston Landmarks Commission described these structures as,

“. . . an unusually coherent and well-preserved collection of late 19th and early 20th century lofts that reflect a critical period of social, economic, and physical development in the City and the region. The loft buildings are generally masonry, with simple volumes and flat roofs. Buildings are elegantly proportioned, with classically inspired details concentrated at entrances and cornices.”

These buildings in the Fort Point Channel District provide a wonderfully detailed and cohesive architecture that could not be more different from the interchangeable, cookie-cutter glass boxes now going up in the adjacent Seaport District.

Built in 1901 by the Boston Wharf Company, the six-story Stillings Building was designed by the BWC’s staff architects — which accounts for the consistency — in the classical-revival style. Norwich Partners LLC purchased the former sugar and molasses warehouse in 2011 for $8 million and the company promptly embarked on a $45 million renovation that was honored by Marriott with their “Best Custom Project” award in 2014. True North Hotel Group manages the hotel as a franchise .

Marriott’s Boston Downtown/Seaport Hotel shows a Congress Street façade that is virtually the same as the original warehouse, only cleaner. The building’s exterior displays, “granite trim and brick corbelling, precast and metal façade elements and expansive windows that distinguish the building from others built at the same time.” From the street you would never guess that inside is a hidden commercial space that takes us back to the nineteenth century.

Corbel: A piece of stone, wood, brick, or other building material projecting from the face o f a wall and generally used to support a cornice or arch.

Industrial Sculpture from the Warehouse

Rather than altering the façade to create a larger entrance, Group One Partners, Inc. put the hotel’s lobby behind the building on Thompson Street. Group One Partners did such a good job with the redesign that walking into the lobby feels nothing like walking into an ordinary hotel. The high ceilings show off the Stillings Buildings industrial past by displaying original massive wooden beams, along with iron pipes, HVAC ducts, and utilities.

Two enormous boiler doors dominate the lobby seating area. Cleaned and painted silver, they have been hung as “industrial sculpture.” Each door was cast with the following information:

When you walk around these boiler doors and past the elevator shaft, you enter the atrium, a large central space that rises through all six stories and is topped by a massive, hipped-roof glass skylight. The atrium walls feature the original glazed white bricks that amplify this natural light. Huge windows carry the light to the interior of all six floors. Several steel-framed bridges cross the atrium to connect the east and west sides of each floor. 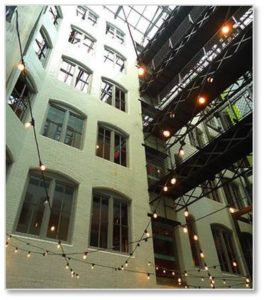 The rooms, should you be lucky enough to stay at the hotel, will not make you feel cramped. They continue the preservation with original 12-foot ceilings, oversize windows and massive post-and-beam construction. Wrap-around murals highlight Boston’s past.

For a respite from the twenty-first century, duck into the lobby and atrium of Marriott’s Residence Inn Boston Downtown/Seaport and Absorb the industrial warehouse vibe. Have a drink at the lobby bar before heading out to one of the district’s many attractions. 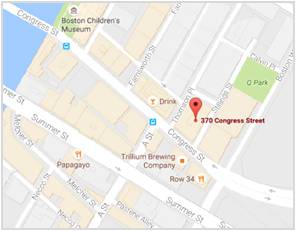 Visitors can access the MBTA’s Silver Line right behind the hotel, at Courthouse Station. Parking is available at the hotel or in a number of garages and lots in the area. It’s much cheaper after 5 p.m. and on weekends. More information is detailed on the hotel’s website.

Links to all the posts on Boston’s Hidden Gems can be found on the About Boston page of this blog.