I always have an audio book in the car and I am on CD #3 of “The Taming of the Queen,” by Philipa Gregory about Katherine Parr, the last wife of Henry VIII. Over time, I have listened to seven of Ms. Gregory’s 14 Plantagenet and Tudor books. 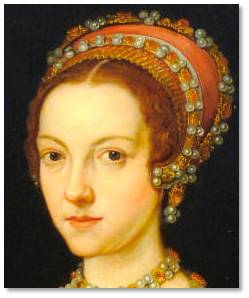 They tell  the story of English monarchs through the eyes of the women involved, rather than the men who held the throne. Although historians quibble with their accuracy (they are fiction, after all), the books do bring you right into the characters and times, making you feel like you were there and have met the people.

As I listen to this one—and integrate information from the others in the series— I am struck by some of the similarities between the reign of Henry Tudor and our current times.

Read on and see if you can spot them.

Henry Tudor was a golden child, born to wealth and privilege as the second son of Henry VII. Contemporaries described him as “the handsomest prince in Christendom” and he bore a charm and charisma that made him popular with men and women alike. Both intelligent and well educated, he enjoyed intellectual discussions in his youth, although he was neither as smart nor as erudite as he perceived himself to be.

King Henry became heir to the throne upon the death of his brother, Arthur Tudor. He also married Prince Arthur’s young widow.

Unlike his father, Henry VII, King Henry did not involve himself with the details of running a government. Instead he left it to loyal and trusted men who could be counted on to carry out the king’s wishes. He devoted himself instead to the pleasures of a merry court and could only be approached at a few specific times each day to discuss serious matters. 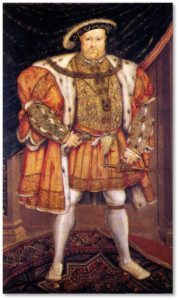 A man of prodigious appetites, King Henry helped himself to women, both between and during his six marriages. The women involved went from being delighted at catching the king’s attention to terrified of being the next rejected wife to disgusted by him physically. In his later years he stank from a suppurating sore on leg, foul breath and flatulence. Regardless, the ladies could not refuse the king because his will was law and they were bound to obey.

Watch this reconstruction of the young Henry VIII,

He lied and even violated his royal oath when it suited his purposes. This was most notable in the promise of a pardon to the rebels in the Lincolnshire Rising. The northern rebels laid down their arms in good faith but were slaughtered by the royal army.

In his later years King Henry seemed to experience a personality shift characterized by paranoia, anxiety, depression and mental deterioration. He became a bloated tyrant who used the Tower, the headman’s block and the stake to enforce rigid obedience among the nobles. In this reign of terror no one dared say no, question the king’s judgment, or criticize his decisions. Any criticism of the king, whether written or verbal, was considered high treason and punishable by death. 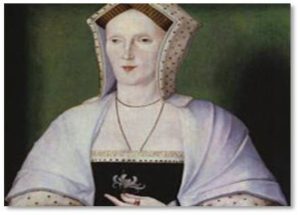 He became intolerant of anyone who opposed him, or whom he thought to be opposing him even in the face of evidence to the contrary. The Tower and the block waited for them.

Most went to their deaths with composure but saintly Lady Margaret Pole, Countess of Salisbury, resisted. The frail old lady (67) was hacked to death by the executioner and it took between 10 and 11 blows to bring her down. Pope Leo XIII beatified her in 1886.

Loyalty did not guarantee success or even survival, however. Henry VIII forced the nobles into signing a religious loyalty oath and they signed the Oath of Supremacy or they died. The capricious, changeable Henry turned on his best advisers, like Thomas More and Thomas Cromwell, sentencing them to death for imaginary crimes.  A best friend and supporter one week could be declared a traitor and an enemy the next. Later, he might regret their deaths, as if he had had nothing to do with them.

The smartest and shrewdest of his courtiers and advisers handled him with flattery, cosseting, agreement and support for his positions while sliding their own ideas in quietly, carefully and with great deference.

Although he is best remembered for his six wives, King Henry created great changes that had religious, economic, governmental and geographical effects. It has been argued that he brought England from a medieval country to a modern nation. Many of the changes he wrought were necessary but they were carried out brutally and people suffered because of them. Not King Henry, of course—other people.

His attempts to sire an heir forced his annulment from Catherine of Aragon without Papal approval. This led to a split with the Catholic Church and the Pope. It broke the power of the Church of Rome and created the Church of England, in which King Henry stood as the ultimate authority. Here began British sovereignty and a true constitutional monarchy.

In an act of dubious legality King Henry confiscated all monastic property held by the Catholic Church—monasteries, abbeys, and convents—along with their revenues and the treasures they held. And they were wealthy: The thirty richest monasteries were as rich or richer than the wealthiest nobles in the land. The king countered any resistance with threats, the use of fear as a weapon, and the bloody example of the Lincolnshire Rising.

King Henry distributed these properties among his favorites but did not give anything away. The nobles had to pay him, thus enriching the crown even further. This eliminated a powerful force that had countered the power of the king. It also did away with the charity that had been distributed by the monastic houses — vital to the peasants — without replacing it.

He enclosed and privatized lands that had been held in common and used by the peasantry. This diverted resources to be used for foreign speculation as well as the enrichment and self-aggrandizement of the nobility but it increased poverty for those least able to bear it. The national state and the trans-national market took precedence over the traditional sanctity of life and land. Capitalism can be said to have started here.

The Death of Henry VIII

Henry VIII died on January 28, 1547 at what was then the ripe old age of 56 and a great weight of 400 pounds. I’m amazed that his heart, taxed for years by that enormous bulk, held out for so long. Experts have proposed that he also suffered from leg ulcers, muscle weakness, Type II diabetes, syphilis, and Cushing’s Syndrome (an endocrine problem). King Henry might also have been Kell positive, a rare blood group that would explain the high number of miscarriages and stillbirths suffered by his first two wives. 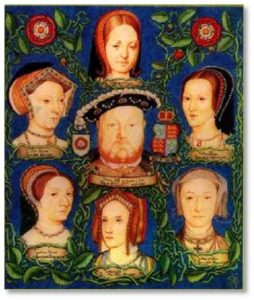 Henry VIII and his six wives

He was survived by his last wife, Katherine Parr. You can remember the six wives by their fates:

As to parallels, I let you draw your own. I’m going to keep listening.