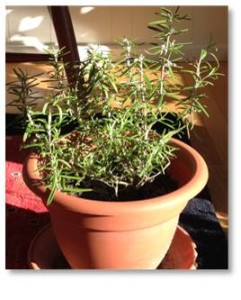 Last night I was watching an episode of Chopped—Waste Not—in which the chefs had to use ingredients that typically go unused or get thrown out in a restaurant kitchen. I felt right at home because I had just eaten the last of three meals made from holiday leftovers.

I find concocting a meal from leftover food a challenge and a creative opportunity.

On New Year’s Day we splurged and invited family members to a prime-rib dinner to celebrate both the holiday and the one-year anniversary of moving into our beautiful new home. It was a gorgeous hunk of meat—and likely the last one I’ll be buying for some time given the rise in beef prices that’s soon to hit supermarket meat counters.

Preparing the beast for the oven, I combined two tablespoons of Kitchen Bouquet, two tablespoons of Worcestershire Sauce and a teaspoon of olive oil and rubbed the mixture all over the outside of the meat. I blended a quarter of a cup of Gray Sea Salt and Herbs de Provence with fresh rosemary from its sunny pot and a tablespoon of fresh peppercorns until I had a fine mix and rubbed that on top of the marinade. 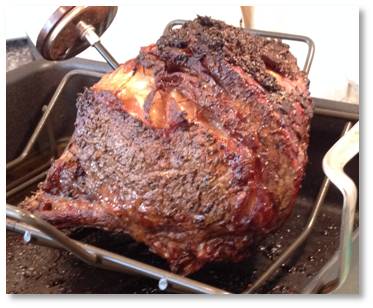 I used a basic recipe for roasting the beast, ensuring that it came out rare and had enough time to rest so the meat would be juicy. We ate the prime rib with mashed potatoes, pureed squash, tiny peas with boiled onions, and mini Yorkshire puddings. I threw the rosemary stalks into the potato water for additional flavor. I saved and refrigerated the water from the potatoes and from boiling the onions.

It was a lovely meal and we enjoyed every bite. The only problem was that some family members were unable to attend due to a sick child so I had more leftover roast beast than I had planned on.

Over the next few days, I found ways to turn the remains of the roast into additional succulent meals. The first possibilities were beef pot pie, roast beef hash, and—of course—roast beef sandwiches. I prepared none of these.

First, I pulled some cold rare beef from the roast to eat with a salad for lunch. Yummy.

Second, I sautéed onions and mushrooms in olive oil and, when they were soft and golden, stirred in a tablespoon of flour. Then I poured in two cups of Kitchen Basics Beef Stock with a tablespoon of cornstarch whisked in and let it simmer for a while. Next I added the sliced beef and heated it all up. While that was cooking, I divided the leftover mashed potatoes into two patties and sautéed them in olive oil until they were golden brown on both sides. The leftover peas and pearl onions went into a pan to heat and in a very short time we had roast beef in mushroom gravy accompanied by the side dishes.

Third, I dumped the bones with skin and meat into a stock pot, added the water from boiling the potatoes and onions, and poured in enough water to covered the ribs. I added one onion cut up, one carrot cut up, and a handful of celery tops to the pot. I skimmed the mixture as the it came to a boil and the let the pot simmer for a couple of hours. When the broth was a lovely rich brown, I strained it into a bowl and separated whatever meat remained on the bones, refrigerating both it and the broth. 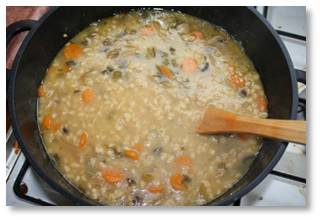 The next day, I skimmed the fat from the top of the broth and used it to make Mushroom Barley Soup with the beef scraps added in. I used the Zingerman’s Ann Arbor recipe that I found on Epicurious.

I typically find Jewish cooking too bland for my taste, though, (and I’ve eaten a lot of it) so I added in a third of a cup of red wine, more salt and pepper, and a dash of celery seed for extra flavor. The next time I make this soup, I’ll put in sherry instead of red wine and add chopped rutabaga as well. We had it for dinner with cornbread on the side.

That made four meals taken from one roast. If I had a dog, I would have given him the bones. Not bad, especially considering that prime rib is a luxury cut that we do not indulge in very often.

Now on to more ordinary meals in 2014—but also more creative ways to use leftovers.