Question: In what industry do companies:

Answer:  The airline industry (but you knew that)

Most people of a certain age remember when flying was fun and exciting. We remember being treated well, very well—as valuable customers should be. We remember free drinks and peanuts or pretzels followed by a hot meal. We remember courteous airline staff who seemed genuinely interested in making sure that our flight was a pleasant experience.  We remember the airline being concerned that we would remember our experience positively, so we would recommend the airline to others. 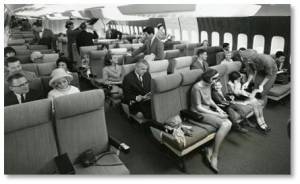 To quote Stephen King: “The world has moved on since then.”

Recently, The Boston Globe’s Christopher Muther actually wondered “What happened to the glamour of air travel?” He answered the question like this, “Unless you’re able to splurge for first class — or you own a private jet — travel is now anything but glamorous. Airports are crowded with women sporting bed head and donut pillows permanently affixed to their necks. Men in shorts and tank tops lifelessly pull carry-ons behind them, belabored expressions on their faces. They drag limbs across linoleum as if they’re extras from “The Walking Dead,” although these airport zombies always seem to have screaming children in tow.” But really, why dress up for an experience that makes you feel like the walking dead?  When the airlines have stripped out glamour, comfort, convenience, and even basic humanity, what is there to dress up for?

Today, flying anywhere is an endurance contest, one in which anyone outside of first class is treated like cattle. We fly because that’s the fastest—or only—way of reaching our destination. Therefore we grit our teeth and inure ourselves to an experience that most resembles Army boot camp. All that’s missing is the pilot calling us maggots—and I’m not sure how long it will take to get to that point.

The airlines need to make a profit, of course, and we understand that.  No one is asking for them to give away the seat.  All we want is to get from departure to destination in a way that allows us to feel like human beings as well as valued customers. Is that too much to ask?

Apparently, it is. Every time I think the airlines can’t make their product any more unappealing, they find new ways to do it.  Most recently, we had a spate of planes being forced to divert short of their destinations to remove a passenger because he or she was threatening violence over a reclining seat  These stories raised the distasteful image of experiments conducted by Ecologist John B. Calhoun in 1960.  He found that crowding rats into smaller and smaller spaces resulted in severe—and irreversible—behavioral patterns. 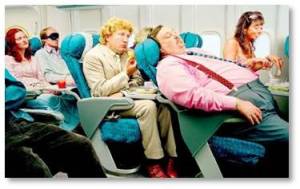 Coach class in the 21st century

Here’s a description: “Unwanted social contact occurred with increasing frequency, leading to increased stress and aggression.” It got worse from there: “Violence quickly spiralled out of control. Cannibalism and infanticide followed. Males became hypersexual, pansexual and, an increasing proportion, homosexual. Calhoun called this vortex ‘a behavioural sink.’ Their numbers fell into terminal decline and the population tailed off to extinction. At the experiments’ end, the only animals still alive had survived at an immense psychological cost: asexual and utterly withdrawn, they clustered in a vacant huddled mass.”

As more people are crowded into smaller seats with less legroom, they become stressed and the stress is causing violent behavior. When the person in front tries to recline his or her seat, it now impinges on what little space the person in the next row has. That person can no longer eat or work on the tray table and probably can’t even move easily in their seat. Sales of a product called the Knee Defender are growing: it prevents the seat in front of you from reclining, regardless of what the occupant wants. How have the airlines responded? (Hint: it’s not by adding more legroom). They’re thinking of removing the tray tables, thus making it even more difficult for passengers to work or eat while in the air. 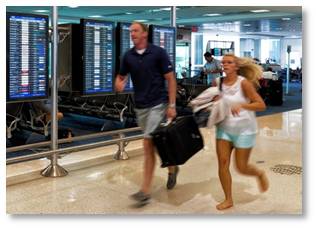 Wear your running shoes to make an American Airlines flight

Now @AmericanAirlines is adding another insult to those already endured by its passengers. Starting in its Miami International hub, the company is going to start bunching flights together instead of spreading them throughout the day. This creates “peak schedules” when their gates are very busy, followed by long stretches when the gates are largely empty.

In reporting this return to an old model, @WSJ said, “Airlines shunned peak schedules at hubs more than a decade ago because they meant higher costs such as more people and equipment, created too many delays and forced passengers to sprint through terminals to make connecting flights. Recently, though, much of the industry has gravitated back to peaks and valleys as a way to fill seats and generate more revenue.”

So, there you have it. To get one more person on a flight, as per CEO Robert Isom, American Airlines is willing to make everyone else miserable. After they have turned their Miami concourses into rush hour, they plan to roll out peak scheduling to their hubs in Chicago and Dallas-Fort Worth. I see planes full of vacant, huddled masses of people for whom reaching the gate was a stressful experience.  Be warned: The only recourse for customers is to avoid being that one additional person by flying another airline. 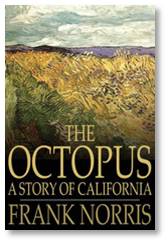 I’m reminded of Frank Norris’s 1901 muckraking novel “The Octopus,” in which he details how the railroad squeezed wheat farmers by charging exorbitant rates to ship their crops to market. The railroads, monopolies at the time, thought they could get away with this extortion because the farmers had no other recourse. They made the mistake of thinking they were in the railway business instead of the shipping business and believed that railroads would always have a monopoly.

That all changed in the fifties when Pres. Dwight Eisenhower built the interstate highway system. Now farmers and manufacturers could ship their products by road instead of rail. They leaped at escaping the abusive clutches of the railroads and the shipping model changed irreversibly.

The airlines are making the same mistake today. They think they’re in the airline business instead of the people-moving business and that they can get away with abusing their customers because passengers have no alternative. Someday that will change, too. Whether it happens via Star Trek’s transporter or going back to the future with high-speed rail, people will find a way to travel without being treated like cattle on the way to the slaughterhouse.

And when that happens, the airlines will lose the customers they have abused with such cavalier disdain for so many years.