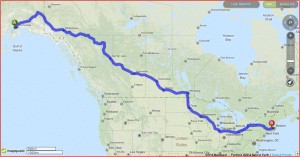 I’m back home from Alaska faster than I had expected because the Great Transcontinental Road Trip did not happen.  The hang-up was paperwork.  Driving from Alaska to Massachusetts requires crossing the border into Canada and then crossing back into the United States. For the latter, at least, one now needs a valid passport. My son’s passport had expired and, while he had applied for a renewal, he had somehow not signed the application.

After three days of trying unsuccessfully to pry loose his new passport, along with organizing, planning, packing, and loading, we realized that it would be simpler to drive the truck to a shipping company, ship the contents, then ship the truck and fly home. So that’s what we did, arriving back in Massachusetts yesterday after two marathon flights.

Getting to and from Anchorage, even by plane, is neither simple nor quick. On the way out, my United Airlines flight to Chicago went smoothly.  Once at O’Hare, however, the schedule fell apart. The equipment for the second leg of the trip was delayed in getting to Chicago. I was supposed to have a 90-minute layover with departure scheduled for 5:44 p.m. Instead our plane loaded at 9:30 p.m., backed away from the gate at 10:30 (to the applause of its passengers) and didn’t lift off until 10:45.  That meant arriving at Ted Stevens International Airport at 1:50 a.m. instead of 9:30 p.m.

The American airline industry is the only one I can think of that treats its customers with such disregard and even open contempt.  But that’s a topic for another post.

Although I spent most of my week in the far north working in one way or another, Morgan and I celebrated July 4 with a long walk in Kincaid Park, which is Anchorage’s largest park. We took the Coastal Trail, which winds along the eastern shore of Cook Inlet. Along the way, we spotted two young moose grazing in the salt marsh. We took pictures and had started off again when we heard a great crashing in the underbrush. Both moose had climbed the steep bank and they came out onto the trail about 20 feet away.  Morgan is used to seeing them in his front yard but this was the closest I’ve been to an animal that size without bars in between us.

Just driving around the city can be beautiful. There’s the Chugatch Mountains to the East and the Alaska Range to the west across Cook Inlet, so high that at first they look like a cloud bank. Denali rises 400 miles to the north but it’s visible on a clear day.  (No, I could not see Russia from there.)

We did get to the City Diner, one of my favorite places to eat, for one meal and to the Moose’s Tooth, for the city’s best pizza another day. On our last morning there I had a reindeer-sausage omelette at a little cafe near the hotel. Mostly I ate two meals a day and dropped a few pounds.

Art of the North at the Anchorage Museum

On  a cold, rainy Sunday we went to the Anchorage Museum, which combines art, archaeology, science, environmentalism, and children’s exhibits, all under one roof. We took a guided tour of the Art of the North section with docent Louise Crawford and then wandered around the rest of the building.

The trip home started with another delayed United Airlines flight but in this case it worked in our favor as we were running a little late. Fortunately, United had informed us of the delay early in the day because it meant we would miss our connecting flight to Boston.  So I got on the phone and re-booked us onto the 10:44 red-eye, a flight that I had taken many times when I was travelling on business. 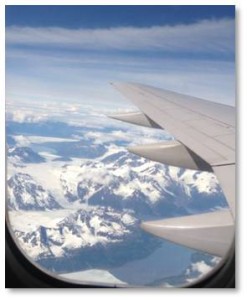 Flying Out of Anchorage

The plane was packed, as always these days, and I didn’t have a window seat. That’s a disadvantage when flying into or out of Anchorage because flying over Cook Inlet provides some spectacular views.  After five and half hours of flying, each with a cat under the seat in front of us, to get to San Francisco, we emerged at Gate 83 with a connecting flight at Gate 92.  That sounded good, especially since we had only 20 minutes to boarding time.

Then we discovered that Gate 92 was actually in the International Terminal, which meant walking down a long concourse to the hub, across the hub and out to the end of another long concourse with two escalators (up, then down) along the way.  Every other Boston passenger had re-booked for the same flight so now it was also packed. We got to the gate just as they started boarding Group 1. BTW: This is like flying from Boston to San Francisco, racing to another gate, and getting on a plane back from San Francisco to Boston.

I had settled into my window seat and was hoping that the middle seat would remain empty when the flight attendant came up and asked the businessman in the aisle seat if he wanted to move up to first class so a mother could sit next to her daughter.  Why him? He was still crisp and rested, looking like he had gotten out of a meeting, taken a clean, air-conditioned cab to SFO and strolled leisurely to the gate.

“Oh, me, me, me!” I exclaimed. The flight attendant looked startled at my outburst and offered to let us do rock-paper-scissors for it. Instead I made my case. Why trust to luck when you can make your own? I asked the man if he’d just gotten off the 5-plus hour flight from Anchorage and power-walked across the terminal with a cat carrier. He graciously deferred to the crazed, sweaty, exhausted grandmother who probably looked like she would go for his throat in another minute and I got to fly home first class, a wonderful treat after a long and stress-filled week.

This was my second trip to Alaska and I would go there again, but only if it meant taking the Inside Passage cruise and a train up to Denali.  Just not any time soon.