In years of eating out, especially at breakfast, we have noted a distinct difference in the way restaurants treat coffee and tea drinkers. Picture yourself in an eating establishment, whether it’s fine dining or a pancake house, and imagine these two experiences:

A Cup of Coffee: 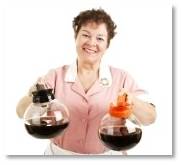 The server appears immediately with a pot in hand and asks, “Coffee?” as if he/she already knows the answer. Requesting decaf may add a few moments as the server goes to fetch the pot with the orange top, but that’s all.

At periodic intervals during the meal, the server will cruise by with either a pot in each hand or the decaf, to refresh your mug with steaming-hot brewed coffee. The only question you are likely to be asked is whether you want more.

Restaurants are proud of their coffee service and many, particularly diners, advertise a “bottomless cup of coffee.”

The server nods at your order and goes away. Long moments pass before he/she returns with one of two options: (1) A cup half filled with hot water and a tea bag attached limply to the side or already floating in the cup. When you remove the teabag, the cup is less than half full. (2) A small tin pot or glass carafe with hot water and a selection of tea. You pick the teabag you prefer and drop it in to brew. 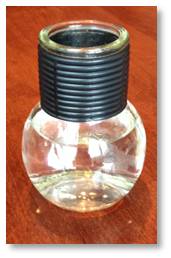 At no point during the meal will the server ask if you want more, much less provide it automatically. No one on the wait staff will cruise by regularly with a pot of hot water in his/her hand.

If you ask for more hot water, you get one of two responses: (1) “You want more hot water?” This is spoken in an incredulous tone that scolds you for your temerity. (2)  The server returns with another small pot or half cup of hot water which he/she delivers with a put-upon expression, as if asked to perform some completely over-the-top function.

A Second Cup: Out of the Question

A second teabag is out of the question. It would also be more money. There is no such thing as a bottomless cup of tea.

To highlight how ridiculous this situation is, reverse the two procedures. Imagine ordering coffee and having the server carry a small Keurig machine to the table along with a selection of pods. The customer selects the coffee flavor of his choice and “brews” it right there at the table. The server then disappears with both machine and pods and the customer never sees them again. Asking for a second cup would be as outrageous as ordering a bowl of Klingon gagh—and elicit about the same reaction from the server.

Having noted this coffee vs tea pattern, we have made our own observations about what tea means for the restaurant.

First:  Hot water is the most precious ingredient in the establishment’s kitchen, more costly than saffron, caviar, lobster, or truffles. Restaurants carefully conserve hot water  and ration it to customers in small quantities. Providing too much of it for tea would raise the restaurant’s food/cost percentage to unacceptable levels.

Second:  Chefs do not know how to brew loose-leaf tea. This must be a highly complicated procedure beyond the scope of experts who have mastered the soufflé, the five mother sauces, crème Anglaise, tartine, beouf en daube, cassoulet, Sacher torte and other complicated dishes. The chef therefore abdicates responsibility for brewing the beverage and delegates this task to the customer to perform via the humble teabag.

Third: Tea bags themselves must be far more expensive than coffee beans.  While coffee is poured with abandon and almost forced upon customers who don’t want any more, tea bags are, like hot water, hoarded in the kitchen and provided only one at a time.

Four:  Restaurants consider tea drinkers to be a lower form of customer, unworthy of the same respect and attention lavished on coffee drinkers.  It’s as if they expect us to sit down, eat the free bread and butter, order a bowl of soup and a cup of tea, then slink away with the silverware in our pockets. We might as well ring a bell and call out “Unclean. Unclean.” when we approach the hostess. 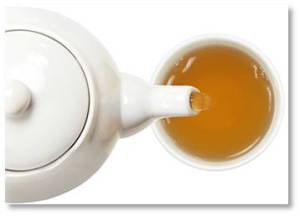 I have no explanation for this behavior. Brewing tea in the kitchen and providing it in the same quantity as coffee seems like a no-brainer to me. After all, they do it with iced tea so why not with hot tea?

And lots of people drink tea, after all. Captain Picard of the Starship Enterprise famously enjoyed his “Tea. Earl Grey. Hot.” And the synthesizer gave it to him. It did not provide him with a cup of hot water and a tea bag.

Many more people would probably drink tea if restaurants made it as attractive and readily available as they do coffee. Imagine a restaurant where the servers walk around with pots of fragrant tea, asking only, “Oolong? Green? Earl Grey?” See, you’re smiling and that demonstrates just how ridiculous—and ubiquitous—this difference in attitudes is.

Exceptions to the Rule

There are a few exceptions. The Deluxe Town Diner in Watertown, for example, offers a tea menu with multiple varieties and flavors of white, green and black tea as well as herbal teas. They bring a large pot to the table filled with very hot water in which the loose tea of your choice steeps.

In most places, though, the tea drinker is left to scrounge up as much of the precious hot water and hoarded tea bags as he or she can wangle from the server. It doesn’t matter whether the restaurant has white linen tablecloths or Formica tables, tea drinkers “get no respect.”

The only option is to take another approach and think outside the teabag. When we eat out, I order decaf.