In yesterday’s post about visiting four museums in Washington DC. I took you to the National Gallery and the National Geographic Museum. Today’s post visits the presidential portraits at the National Portrait Gallery as well as the Smithsonian American Art Museum. Both museums occupy the same building near Chinatown. Although they are part of the Smithsonian, the exhibits couldn’t be more different.

Burning Man at the Renwick 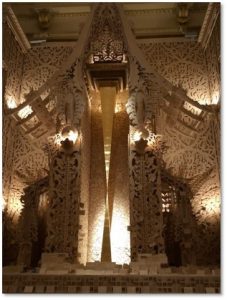 With the grandkids, we took in  “No Spectators: The Art of Burning Man” at the Renwick Gallery. If you’re unfamiliar with the Burning Man festival, it takes place for one week a year when tens of thousands of people create a temporary encampment in Nevada’s Black Rock desert. This year’s Burning Man festival runs from August 26 to Sept. 3.

I’m not likely to ever go to Burning Man. The idea of a week without toilets or showers while a steady wind blows alkali dust across the playa doesn’t appeal. My vacations tend to involve clean sheets, hot showers, and a good breakfast. But I do agree with the festival’s goals: a “society that connects each individual to his or her creative powers, to participation in the community, to the larger realm of civic life, and to the even greater world of nature that exists behond society.”

The Art of Burning Man

A participatory event—thus, no spectators—it brings together artists of all kinds, in and out of costume, performing and creating, sharing and engaging with one another. Some of the structures created for each festival are burned ritually at the end. Some of these are quite elaborate and require many hours of time. Other creations return to civilization with their creators. 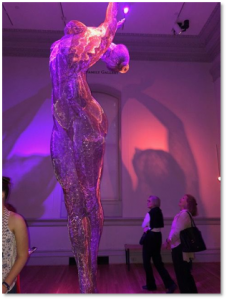 This exhibit includes artworks that did not turn to ash: costumes, jewelry, vehicles, structures, signs, displays and miscellaneous other items. Thus, we saw,

“Immersive room-sized installations, costumes, jewelry, and ephemera transport visitors to the gathering’s famed ‘Playa,’ while selected photographs and archival materials from the Nevada Museum of Art’s show City of Dust: The Evolution of Burning Man trace Burning Man’s growth and its bohemian roots.”

It’s an interesting combination of an elaborate, symmetrical, classical structure with objects of unlimited design and imagination. We didn’t wait in line for the virtual reality exhibit but I did lie on the floor to look up at the kaleidoscope projected on the celling, go into a hexagonal yurt, and watch the giant colorful mushrooms open up. You don’t get to do that at most museum exhibitions.

The next day we took a tour at the National Portrait Gallery that started with Pocahontas, went through diverse figures both public and private, and ended with the gallery of American Presidents. We got a history lesson along with the art and a pretty good overview of what’s in the museum. If you want to see portraits that depict people of color, women, inventors, sports figures, writers, artists, and ordinary folks, this is the place to come.

We saw the two newest portraits to be installed, Michelle Obama by Amy Sherald and Barack Obama by Kehinde Wylie. (They hang in different galleries.) On the whole, I prefer the President’s portrait: it’s bright, colorful, vivid and compelling. It stands out among all the staid, conservative portraits of Important Men wearing Business Suits and Looking Authoritative.

Art By and About Americans 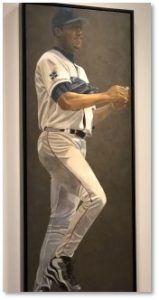 After the tour, we wandered through the American Art galleries—the two collections are intertwined. I have wanted to visit this museum since I first saw it while working the old Comnet trade show at the nearby Washington Convention Center. That was a long time ago.

The art here is by and about the country and its people. We saw some wonderful pictures of Americans at work and the country during the post-war period. There’s a whole room of Native American portraits and a gallery of American inventors and innovators. You can wander from one giant Hudson River School painting by the likes of Thomas Moran, Alvan Fisher, Alfred Bierstadt and more to another. The museum offers so much to see, in fact, that my feet gave out before my interest flagged.

We headed out for a restorative lunch before picking up our things and going to the airport for the flight home. After a weekend chock-full of grandchildren and art, we were happy to just sit down and let Jet Blue take us home. But we will be back.