Skip to primary content
Skip to secondary content
In this morning’s Wall Street Journal, Columnist Edward Lazaer published an article called “The Hidden Jobless Disaster.”  Mr. Lazaer, chairman of President Bush’s council of Economic Advisors, a fellow at the Hoover Institute, and a professor at Stanford University’s Graduate School of Business, has an interesting perspective on today’s employment market. Yesterday, The KCM Blog published a post by John Downey, director of Prestige Senior Living, entitled, “Senior Housing: Silver Tsunami About to Hit.”  While these two pieces address different subjects, they together highlight a situation regarding unemployment and Social Security that no one seems to want to address head on.Oh, heck, I’ll do it.Item #1:  Mr. Lazear points out in @WSJ that people, politicians and pundits alike should be watching the employment rate, rather than the unemployment rate as an indicator of economic recovery. He says that the percentage of the working-age population that is employed has declined from 63.4% in 2006 to 58.6% now.  So, even though the unemployment rate has gone down, the number of people who are actually working has remained pretty steady for the past seven years.  The reason is what the Bureau of Labor Statistics calls the U6: the number of individuals who are “marginally attached to the workforce—including the unemployed who dropped out of the labor market and are not actively seeking work because they are discouraged, as well as those who are working part time because they cannot find full-time work.”

Item #2:  Mr. Downey notes the impending impact of “the largest demographic tsunami in the history of our nation,” on the real estate market. He points out that 10,000 people turn 65 daily in the United States. “Today there are 34+ million seniors (aged 65+) and by the year 2030 over 70 million will live in the U.S.”Item #3:  As both John Blackstone on the CBS Evening News and Scott Pelley on 60 Minutes have reported, technology companies often start letting employees go between the ages of 50 and 55 in favor of hiring younger workers, as well as outsourcing and offshoring jobs—all cheaper options than paying older and more experienced employees.Item #4:  In the race that is currently underway in Massachusetts to replace John Kerry in the Senate, Republican candidate Gabriel Gomez (47) believes we ought to raise the eligibility age for Social Security.  He is not unique in this; many people believe that the only way to save Social Security is to “encourage” older people to work longer and collect later.

Putting It All Together

Let’s put all four things together and see what we get. More people 50 and over are either forced out of the labor market or stop looking because they can’t find work in their field, or any work at all. The eligibility age for Social Security has gone up already and could go even higher. So where does that leave the older employee?Educated and trained workers, who often have advanced degrees, should plan for a future that looks like this: You’ll have a career in your field for 25 to 30 years.  Make the most of it.: work hard, do your best and save all the money you can.  Somewhere between 50 and 60, your job will go away and prospects for getting another one will evaporate. Unless you are a male actor, an @60Minutes reporter, or a United States Senator, your career is over. It will not come back. Get over it.What to do then?  Well, you won’t be able to collect Social Security until 70—maybe 75. The government will still consider you a viable worker who should be gainfully employed so you won’t find any help there.What’s that you say?  You’re too young to retire anyway?  You still want to work?  Join the club: there are millions of people just like you in it and more are flooding in on that SilverTsunami every day.  They won‘t be able to find work either.  That leaves 20 to 25 years of unfulfilling underemployment ahead of you. 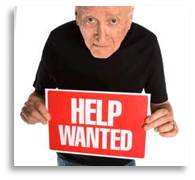 Start checking out those Help Wanted signs at Dunkin Donuts, McDonald’s, Walmart, Target, and popular retail stores at the mall. Just like when you were a teenager, there will be 50 applicants for every entry-level, minimum-wage job available in fast food, retail, and service businesses. And unless you have saved a lot, founded a software company acquired by @Facebook, or won the lottery, you’ll need to put together two or three of these jobs to make ends meet.  Keeping busy in your Golden Years won’t be a problem.

If you can’t get even one of these jobs, things will get tougher.Pawn those “Outstanding Employee” awards you won. Sell the house and downsize–but do it before the majority of Senior Citizens get the same idea and depress the real estate market.. Move somewhere cheaper and get a condo you can buy outright.  Or move in with the kids. After all, they owe you for all the money you spent on their college educations and thus don’t have to spend now.It’s not a pretty picture but it’s the one that seems to be playing out. We might hope that companies will begin to appreciate workers who are trained, experienced, hard-working and dedicated, but I wouldn’t count on it.