When perusing the new offerings at the library or bookstore, I find a particular pleasure in finding a book by an author whose work I enjoy, particularly if it’s part of an ongoing series. A series of novels, regardless if the quality is uneven, provides far greater depth of character, location and period as the story arc unfolds over time and characters grow more interesting with age. Reading a series novel is like spending time with some of your favorite people. For me, these people include women like Kinsey Milhone, Stephanie Plum, Katya Hijazi, Maisie Dobbs, Carlotta Carlyle and Lady Julia Grey. But my literary family also extends to more aggressive protagonists from Spenser and Jack Reacher to Joe Pickett and Repairman Jack.

So I have been happy to find—in the space of one week—new books in two of my favorite mystery series. In a happy coincidence they are both authored by women with the same last name.

First I requested “Who Buries the Dead” by C.S. Harris from the library so I could read it right away. This is the latest in a series of historical mysteries set in London during the Regency period. Sebastian St. Cyr, Viscount Devlin, is a most unusual aristocrat in many ways: elevated from the tenuous status of third son to Viscount and heir, possessed of abnormally keen eyesight and hearing, concerned with issues beyond the interest of most aristocrats. 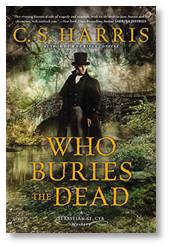 Viscount Devlin involves himself in the unseemly (for a gentleman) business of solving murders because of something that occurred when he was serving as a British Army officer in the Peninsular War. When the series of novels begins, he is single, certain of his position, and having an affair with a beautiful actress. Now, ten books into the series, he is married and a new father, uncertain of everything having to do with his own title and parentage.

I enjoy these books for their marvelous sense of time and place, for what I learn about the history of the period, and for the wonderfully drawn people. The latter include not just the main characters but the “smaller” folk as well: the costermongers, gravediggers, street sweepers, tavern keepers, merchants, servants, army riflemen, and Bow Street runners among the many others who make Viscount Devlin’s London such a vibrant and interesting—if not always pleasant—place.

“Who Buries the Dead” is a worthy addition to the series and one that I enjoyed from beginning to end.  It involves the burial vault of King Henry VIII and the disappearance of the head of King Charles I, who lost it when he was convicted of high treason. Did you know where Henry VIII was buried and which of his six queens shares the vault with him? I sure didn’t.

I’m currently well into “Day Shift” by Charlaine Harris, the second in her series about the tiny, dusty Texas town of Midnight, Texas. It couldn’t be more distant from bustling, tumultuous Regency London but it’s equally fascinating. 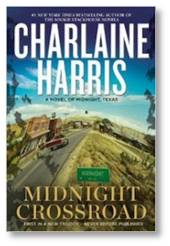 Over the years I have happily read my way through most of @RealCharlaine’s mystery series. Her protagonists tend to be women who have been damaged or who possess a trait or talent that makes them different.

My favorite books are the ones about Harper Connelly, an ordinary woman who was struck by lightning and now can sense the presence—and the last moments—of the dead. Next I enjoyed visiting with Lily Bard, the housecleaner of Shakespeare, Alabama, who trains obsessively in karate. Totally different is Aurora Teagarden, a plump Georgia librarian who has a wicked wit and an active libido but bad luck with men. Last comes Sookie Stackhouse, heroine of HBO’s True Blood series. I watched the television show before attempting the books and found that TV had spoiled me for the novels. Now that True Blood is off the air, however, I may pick up the series where I left off.

So I was excited when “Midnight Crossroad” appeared last year and I raced through it in record time. Although the town consists of just a few small buildings at the corner of Witchlight Road and the Davy Highway, its denizens are anything but ordinary and they’re always interesting. You will enjoy meeting every one of them, even the cat with the unfortunate name of Mr. Snuggles. Maybe especially the cat. 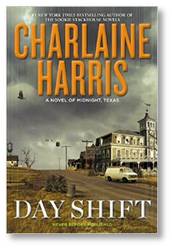 “Day Shift” brings us the rehabilitation of an old, long-abandoned hotel now repurposed as a residential facility for people waiting for space in assisted living. The hotel’s opening brings new people to Midnight along with the promise of an economic boost to a place that needs both badly.

Like the rest of Charlaine Harris’s characters, the people of Midnight, Texas, are often not quite what they seem. Half the fun is in figuring out what they really are, from the prosaic to the mysterious, and there’s someone for every reader to have a favorite. Even the cat. Maybe especially the cat.

I’m only a third of the way into “Day Shift” and looking forward to every page. Come visit Midnight and you’ll find yourself engrossed as well.

Now I need to get my hands on “Endangered,” C.J. Box’s new novel about Wyoming Game Warden Joe Pickett, which came out in March.  Then I’ll have a trifecta.