The Memorial Day weekend is upon us, bringing with it good things. It officially ushers in the summer season, of course, and that opens the doors to many wonderful events and activities. Sometimes warm air comes along with it. It also means the bubble is off the pool at the Longfellow Club in Wayland MA so we can now do our water aerobics classes outside. This morning, however, the temperature was about 50 degrees and cloudy so I slept in. And it means that summer movies will be flooding into the theaters, displacing the thin stream of mostly feeble offerings that have been filling in since the end of the holiday movies.

I haven’t posted many movie reviews lately for exactly that reason: there wasn’t much to see or to say. But we did catch a couple of films in the last three weeks, one indie and one major release, that are worth writing about. 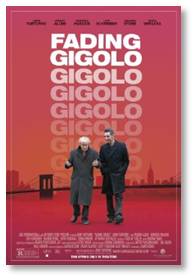 This movie was written and directed by John Turturro, who takes the lead role assisted by a cast of considerable weight.  I found it interesting and enjoyed watching it but was distressed by its plot for reasons that became more clear over time. Mr. Turtorro plays Fioravante, a florist and plumber, who is as much in need of money as his good friend Murray, played by Woody Allen. Murray has had to close his rare book store and both men are scrambling to make ends meet.

Then Murray discovers some rich women who are looking to have a threesome and he persuades Fioravante to take the role of gigolo.  The money is very good so Fioravante overcomes his scruples and embarks on the role of a male whore.  This did not strike me as a natural fit. Mr. Turturro is too old and, frankly, unattractive to be any woman’s idea of a hot date. And the role of pimp sits uncomfortably on Mr. Allen, who has own struggled with accusations of sexual impropriety involving the children of Mia Farrow. It would seem good sense for him to stay far away from roles that have anything whatever to do with sex.  In fact, I would prefer it if he stayed behind the camera altogether.  His neurotic shtick ceased to be either attractive or funny as far back as 1995, when he looked more like a lecherous grandfather than a romantic lead in Mighty Aphrodite.

If Fading Gigolo had focused only on this plot line, it would have failed dismally. But throw in a sub-plot about true love with the widow of a Hasidic rabbi who is pursued by her childhood sweetheart, now on the religious police force, and things get a lot more interesting.  Add in a cast that includes Sharon Stone, Liev Schrieber, Sofia Vergara, and Vanessa Paradis with small roles by Bob Balaban, Aida Turturro and Michael Badalucco and the movie gains heft.  In addition, New York City becomes a character in its own right as we travel from Greenwich Village to a Brooklyn Hasidic community and back again.

As I said, I enjoyed Fading Gigolo and recommend it to the adventurous seeker of independent films. But the premise of Woody Allen pimping out his best friend left a bad taste that I just could not overcome. 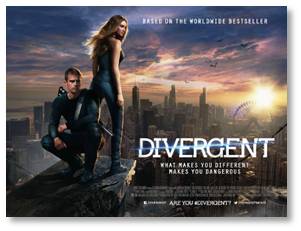 You couldn’t get a more different movie than this one. It’s based on a young adult novel by Veronica Roth and features a young warrior woman like Katniss Everdeen.  I have no problem with this kind of story as it breaks the usual Hollywood mold that depicts female characters as either (1) sexual object, (2) manic pixie dream girl, (3) helpless tagger-along who screams a lot and twists her ankle, (4) black widow who sucks the life out of men, (5) drug addict / alcoholic, or (6) old hag.  This new trend of movies with strong, competent women who can stand on their own and don’t need a man to support or rescue them is both welcome and long overdue.

Shailene Woodley plays Beatrice/Tris, who is growing up in a dystopian society in which people are assigned to one of five clearly defined factions.  As with the Hunger Games (and Harry Potter), there is a sorting process in which teens choose their factions based on a testing process, then leave family and friends behind.  “Faction over blood” is the call. Except that young Beatrice is a peg who does not fit neatly into any of factional holes.  She’s divergent—and that poses a threat to the Powers That Be, played by Kate Winslet.

Well, what teen hasn’t felt outside the normal structures of society? What young person hasn’t yearned for something beyond the dreary expectations of adults?  What teen hasn’t wanted to break out, to be different, to try something new and exciting, to become something no one has ever seen before?  Divergent uses this teen angst to create an interesting story in which Tris must prove herself despite being continually at the bottom of the rankings for her faction, the police force called Dauntless.  The Dauntless kids play with high stakes and they play for keeps. Tris has to keep up or she’ll be kicked out to join the factionless drifters at the fringe of society–or worse. 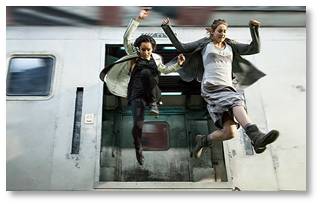 Critics have complained that the training process takes too long but that didn’t bother me. In fact, that seemed to me to be the whole point. Tris doesn’t get to be a Dauntless hero overnight.

She has to work hard and overcome obstacles to get to the point where she can be part of the bigger struggle between Dauntless and Erudite, the faction that launches a coup to take over the government.  Like the original Karate Kid, she has to sweat and her success is more believable because we see her do it.

Divergent wasn’t a perfect movie but I enjoyed it and I look forward to its (inevitable) sequel, Insurgent, which is being written by Oscar-winning screenwriter Akiva Goldsman.  Mr. Goldsman has a lot of successes under his belt, particularly in the realms of science fiction and fantasy, so there’s reason to be optimistic

In the meantime, I recommend Divergent to anyone who enjoys watching strong women and enjoys dystopian science fiction.  The movie is well done, if not brilliant, and could well turn into the next Hunger Games-style YA franchise.