When I put together my annual post on upcoming science fiction movies, I exclude superhero action flicks because they constitute a genre all their own. Nevertheless, when we recently saw Avengers Age of Ultron I couldn’t help comparing it to Ex Machina, a bona fide science fiction movie. Basically it was a battle of brawn vs. brains. 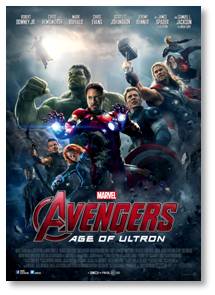 @Avengers has no dearth of brains: Tony Stark is a genius and Bruce Banner is a gifted scientist. They are both comfortable working hard in a lab to solve problems that would stump the average nuclear physicist much less the rest of the Avengers team. In addition, the movie shows them working hard, failing, trying again and again and again. Eventually, they cook up their own personal brand of Armageddon which, once loose, is difficult to put back in the box.

And Age of Ultron does show us some interesting personal moments in the lives of the team: the backstory on Natasha Romanoff being trained as an assassin, the Maximoff twins signing on with Hydra to get revenge on Tony Stark, a visit to Clint Barton’s hidden family life, and the beauty-and-the-beast romance between Natasha and Bruce. These are, to me, the most human and thus the best parts of the movie. But then, I’m the wrong age and the wrong gender for the fanboy target audience.

The dialog as written by Joss Whedon is dry, witty, sarcastic, ironic and often funny. Mr. Whedon has said that he identified with Ultron and that must be why I often liked this new villain better than the good guys. Ultron, unencumbered by testosterone, emotion, conscience, and anger management issues, simply goes about his agenda. He (it?) knows what he wants and proceeds to make it so even if it’s totally crazy. When confronted by the Avengers, Ultron puts them down both physically and verbally without breaking a machine-oil sweat, thus establishing his dominance as alpha machine. Cool beans.

Periodically, however, Avengers: Age of Ultron jumps into Hyper Action Mode with the slam-bang fighting that the young male target audience buys tickets to see. And I sigh. Boring. Is it over yet? No. How about now?  It’s not just that I mind the fighting; it’s that the battles are so simplistic, so lacking in style, skill, and sophistication. Only Jeremy Renner’s Hawkeye demonstrates any real abilities, firing his dead-on arrows with precision accuracy. Other than that, the fights are all punching, slamming, pounding, blasting and demolishing. Pow! Bang! Slam! Blast! A mixed-martial-arts cage fight would be more interesting to watch than this. In fact, a superhero with real martial arts abilities would be much more interesting than this. Oh, heck, Kwai Chang Caine going mano-a-mano with a Wild West bully was more interesting to watch. 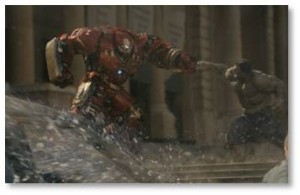 Nothing is safe in the Avengers franchise. Planes, trains, and automobiles all crash and go boom. Also crunch, bang and splat. Buildings under construction and buildings already completed are demolished with abandon. There’s more broken glass than a bull in a window factory could produce.  What’s clear is that bystanders like you and me don’t want to be anywhere near this team when they go after their man—or machine—because a bus is likely to drop on our heads.

In addition, the plot demonstrates the franchise’s—or Mr. Whedon’s—fixation with metrocide. Not content to threaten the world and commit a fair amount of collateral damage, Avengers: Age of Ultron seeks to destroy yet another whole city. In the first Avengers movie, New York City went under the hammer and suffered the consequences. After the destruction wreaked by the Avengers on the Big Apple, repairs were estimated at $160 billion. With a B. When you want to save the world at all costs, make sure you have a good insurance policy and the premiums are paid up.

In this film, it’s the fictional capital city of Sokovia that Ultron uses as a weapon. Yes, the entire city. I can’t tell you what happens without spoiling the plot but I did think, “What? Again?” 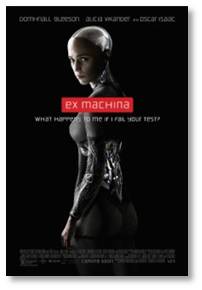 For something quieter and a lot more personal, try Ex Machina. In this movie, which takes place largely in and around one rather spectacular house, most of the real action goes on inside the minds of the characters. Here the plot is all about what’s real and what’s perception and the questions it raises are legion:

@ExMachinaMovie is all about subtlety and sophistication. Here’s the premise from Rotten Tomatoes:

“Caleb Smith (Domhnall Gleeson), a programmer at an internet-search giant, wins a competition to spend a week at the private mountain estate of the company’s brilliant and reclusive CEO, Nathan Bateman (Oscar Isaac). Upon his arrival, Caleb learns that Nathan has chosen him to be the human component in a Turing Test-charging him with evaluating the capabilities, and ultimately the consciousness, of Nathan’s latest experiment in artificial intelligence. That experiment is Ava (Alicia Vikander), a breathtaking A.I. whose emotional intelligence proves more sophisticated–and more deceptive–than the two men could have imagined.”

It’s difficult to say much more than that about the plot without giving away critical points. Suffice it to say that I was riveted by this movie. Does it have some faults? Yes, certainly. I could have done without the “breathtaking A.I.” and would have preferred a cybernetic organism that was less human and less gorgeous. But then the Turing test would have lacked a critical component. And can robots have sex? Really? Can we get past this fixation, please?

Still, if you prefer brains to brawn, subtlety to slam-bang fights, mental agility to physical dominance, you will like Ex Machina. But you had better see it quickly. To date it has a total gross of $19,556,131 vs. Age of Ultron’s $372,030,708. In Hollywood, money talks and movies that don’t make a lot of it walk out of the theaters quickly. 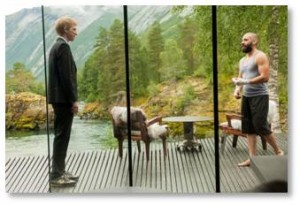 Caleb and Nathan meet in the house

When it comes to how the American public votes in the brawn vs. brains debate, there’s certainly no contest.

NOTE: The “house” in Ex Machina is actually a combination of a house in Norway and the nearby Juvet Landscape Hotel. You can stay there for between €347 to €467 a night. The Jackson Pollock painting was a reproduction.