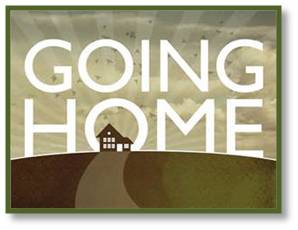 Home to me has never been a house or street address, or as Robert Frost so eloquently said “the place where, when you go there, they have to let you in.”  Home has always been the place where my military father was stationed.  The house, and sometimes even the furnishings, came with the job.  We were merely tenants until the next assignment came and it was time to move on.

When I was 14 my Dad received orders for a one year hardship tour to Korea.  It’s called a hardship tour because it’s unaccompanied—family remains behind.  This posed a problem for a family our size—we were not permitted to remain in military-sponsored housing since my Dad would no longer be stationed there.  We were in Germany, which meant a stateside relocation.

You can’t uproot a family with five kids without a support structure.   With my Dad halfway around the world, it was going to be very hard on my mother, so the decision was made to go home—her home—the northern Wisconsin town of Hurley.

When you are 14, you think about things like the make-up counter at Woolworths, American television and a town where everyone speaks English.  We would be living in the U.S., just a few streets away from my grandparents, and I would begin my freshman year in the same high school my mother attended.

We moved in the summer.  My parents settled us into the town where my mother had been born and raised, and my Dad left for Korea.   My 14-year-old self did not comprehend what a difficult year it would be for my mother.  I’m still mentally apologizing for the things I did to contribute to it.

Where 51 Ends and the Fun Begins

A few words about Hurley.  It is located on the Montreal River, on the border between Wisconsin and the Upper Peninsula of Michigan, at the end of highway 51.  In its heyday it was home to iron ore miners; famous as the town that ignored prohibition and became a hide-out for Chicago mobsters like John Dillinger, Al Capone and “Baby Face” Nelson.

Silver Street ran through the center of town and back in the day it was full of girlie shows, brothels and speak-easies that conveniently became known as “soft drink parlors” during the alcohol embargo.  In 1938 Hurley records listed 115 businesses, 80 of them were bars with colorful names like the Iron Nugget, Nora’s Red Slipper Lounge and Silver Dollar Saloon, all of them happy to separate a miner from his pay check.

Everything came to a halt in the sixties when mining became financially impractical.  As the jobs went away so did the residents.  The town’s economy slowly deteriorated.  When we moved there the population was just over 2400 and they were down to 56 bars.

Being 14 was hard but living in a small town where you are the odd one out made it harder.  Everyone knew everyone, nobody had lived anywhere but there, and I did not fit in.  Teenagers sharing a lifetime circle of friendship have no interest in welcoming an outsider.  I spent a lot of time being miserable and wishing for high cheek bones and straight blond hair.

This was the year I decided to try smoking (got caught, never did it again), skip school (got caught, got a three-day suspension) and attempted to straighten my dark curly hair (a moderate success).  This last effort was a clandestine operation that involved my mother’s GE iron and some wax paper and continued into my twenties.

People who lived in Hurley were miners or descendants of miners including my Grandfather Frank.   It was a hard life, and if you weren’t a miner or a lumberjack there wasn’t much else you could do.  In addition to working the mines, Frank was the local sheriff when John Dillinger was causing trouble in the area.  It’s our little piece of family notoriety. 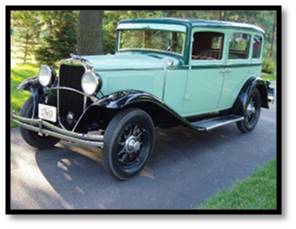 In April of ‘34 Dillinger and his cohorts were hiding out at the Little Bohemia Lodge in Manitowish Waters in northern Wisconsin.  Federal, state and local law enforcements were called to the resort, including my Grandfather who had just purchased a 1931 Dodge to patrol the town.  He and three of his deputies responded, but Dillinger escaped during the resulting gun battle.  The fully restored car remains in the family and was used in the film Public Enemies starring Johnny Depp as Dillinger.

I was glad when the year was over. I did try to fit in, but apart from time spent with my Grandparents it ranks as one of the unhappier periods of my life.  My Dad returned from Korea and we headed to the next duty station; the newly formed NATO/SHAPE headquarters outside of Brussels Belgium.  I was not sorry to be leaving and would return only three more times.

Two summers ago I was visiting my cousin in Wisconsin when she offered to drive us up to Hurley and I surprised myself by agreeing to go.  It had been thirty years since my last visit.  The ride through the Upper Peninsula was beautiful—lakes, rivers and forests as pristine now as they were then; although I never appreciated them then.  I stood on Silver Street, a shadow of its former self, noticing how many businesses were closed and gone.  The population was just over 1500 and they were down to 25 bars.

I was in a town like so many small towns across America.  It had been filled with Mom and Pop businesses run by hard working people with a lot of civic pride.  There were never any big-box stores or chain supermarkets.  The stores I remembered were family owned and operated and one by one they had slowly and heartbreakingly faded away. 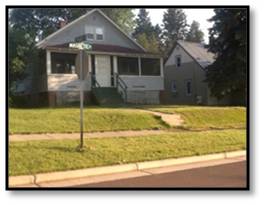 My grandparents’ house looked so much smaller than I remembered it.  The porch was gone, it was a different color, and there was no garden.   The angst I felt at 14 was gone too, replaced by memories of a big house with a wrap-around porch, real wicker rocking chairs and a large vegetable garden.

This is where my Grandmother taught me to sew on her Singer treadle sewing machine and where I learned to make the traditional Cornish pasties the miners used to eat.  On Sunday nights we watched Ed Sullivan and in the summer I sat on that porch with a cream soda and an embroidery hoop learning to cross stitch.   I suddenly understood why my mother had wanted to come home.

Our day ended with dinner at one of Hurley’s oldest (1923) family-owned restaurants, the Liberty Bell Chalet, and we drove back with a Lake Superior sunset on the horizon.  I was glad I had made the trip.

I re-discovered a great deal of small town America history in Hurley, and a little bit of my own.