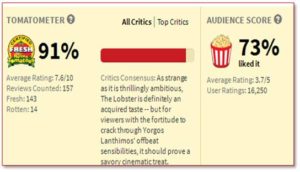 Sometimes when I check Rotten Tomatoes to find out whether a movie is worth the ticket price, I see a distinct difference on the Tomatometer between how the critics rated it versus how the actual audience reacted. Sometimes it tilts one way, sometime the other.

The Lobster on Tomatometer

In the case of The Lobster, the imbalance of Tomatometer scores comes from its excellent reviews versus the less enthusiastic audience scores. A 73% Liked is still high, however, so we decided to go with the critics. We caught this minimalist pseudo-science fiction movie over the holiday weekend and I wish I had eaten  lobster rolls instead.

To be fair, we had seen the trailer and I thought the idea behind the movie was interesting and certainly original:

In a dystopian near future, single people, according to the laws of The City, are taken to The Hotel, where they are obliged to find a romantic partner in forty-five days or are transformed into beasts and sent off into The Woods.

Get Your Mojo Working

So, okay, single people, get your social mojo working or you’re in deep doo-doo. This could be fun, right? 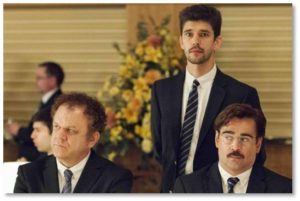 Well, not so much. The premise is fine. There’s nothing wrong with the cast: Colin Farrell, Rachel Weisz, Ben Whishaw, John C. Reilly, and the excellent Olivia Colman, just off her stint as an MI6 agent on The Night Manager.  So what’s the problem?

First, The Lobster is set in a hotel located somewhere in Scotland (I think. It was filmed is several European countries.) where the sky is always gray and it rains frequently. This establishes a gloomy, oppressive mood that permeates the entire movie.

The real problem , however, lies entirely in the direction. Yorgos Lanthimos turned the film into a virtual commercial for Prozac. The characters lack energy and anything approaching enthusiasm. The men and women, forced into proximity and social interaction, show a distinct misanthropy and disinclination to even chat. The hotel is filled with people who walk around underneath their own personal cloud that rains on them all the time.

A Flat Affect and Universal Ennui

When they speak it’s without any inflection. To say they have a flat affect doesn’t begin to describe the ennui, much less how difficult and unpleasant the characters are. In this situation, I would be working the room, chatting up the guys, flirting a little here and showing some spark there. If I only had 45 days to make something happen, I would be rocking and rolling to stay human.

But no. One can understand why one man, only a week after his wife’s death, would be sunk in despair and unlikely to find anyone else interesting. But the rest of them have no such excuse. After all, there’s a time limit on their stay in the hotel and a judgment day on which they will enter the Transformation Room and emerge as the animal of their choice. The title comes from the critter that Colin Farrell’s protagonist, David, chooses in advance for reasons that are logical to him but make everyone else shake their heads. Lobsters may live for a hundred years but they also live in the cold dark depths of the ocean and may get dropped into a pot of boiling water.

British Humor Behind the Potted Plants

I got the feeling there was some British humor lurking behind the potted plants in that hotel lobby but I freely admit that I don’t get British humor. So I found most of The Lobster boring, depressing, and distinctly unpleasant. If you do enjoy British humor you may find this movie hilarious and as enjoyable as the critics say.  A.O. Scott of the New York Times calls it the director’s “masterpiece.” Oh, please. It’s only his third movie and the first one filmed in English. That’s hardly a significant body of work. 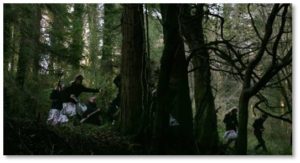 I am really good at suspending disbelief but couldn’t quite make it happen this time. In a movie so depressing why bother?  Instead I kept asking exasperated questions:

These are not the questions a viewer should be asking while the film is still onscreen. After an hour I was checking my watch—never a good sign—and couldn’t wait to get out of the theater when The Lobster had finally clawed its way to a dismal end. 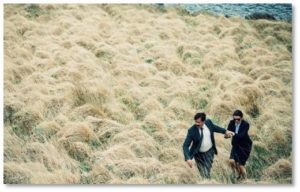 Ru away, run away

It may be, as Mr. Scott writes, “a protest against the standardization of feeling, the widespread attempts — scientific, governmental, commercial and educational — to manage matters of the heart according to rational principles.” If so, the protest did not engage me in the least. I would rather have a government agency match me up with a stranger than watch this weird little movie again.

The Lobster has grossed only $1,590,047 in three weeks on a €4 million production budget so I don’t expect it to be around long. Don’t rush to the theater before it disappears.

The Lobster was not a good start to the summer movie season for me but I hope to see better films in the next few months. In the meantime, don’t be trapped by The Lobster’s good reviews. Run away, run away.